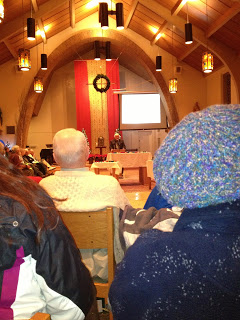 Children are our most precious resource. They are our future as well as reminders of our past. They embody our hopes yet their vulnerability makes them available prey for those who seek domination over others.

Ten years ago this evening, Peter Thompson and I were here showing photos of Iraqi children we had met – having just returned from Baghdad three months before our war-of-choice began. We don’t know the fate of most of those children but all of them had their lives severely impacted by the actions of our nation and its military machine. So part of me comes with a heavy heart tonight, remembering their smiling faces, their eagerness to have their photos taken – wondering if they were allowed to make it to their teens and early 20s, and if so, with what physical, emotional, and psychological scars?

So the opportunity presented itself this year to return to Iraq, now that most of the US troops are gone and we are no longer at a state of war with them (although war was never declared – small comfort to those on the receiving end of bombs and bullets); some of us received a beautiful engraved invitation from the Governor of the Province of Najaf. My immediate response was “let’s go!” Originally planned for March, it didn’t happen until November after messages of disappointment that the cultural celebration we were invited to participate in had been postponed and then canceled.

Many of you know that Minneapolis is a Sister City with one of the largest cities in Iraq, the holy city of Najaf. This city is about two hour’s drive from the capital city of Baghdad and has an older, neighboring city, Kufa, which lies on the Euphrates River making it very similar to our own Twin Cities. Najaf is home to the world’s largest cemetery because it is also the location of a shrine to one of Islam’s most revered leaders, Imam Ali, the son-in-law of the Prophet Muhammad and many devout Shia Muslims wish to be buried near his shrine. The photos being shown tonight were taken in the Province of Najaf at schools and neighborhoods I visited last month with friends from the Iraqi & American Reconciliation Project.

When we hear the Bible story of the birth of Jesus, what follows quickly is a story of the visit of “Wise Men from the East” who have heard of a special child being born. Empires are always fearful about anyone who could disrupt the present order, especially the potential of other leaders arising who could contest their domination of others. Herod, the King appointed as a vassal ruler for the Roman occupiers of the land we now know as Palestine and Israel, owed his power and wealth to the Romans and would tolerate no opposition. If “Wise Men” traveled a great distance to “worship” at the birth of a new leader, this baby was a threat unless he was part of Herod’s “royal” family. Therefore, an order goes out from the palace to kill all the newborns. Joseph and Mary, having been warned in their dreams, quickly take their infant son out of the country. But, the story goes, many infant children did not escape the terror of an empire bent on keeping power over others – even if the victims were children under the age of two!

Many here tonight know about the war against Iraq in 1991 that was followed by 13 years of brutal economic sanctions against the Iraqi people. Some of you know how those economic sanctions destroyed much of Iraq’s economy, devaluing the currency to such a drastic degree that many children dropped out of school to try to earn a little money to help feed their families. Iraq lost many, many children, a whole generation to that cruel policy kept in place by the US and British governments. United Nations experts estimated that more than ½ million children died unnecessarily because of those policies. This service tonight is the 15th year we have gathered to remember the young victims of war. It was that cruel, relentless policy of economic sanctions which led Marie and others to begin this service of remembrance and reflection. Tonight, even as we gather, those economic sanctions are now directed toward new victims in Iran.

Most Americans think the second Iraq War is over since most US troops left Iraq last December. The past several years had witnessed far fewer deaths than the period of intense fighting by people labeled as “insurgents” which occurred primarily during 2005 to 2007. But the aftermath of war and the chaos following the devastating destruction of the nation’s infrastructure continues. Despite billions and billions of US tax dollars squandered under the promise to rebuild Iraq into a flowering democracy, there still is only intermittent electricity available from the national electrical grid which must be supplemented by neighborhood generators, privately owned, and sold to those who can afford the greatly additional charges. The water flowing from the taps is polluted and contaminated, a toxic stew for the poor who can’t afford the cost of a water-filtering device and the weekly and monthly costs of replacing filters.

But less I paint too dark a picture, there was another startling sight: Iraqis who had every right to sneer and scorn visitors from the nation which had visited them with such wanton destruction welcomed us last month with not only open arms but warm hearts. We were lavished with so much food and affection we felt like royalty. The fact that we came unarmed, as friends rather than conquerors, was deeply appreciated. I could go on about our visit but that will have to happen another time since our focus tonight is on the children.

Many of the children we met when visiting schools where the Muslim Peacemaker Team had installed water filters had not even been born before the US campaign of “Shock and Awe”. They never lived under the brutal dictatorship of Saddam Hussein. Although the effects of war linger, they are no longer victims but survivors who need and want partnerships with us. The older high school students and young adults in the colleges we visited were eager to try out their English with us. Many are seeking exchange programs to study abroad to widen their horizons. But there remain many challenges. Visas to come to the US are very difficult to come by and the cost is prohibitive for most who continue to struggle economically.

In a poor neighborhood we visited, the families lived in “homes” they were allowed to build as squatters – but they did not own the ground under those structures. A family that graciously welcomed us in apologized when the lights went out so we were forced to meet outside so we could see one another. As the men sat and discussed in one area, the women and children gathered by their kitchen area where they learned that some of the children did not attend school because they couldn’t afford the “uniform”-dress expected of them.

This year, however, the thoughts of many Americans will be focused on the 20 innocent children gunned down at the Sandy Hook Elementary School in Connecticut two weeks ago. And we should mourn their loss as well as the teachers and other adult school staff. Maybe this loss will help us as a people gain empathy for the other Holy Innocents victimized each week in Afghanistan, Pakistan, Somalia, Yemen, and elsewhere by un-manned aerial vehicles, drones, with the names of Predator and Reaper as though they are part of nature’s own cycle of life and death rather than the macabre machinery of military domination.

The Biblical story of King Herod killing the Holy Innocents in his frantic attempt to destroy any possible competition to his political rule is how all empires react to threats they perceive. If we wish to stand with the Holy Innocents, we must stand in opposition to empire, the creator of more victims. The candles we light are reminders that even in the midst of darkness, we are called to bear witness to the light we have been given. Quakers are known for reminding us that everyone has a spark, a glimmer, a light within – that of God or the divine within each of us. May we fan, feed, nurture that spark within us, within each other as we remember the lives lost, the futures squandered, the hopes dashed by war and help us to recommit to stand with the survivors demanding an end to the violence – especially that visited on children. 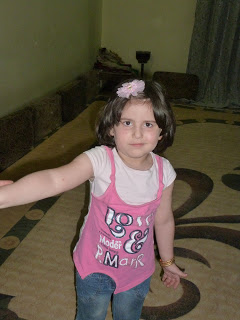 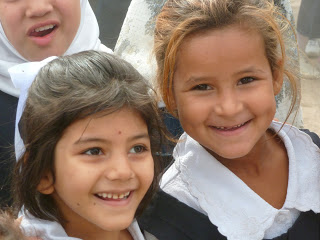 We remember the survivors of the empire’s violence – first Moses, escaping from the decree of the Pharaoh to kill all male Hebrew children, then Jesus, being taken to Egypt to escape the murderous King Herod; they were survivors. These children whose photos you see are also survivors. May we stand with them as we say a loud “No!” to those who seek to do them harm.