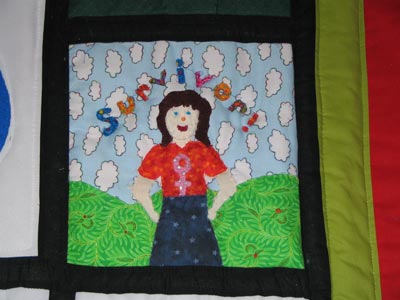 Photo of a square in a quilt made by survivors of domestic violence, displayed in MN State Capitol. Photo by Holly St. Germain, published under Creative Commons license

“Leticia” had given birth to her first child at 14, and by the time she ended up at Casa de Esperanza’s shelter she had two kids, ages two and six. In addition to the abuse and death threats she endured from her ex-partner, she found out he had sexually assaulted her six-year-old daughter.

Lydia Morley, a volunteer attorney with Immigrant Law Center of Minnesota (ILCM) Crime Victim Relief Project, described “Leticia” (not her real name) as fitting one typical pattern of the U-Visa client: someone who was sent to the U.S. by her parents to work and then send them money.

“The common thread from the women I’ve learned about in this program is that they are not in control of their own destiny,” she explained. “They have ended up being brought across the border and are under the control of a man.”

When Morley first met her client “she had all the characteristics of a victim. Once she obtained psychological help and a U-Visa for herself and her children, she became, “moved to mature quickly…she presented herself as a lot more confident than when we first met her. I felt like she was on the way to taking care of herself.”

According to the ILCM’s description of the Crime Victim Relief Project:

“Under the Victims of Trafficking and Violence Protection Act (VTVPA), an immigrant may be eligible for a U-Visa if he or she has been the victim of a serious crime, has suffered substantial harm, and is willing to cooperate with law enforcement officials regarding the investigation and/or prosecution of that crime.”

ILCM Pro Bono Director Anne Applebaum explained that “the U-Visa came about through co-advocacy on the side of advocates for immigrant victims of domestic violence and law enforcement. That is a unique partnership… The root of the U-visa is that victims of crime feel safe reporting incidents of violence to police.”

Cindy Anderson, co-creator of the Crime Victim Relief Project at the ILCM said, “What people misunderstand is why would we allow someone to stay in the U.S. when they arrived illegally. The answer is that by coming forward as a crime victim they are making our community safer… The law enforcement community was the biggest supporter of the legislation when it came to Congress.”

Advocate Rosario de la Torre of Casa de Esperanza recalled a 17-year-old mother of two who arrived at the battered women’s shelter. Having just left her abusive partner, “Esmeralda” (not her real name) was struggling to get by and support her family. In addition to these challenges, she was an undocumented immigrant. De la Torre referred her client to a pro-bono attorney at the Immigrant Law Center of Minnesota (ILCM). Now that she has successfully obtained her U-Visa through the ILCM’s Crime Victim Relief Project “Esmeralda” is the manager of a restaurant and a full-time student. Her dream is to be an advocate for other women crime victims.

Within the Minneapolis Police Department, Deputy Chief of the Investigations Bureau Kristine Arneson said, “We are very supportive of this program.” Minneapolis Commander Catherine Johnson assists with U-Visa certification for qualifying crime victims. She explained that, “We need their testimony to successfully prosecute… It helps us in law enforcement to identify and arrest those who are perpetrating violent crimes in our community…Their victim pool isn’t limited to immigrants typically and so it’s not just the immigrant community that’s being victimized…If these immigrants are afraid to come forward because of their immigration status those criminals will continue to perpetrate crimes.” When asked whether this policy is often abused, Arneson said, “The vast majority of what I see are legitimate requests, Those requests that I deny usually are because these persons were a victim of a crime that doesn’t fulfill the requirements of the act…I have only had a handful of requests that appear to have been fraudulent.”

The Crime Victim Relief Project at the ILCM has offered full representation with a pro bono attorney for 310 clients, and has successfully obtained U-Visa approval for 120 such clients. Rosario de la Torre of Casa de Esperanza describes the ILCM as “one of the strongest partners of Casa de Esperanza’s local chapter.”

One of Anne Applebaum’s pro bono clients obtained her U-Visa in 2012. Originally from Kenya, “Mary” (not her real name) had arrived on a student visa which had expired. She had two small children when she found herself in an abusive relationship. She told her advocates at a women’s shelter, “how hard it was to get away because I was dependant on the guy that I lived with.” When asked what she would tell other undocumented women in similar situations of abuse she replied, “I would definitely encourage them to apply for a U-Visa.”

Volunteer immigration attorney Jen Kowski describes her clients as “very much relieved to find they had the (U-Visa) option and very much looking forward to having a legal status so they could find better jobs to support their families and really be a productive member of society.” Since starting to volunteer for ILCM in early 2009, she has helped eight crime victims obtain U-Visas and mentored three other volunteer attorneys. While most of Kowski’s clients were women, one client was a male victim of sexual assault. Kowski recalls that his aversion to violating the law by working without permission led him to continue living in the same building as his assailants. When he obtained his U-Visa and was able to seek new housing, Kowski recalls, “You could see the sense of relief that he was finally going to get himself out of the situation.”

Applebaum concurred with Kowski’s assessment of the impact of the U-Visa, “I can’t even express how much it changes people’s lives. You can tell from your client’s face when you tell them they’ve been approved.”