I was working in the guest services division of security for the Mall of America on Sept. 11, 2001. I had been employed at the largest mall in America since July, 1992. I assisted guests visiting the mall with questions, stroller and wheelchair rental, store information, and general “good will ambassador” for the Mall of America.

The Mall of America is a fun place to visit. Most visitors are families on vacation, or people from the area. The Mall of America is only seven minutes, or 5.3 miles, from the Minneapolis/St. Paul International Airport so the mall gets lots of attention from guests on layovers.  If there are a couple of hours between your change of plane, hop on a bus or take a taxi and shop while you wait for your departure. I live 1.7 miles away.

There are dozens of hotels surrounding the great mall. The Mall of America is an attraction for conventions and business meetings. Theme hotels have sprung up around the mall for family destination vacations. 500 stores are inside waiting for shoppers and spectators. It is a consumer’s ecstasy.

That shopper paradise came to a screeching standstill on Sept. 11, 2001. I was scheduled to work that day. After the fall of the World Trade Center, the Mall of America became alarmed it would be in the line of attack. The mall closed its doors around 3 p.m. and evacuated. I was told I did not have to report for duty and to stay home. The Minneapolis/St. Paul airport closed and no flights could leave or depart. Thousands of people went to all those adjacent hotels.

The next day, Sept. 12, I arrived at my station early in the morning at the South entrance of the mall. As was standard, we held a “roll-call” in the security offices beforehand. This was very somber. The FBI had put the Mall of America on high alert for possible attack and listed the mall as #6 on the terrorist hit list.Because all aircraft was grounded, masses of people were now stranded, confused, and in fear. Stuck in hotel rooms, or airport terminals, people started to turn up in droves at the Mall of America.

But something had changed when they arrived at the mall. There was a hush, a quiet. Usually I helped people who were all excited to be there. They were on vacation or anticipating great times, food, or experiences. Now they had forced time on their hands and couldn’t get home to loved ones. This was especially apparent to people living on the east coast. They had a real desire to get back there.

People lined the wall in the interior of the South entrance, sitting on the floors. Most were on cell phones and several were crying. I heard a lot of angry shouting on cell phones as well. I became a counselor of sorts, as many came up to my desk just to converse about “the event.” I listened for hours, instead of my usual role of talking and giving out information.

I furnished free strollers to stuck-in-limbo parents and free electric carts to marooned handicapped people. Many restaurants in the mall provided deeply discounted food. Luggage was tied up at the airport, and a lot of people needed to shop for replacement clothes. And I was struck by how many came to this building because of its name.

Even the name evokes western consumerism: The Mall of America. Not only that, but its name provided some comfort that America was still standing. All over the place, the mall was a reminder of patriotism. Even my uniform had a flag pin on it. Red, White, and Blue was everywhere in the mall. I heard occasional jokes: “Maybe you should drop the name ‘America’ so it won’t get attacked.”

That night a vigil was held at the Mall of America. I think its name really hit people. Everywhere outside the mall people gathered, saying prayers and lighting candles. It was a powerful moment for me.

In the morning, the Mall of America erected American flags at the four main entrances. They appeared overnight.

In 2008, I received a scholarship to finish my Bachelor’s Degree at New School University in New York City’s Greenwich Village. At the end of August I arrived with my backpack, college syllabi, a bed found on Craig’s List, and moved into an 1800’s apartment with two college roommates.

I walked to campus through the Village passing “Tiles for America,” on Greenwich and  7th Avenues just down the block from my apartment. Tiles for America began on Sept. 12, 2001. Crowds had gathered at St. Vincent’s Hospital prepared for the influx of survivors from the towers. There weren’t many, however.

A pottery studio, “Our Name is Mudd,” started asking studios across the country to make memory tiles. Studios across the United States held individual fundraisers in which tiles were created for the NYC Memorial. Soon, case upon case of tiles began to arrive.

What was once a small section of fence has grown to encompass more than a full city block. Approximately 6000 tiles now hang on the Memorial.

On the two anniversaries of 9/11 that I was in New York, crowds of people gathered at the Tiles for America, often leaving flowers. Tour buses stopped and people got out to touch and read the tiles. “Tiles for America” is now on the Greenwich Village Historic District National Register. 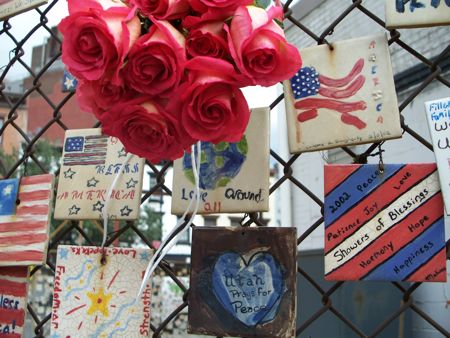 As I lived in New York City, I explored Manhattan. At Battery Park, I found a crumbled up sculpture called “The Sphere.” For three decades, this sculpture stood in the plaza of the World Trade Center as a symbol of world peace. It was damaged during 9/11, but still survived. The Sphere was placed in Battery Park on March 11, 2002 as a “temporary memorial to all who lost their lives in the terrorist attacks at the World Trade Center.” On Sept. 11, 2002 an eternal flame was ignited at the sculpture. 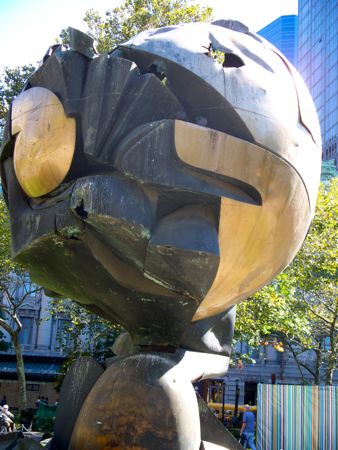 “The Little Chapel that Stood”

I spent considerable amount of time exploring St. Paul’s Chapel, located in historic Trinity Church on Broadway at Wall Street, which sits directly across from Ground Zero. This chapel opened in 1766 and George Washington took the oath of office to become the first President of the United States here.

Despite the massive explosion of the World Trade Center, and their subsequent fall, not a single window broke. The Chapel became a round-the-clock relief ministry to the more than 14,000 volunteers in the recovery effort.

“From September 2001 to May 2002, St. Paul’s Chapel opened its doors to firefighters, construction workers, police officers, and others for meals, beds, counseling, and prayer. Medical personnel massage therapists, chiropractors, podiatrists, and musicians transformed the chapel into a place of peace, rest, and reconciliation,” says their website.

The Chapel has become a museum of sorts now, with the original beds for the rescue workers still there, stuffed animals included. Hundreds of firefighter and police patches are in an exhibit called “Healing Hearts and Minds.” Banners still fly and tributes to fallen rescue workers are in display cases.

A 70-year-old sycamore tree that fell in the church grounds with the impact of the collapse of the towers has been preserved in a sculpture called “Trinity Tree” by artist Steve Tobin. Tobin took the stump and the roots of the tree and made it into a red bronze sculpture that stands in the church courtyard. 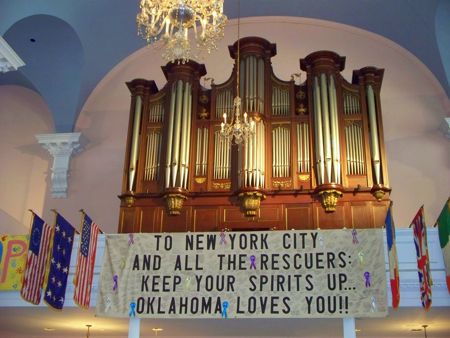 I walked the area of Ground Zero many times and the most significant for me is the wall where the FDNY Memorial, or “343 The Bravest,” modestly sits. There, 343 faces look at you; faces that lost their lives on 9/11. 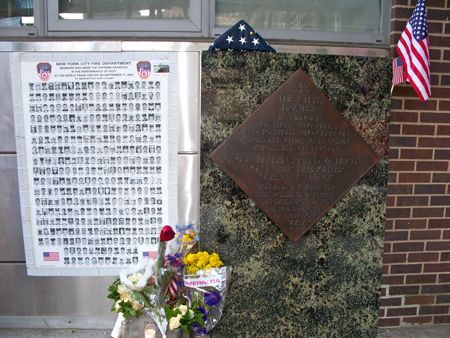 There are two 9/11 museums: one is for cost, but a newer one is free and just as good. The Tribute WTC 9/11 Visitors Center charges a $15 admission. The free one, 9/11 Memorial Preview Site, is full of good historical items and content with displays of the future of Ground Zero.

The Empire State Building was seen outside my bedroom window, turning red, white, and blue on anniversaries of 9/11. From my other window, two beams, Tribute in Light raise up from Ground Zero into the night sky.

My daughter, Lindsay Teed, is part of an ensemble cast in the play play Dust. This play focuses on the impact the events of 9/11 had on the young people of that generation just coming of age. 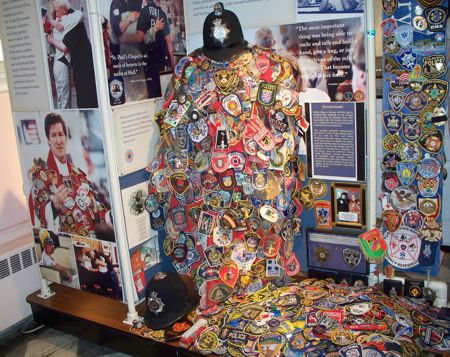 (Above) Patches on display at St. Paul’s Chapel, NYC. (All photos: Barb Teed) 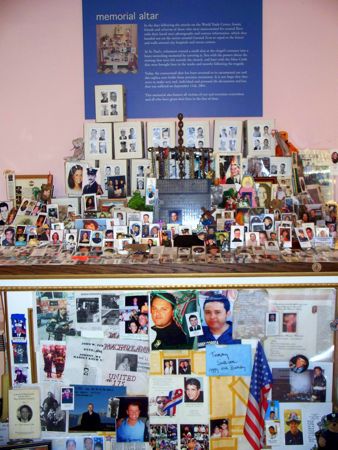 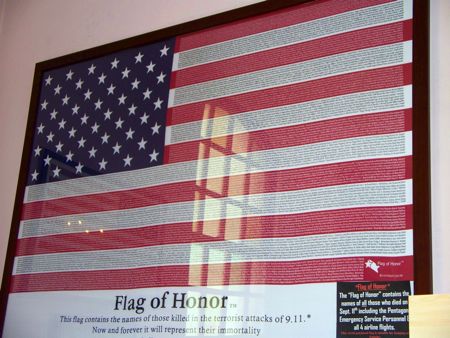 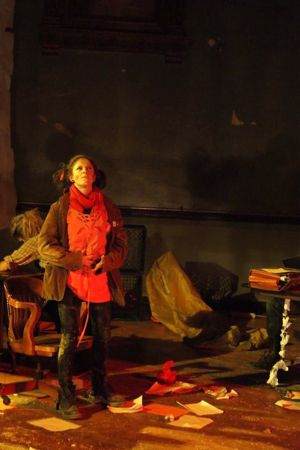 (Above) My daugher Lindsay Teed in the New York City play Dust, about the 9/11 generation coming of age. (Photo courtesy Lindsay Teed)