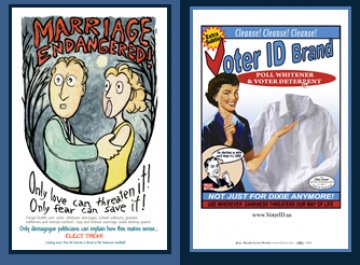 Proponents of voter identification laws argue that we need state-issued identification cards to prevent voter fraud. But, there is no evidence to suggest this. In fact, in Minnesota, no one has ever been convicted of voter impersonation. It is increasingly clear that Republicans are using voter repression laws as a political strategy to control who holds office with an agenda to pass conservative legislation across the board.

What these laws will do is limit voter participation.

Indeed, there have been cases of felons voting, however, these would not be prevented by requiring photo identification of voters. What do these laws mean for Minnesota’s high voter turner outs? And why are opponents of both the marriage and voter suppression amendments not working closely together? Are we working for justice or “just us? How is the GOP strategy playing out locally?

After the jump, listen to my discussion with Ricardo Levins Morales and Ilhan Omar on local efforts to defeat the voter suppression amendment on the ballot in November’s election. Listen, as my guests and I make the case for an intersectional movement in defeating both amendments. [Audio below]

Volunteer to defeat the voter repression amendment: Our Vote Our Future