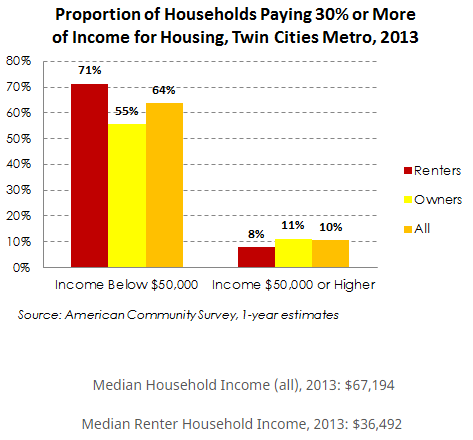 This is part 3 of a series on the interaction between the rental housing market and rents. Read part 1, “How I Set Apartment Rents,” and part 2, “Housing Markets? Humbug!“

I’ve dedicated the last 15 years of my life working on affordable housing policy. Mostly, I’ve worked where some sort of subsidy helps make it (more) affordable.

In this post, informed by what I’ve learned about the scope of our problem and the inadequacy of existing subsidy programs, I’ll share actions and policies that I think could ameliorate our affordable housing problems.

It’s common knowledge we have an affordable housing problem. It might be surprising to learn just how bad the problem is. I had a lengthy conversation with Leigh Rosenberg of Minnesota Housing Partnership trying to find a sourced number of people needing affordable housing, and learned why it’s hard. She offered a short-cut. In the Twin Cities,

“Over 91,000 renter households and 72,000 owner households now pay more than half of their income for housing in the Metro area. The burden falls especially heavily on lower-income area residents.”

Using HUD’s 30% of income definition of affordable, 71% of renter households with incomes below $50,000 a year are “rent burdened.”

And, here you can see where those people paying so much of their income in rent live. I want to figure out how we actually solve this huge gap, and I’ve learned that we can’t do it with subsidy. (Maybe I should say, “won’t” as there isn’t the budget or political will to spend the ballpark $7 billion it would take subsidize construction of homes to assist those 91,000 renter households paying more than half their income for housing in the Twin Cities Metro).

How much subsidy is available?

When it comes to subsidizing apartment construction, last year had unusually high funding levels, and we funded 3,500 units. To reinforce how inadequate that is, that number includes new construction and rehabilitation of existing housing — across the entire state! In part 2 of this series, I argued we need 2,210 units in Minneapolis alone (at any price point) to get to a more tenant-friendly market.

We also offer subsidy through rental assistance. Funding here is equally inadequate. In February, the Met Council opened up their waiting list for Section 8 vouchers for the first time in EIGHT years. 36,000 people applied, and only 2,000 of them will get on the WAITING list. They’re likely to be waiting for up to three years. The Minneapolis list still has 9,000 people on it, and it was last opened in 2008.

Yikes. I hope you don’t need that assistance.

Who gets the subsidy?

A variety of programs serve people with a broad range of incomes. On one end, there is supportive housing for people who tend to benefit from more services – formerly homeless individuals and families, people in recovery, people leaving institutions. Rental assistance programs tend to serve people earning up to 60% of “Area Median Income,” or AMI*. That’s $64,000 for a family of four. Many home-ownership programs help families making 80% of AMI and some even stretch to 120% of AMI. We are not going to subsidize our way out of this problem, and it seems to me there might be better ways to serve moderate-income people who currently struggle to afford adequate, safe housing. Personally, I’d like to reserve the subsidy for people need it most.

Implementing any one of these will help, and if we do all three, we’ve got a response that might even match the scale of our current housing cost burden problems. (Remember, this is in addition to the subsidized housing we are already building.)

How Does it Work?

Raising minimum wage helps reduce the number of very-low-income people — putting more people in the ranks of those who can afford housing. Note that if we raise minimum wage but don’t build more housing, the most likely outcome is that people bid up rents on existing housing. The only winners in that scenario are the owners who get larger profits.

All three together frees up the subsidy we’re currently spending to help professional families buy first homes and moderate income people to rent $1200/month apartments. Then, we can offer it to people who the market really cannot serve.

The minimum wage change is fairly straightforward, given political will.

Building the housing will have to be done by the private sector. Removing barriers (for example, lack of developable parcels) and allowing lower-cost units (for example, smaller unit sizes, faster approvals process) encourages the private sector to create more housing. Both approaches simplify project financing by lowering risk of a project being derailed, the market changing before the project is complete and occupied, and simply by shrinking loans.

So what policies could remove barriers and allow for lower-cost housing to be built? It’s a list of policies that have gotten more and less play on streets.mn.

I’m sure this isn’t a complete list. Help me out in the comments. What an you add?

*Minnesota Housing coordinates an annual Consolidated Request for Proposals, where most Minnesota agencies and organizations that award subsidy jointly review proposals and application processes. They jointly funded 3,650 units in 2014, 1630 units in 2013, and 3100 units 2012.