An analysis of loan data conducted at the University of Minnesota Law School has found that minorities are more likely than whites to be turned down for a mortgage or refinancing in the Twin Cities.

The report also suggests that while banks may have justifiably tightened credit standards, they are cutting off credit not just to questionable borrowers, but to people whose income would appear to qualify them for a loan.

The report says the biggest banks have the worst track records, claiming that Wells Fargo made up a fourth of the lending shortfalls.

In a statement, Wells Fargo said: “Wells Fargo has always been a leader in fair and responsible lending, and lending in all communities is a focus for our company. As a result, Wells Fargo is by far the largest mortgage lender in the Twin Cities; overall, in lending to borrowers representing all racial and ethnic groups, and in lending in diverse and minority communities.”

U.S. Bank said: “U.S. Bank is committed to lending to all borrowers in all of the communities we serve, and we take our responsibility very seriously… In all cases, borrowers are judged solely and consistently on financial criteria and not on race. Qualified borrowers are receiving loans.” 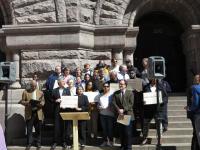 KFAI’s Sharon Chen and Rico Morales attended a press conference outside Minneapolis City Hall, and filed this report. [Audio below]