Here in NoMi, we’re heading into somewhat uncertain territory. With redistricting already facing legal hurdles, precinct caucuses for senate district 58 are scheduled for February 7. Linda Higgins is stepping down from her seat as our state senator, and Bobby Joe Champion has announced his intention to run for that seat. Raymond Dehn and Terra Cole have announced their candidacies for Champion’s seat, but might not even live in the district depending on how lines are redrawn. Joe Mullery is running for re-election as well.

(I’m covering known DFL candidates because they are the ones most likely to win election, but readers can inform each other about others who are running.)

So the conundrum as I see it is that we’re holding our caucuses before we know for sure what the boundaries for legislative districts are. Right now the best estimation of those boundaries is shown above. Our senate district would include the Downtown East neighborhood and parts of Downtown West, the North Loop neighborhood, Bryn Mawr north of Highway 394, and all of NoMi.

With the court case maps, I was initially confused because they don’t call us district 58 anymore. We’d be district 60 if those take effect. Under that proposal, our district is divided largely among Broadway. It looks like Mullery’s district would extend from the northwestern edge of the city down to Broadway, with the “tangletown” section of Jordan left out. That area, with Willard-Hay, Near North, Sumner-Glenwood, Harrison, and downtown/Bryn Mawr would be the second representative district.

Let’s face reality here; we live in essentially a one-party part of town. Most likely a person associated with or nominated by the DFL party is going to win each of these three elections. Whether you like that or not, it’s still obvious that the person with the nomination far and away has the advantage. And it’s hard enough to feel as if our system is truly representative when that nomination process happens at the hands of maybe a few hundred people. But now at least some of our candidates may not even know which district is appropriate for seeking the nomination until after it’s too late.

I wish I had a solution to this dilemma. The only advice I can give right now is that people get involved and stay informed. It’s going to get confusing. 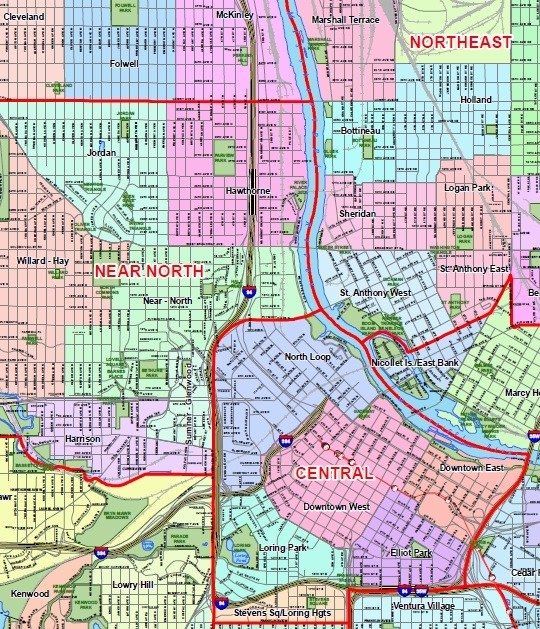