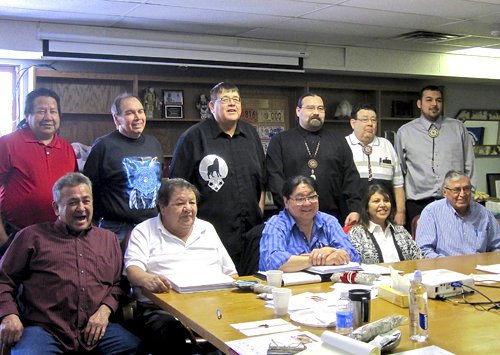 RED LAKE, Minn. – Although the subject was not on the printed agenda for the Red Lake Tribal Council at the regularly scheduled monthly meeting on Jan. 13, recent acts by the federal government concerning Indian tribes, hemp and marijuana prompted several tribes to explore the feasibility of growing medical marijuana and industrial hemp.

Red Lake Chairman Darrell G. Seki, Sr., added the agenda item shortly after the call to order. He said he felt the federal ruling should at least be discussed. Seki cited several tribes that are looking deeper into the issue and mentioned fewer yet that were actually taking action.

Immediately, Red Lake citizen and Gardening Tech at Red Lake Traditional Foods David Manuel asked to address those assembled and spoke of the economic advantages to getting involved with at least industrial hemp and possibly medical marijuana. “Give me one of those three green houses near the elementary school for a year and I’ll give you five million dollars,” Manuel said. He offered no plan nor statistics for that claim.

Nearly everyone on the 11-member tribal council weighed in, including several chiefs and Red Lake members seated in the audience. Discussion ran the gamut from favorable to cautionary for both industrial hemp and medicinal marijuana.

Council member Roman Stately said toward the end of the discussion, that he “knew very little about either hemp or marijuana. We need a feasibility study. Lets learn about it.” Several council members and citizens agreed that they just were unfamiliar with the issue and that the tribe should explore the matter from a legal, economic and other issues surrounding the federal memo.

It was then moved and seconded, then passed unanimously to direct Red Lake Economic Development and Legal Departments to conduct a feasibility study and fact-finding mission on the issue and report back to council at an unspecified time.

Seki emphasized that whatever the outcome, no resolutions or tribal laws will be enacted without consultation with the membership both in informational meetings and eventually in a referendum … a vote of the entire nation. “Whatever we do, it will be done very carefully,” he said.

Seki, who holds informational and brainstorming sessions in each of the four Red Lake communities from time to time, said that for the next series of community meetings will be conducted over a two week period in February, that he will add the issue to the agenda and encouraged all Red Lake members to participate in that and all issues of concern to the tribe.

In early December, the federal government released a three-page memo announcing that the federal government will not prosecute Native Americans tribes for growing and selling marijuana on tribal lands, even in states where the drug is illegal. Most tribal leaders have no concerns about cannabis and expressed interest in the business opportunity.

There appears to be concern that the vagueness of the language will open the door to unnecessary prosecution – especially since in one part of the memo, the U.S. Department of Justice says that the states attorneys general will still have the authority to stop criminal activity on tribal land. Red Lake, however as a ‘clouded reservation’ is is exempt from state law and answers only to Congress.

According to the memo, originally dated and sent on Oct. 28, U.S. attorneys will prosecute marijuana sales on tribal land according to the same guidelines they have adopted for the states – focusing on keeping marijuana out of the hands of organized crime, away from children and not diverting it to states where marijuana remains illegal.