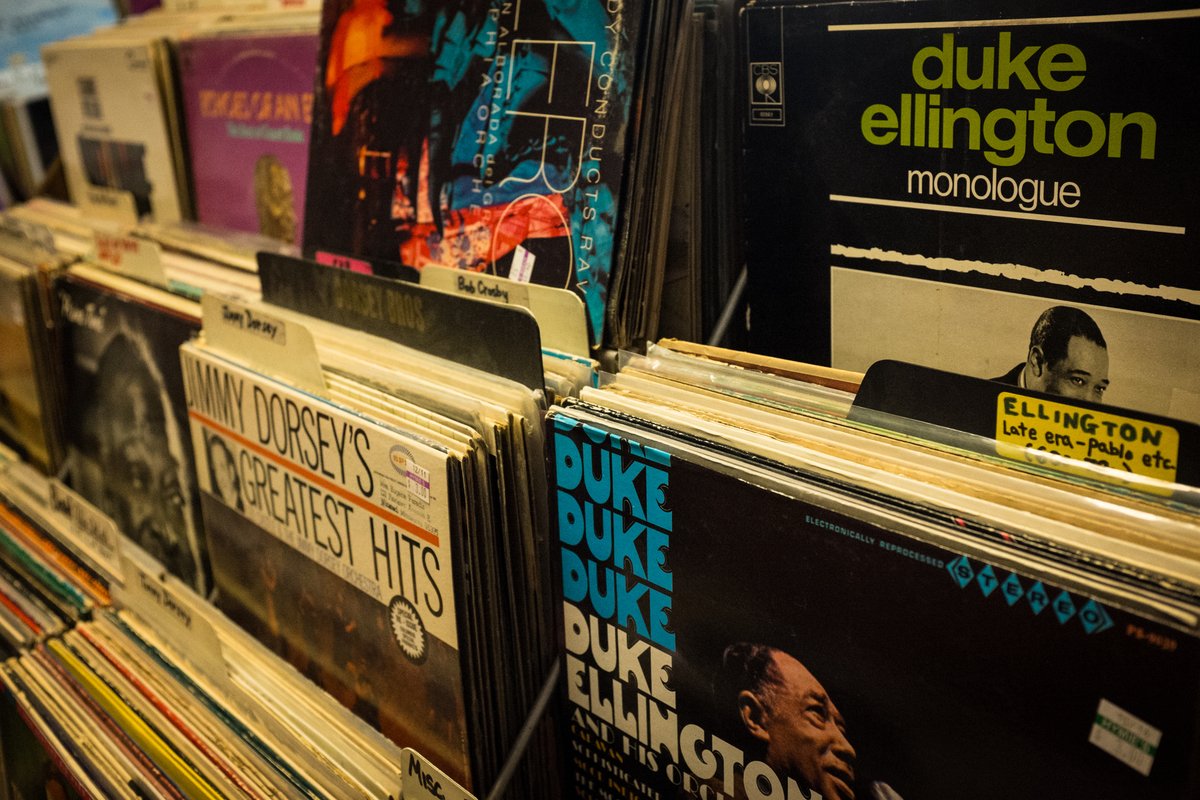 The jazz section at Hymie's Records

Almost every memory I have of my father and his mother, my grandmother, orbit around playing records and sitting together listening to music. One of my earliest memories is asking my mother to play a particular Peter, Paul, & Mary record, of pressing my ear to my dad’s tall speaker on the floor of our living room, transfixed, listening to the soothing, melancholy harmonies of “Puff the Magic Dragon” and “Lemon Tree”. To this day, there is a childlike wonder I feel when I buy a new record, and bring it home to open it and immerse myself in the album art and a new musical experience.

Record Store Day brought out crowds of people with similar stories of their own first encounters with records, as well as many folks just coming out for the events and live music put on for RSD. One recurrent theme with everyone I talked with who collects records is a strong emotional attachment to these beautiful small pieces of interactive art that we call “vinyl” and their packaging. As Ryan Cameron, owner of Let It Be Records (downtown from 1987-2005, now online only) put it, “It is a love you cannot explain. I don’t know how you’d even explain it.”

I ran into Ryan at IT Records, a newly-emerging record store in the backroom of Find Furnish in NE Minneapolis. Ryan is currently sourcing and working with IT Records as they get established. IT Records is named after the “It” in “Let It Be Records”, left over for many years after LIB Records closed their storefront on Nicollet Mall. “I’ve been into records since I was two years old,” Cameron told me. “My mom said I was able to read record labels when I was three years old. I couldn’t read books, but I could read record labels and I knew which was which. That’s kind of how I learned to read. It might have actually helped my educational skills. When I turned 16 I got a job in a record store, and that’s all I’ve done ever since.”

Danny Sigelman, a DJ and record collector who DJ’ed at three different places on RSD this year, spoke of the challenge of having worked in this space most of his life. “We don’t know what else to do, I mean, people who have worked in record stores, like myself, or some of these guys… I don’t know how to do anything else. I mean, of course I do, but you know what I mean? Like video stores. Those were peoples’ jobs and careers and professions, y’know?”

Danny also reminisced about Cameron’s LIB Records, “Ryan, he used to make every day Record Store Day. There was actually a place, downtown, that everybody went to, everyday, and checked out what was new. I was thinking about it today, and I think a lot of this Record Store Day thing is, it’s like a cultural nod, in a lot of ways. It’s sort of like the way everybody wants to be Irish on St. Patrick’s Day. All of a sudden everybody’s into records. But there are a lot of us that never really stopped going to record stores. So it’s just cool to see it full of people again, you know. That was how it used to be at Let It Be, or wherever.”

Every aspect of vinyl seemed to be represented outside of Hymie’s, a charmingly hip vintage record store on Lake Street in South Minneapolis. Their annual RSD celebration included a 2-stage performance schedule that ran all day, complete with food trucks, vendors, and a buzzing energy inside the store that was full to the brim with people browsing records and crowding into a back room where the second stage was set up. Some folks, like Justin Pryzby, one in the crowd outside Hymie’s, just came for the music: “I’m not specifically into records, I like live music. I don’t have a music collection at all besides a few CD’s people gave me.”

Others arrived for the early picks at store opening times Saturday morning. “For the last three years I’ve been doing Eclipse records,” Sigelman said. “I DJ there in the morning. And I realized after the first year that meant I got first dibs on all the records, cause I would get in there before they open up for Record Store Day. I get to, like, go to the front of the line, y’know? So this was the third year I’ve done that. And so I jumped on the train this morning, at like 8:30, went all the way to downtown St Paul, and worked my way back.”

Artists and art historians talk about our cultural artifacts in terms of (on the most basic level) form and function. I was taught in college art history classes that art is thought to be one of the basic human needs by some archeologists. The earliest human-made tools we have found are decorated, seemingly serving no function. Some believe that aesthetic beauty must be an integral need in making survival, which can be unthinkably harsh and painful, bearable to us. Records may or may not fulfill a clear functional role that can’t otherwise be filled; but certainly no one can deny that the emotional, kinesthetic experience of buying, holding, and playing records will always serve to help some of us bear the mundane and harsher realities of this life a bit more lightly.