For those not in the know, Minneapolis is proposing to construct a protected cycle track along 36th Street West this summer. This project hits near and dear to me as my wife and I will be moving into a home a mere 200 feet from this facility in exactly two weeks. Glancing over the design, this project seems like a total slam dunk. I’m not going to spend my time here debating the merits of reallocating space, arguing if cyclists pay their fair share, or anything else. Minneapolis and St Paul (any city, really) need to roll out protected cycle tracks on key corridors whenever they get the chance, and this proposal links together the Bryant bicycle boulevard with the wonderful lake trails, while giving would-be bus riders some respect on what is among the worst pedestrian facilities in the city (also removing a pointless stoplight and consolidating some redundant bus stops – huzzah!). 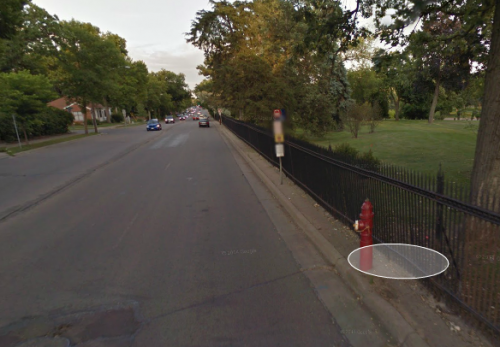 With that said, it’s my personal opinion that we can do even better than the incredibly high return project as proposed today. Conversations with project staff and city leaders (who have done a wonderful job thus far, and as always my critique is not an indictment of their work, passion, or political challenges they face) have keyed me in to a few assumptions that drove the current design. I’ll take them on one at a time.

In my mind, the convenience of motorists parking shouldn’t trump other potential benefits from alternate designs. We know that barrier-protected bike facilities are safer than ones that use paint and plastic (even if a buffer with plastic posts is a MASSIVE improvement over the current design). We also know that the northern sidewalk has built-in protection along most of the corridor to keep pedestrians feeling comfortable alongside moving vehicles: 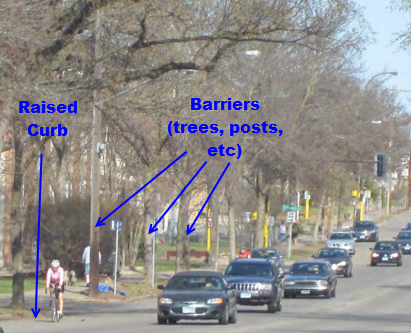 Though some sections are a bit sparse on trees.

We’re not talking about extra costs here, just moving the parking to the southern side of the street instead. Bicyclists get the advantage of roughly 9′ of parked cars separating them from the moving ones, and southbound cars leaving alleys have a little better visibility to westbound traffic. For those who like parking supply, this proposal also adds a few spaces since Lakewood Cemetery has no alleys and requires few turn lanes along the southern edge of 36th St. 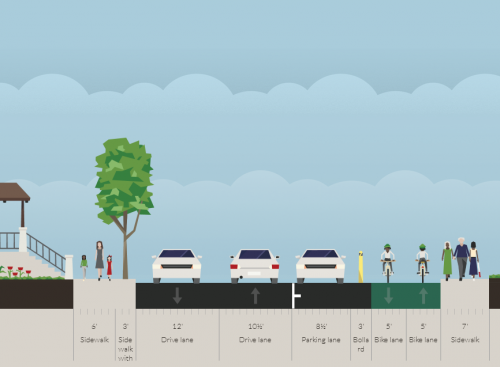 Project leaders have decided that the (fewer than current) bus stops along 36th Street will be pullouts, similar to designs across our region. However, this pinches down the expanded pedestrian area and cycle track to shared space. The net effect is basically asking cyclists to ride on the sidewalk. 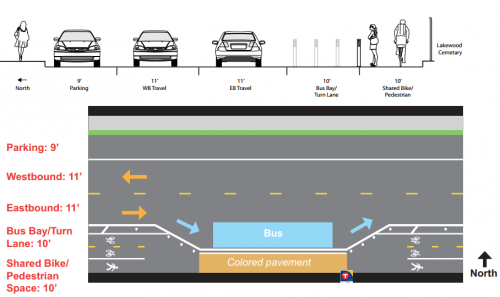 While I’m all for implementing shared space zones (otherwise called woonerfs), that design doesn’t seem appropriate in this situation. The cycle track is specifically designed to allow speedy bike travel, and mixing the two modes here seems like an unnecessary safety issue given the context.

Additionally, there’s something I’ve been mulling in my head recently regarding how we treat buses by forcing them to pull out of the traffic stream to keep auto traffic moving. Traffic engineers have no problem imposing a stop sign or stop light on moving vehicles to let other vehicles enter the stream, causing some delay for thru-drivers (let’s say 15-45 seconds depending on light timing) perhaps 15 times an hour (depending on cross-street traffic). For example, just a few blocks north along Hennepin, a light at 34th St halts southbound PM peak-hour traffic (683 vehicles per hour) to allow 18 vehicles per hour to enter the SB stream, 30 to cross Hennepin, and a few more to turn northbound (among other goals the stoplight has). Why should we view waiting behind a stopped bus to be any different? Especially when a bus could easily wait 4-8 seconds to re-enter traffic on a lane carrying 400-800 peak hour vehicles (longer if motorists are especially non-yieldy). 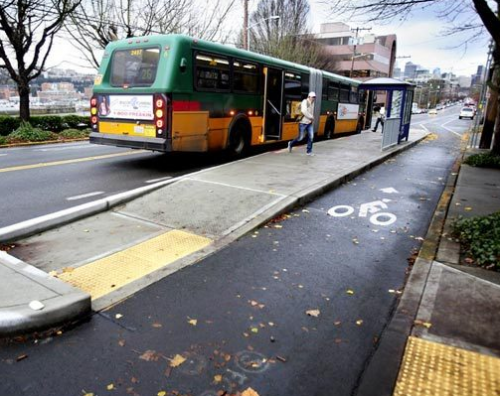 36th Street carries several buses, notably the 6 (west of Hennepin) and the 23 (east of Hennepin). Let’s use the area on the southern side of the street designated for parking as bus waiting areas where necessary. This keeps the perceived street width down while allowing buses to quickly stop, pick up passengers, and get rolling again. Longer-term (read: not Summer 2014), when the street is re-constructed, the curb can be moved out to the edge of the cycle track and extended at bus stops, with full shelters, heating, and benches): 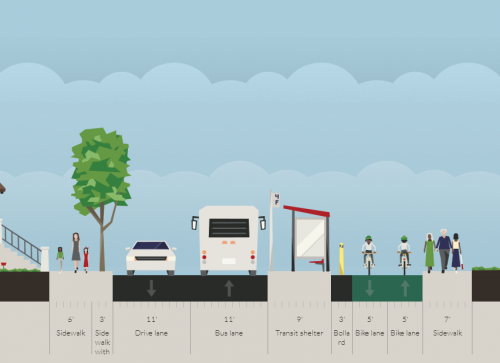 Short-term design is just paint on pavement, no shelter.

The design calls for keeping an left turn lane at Hennepin Ave, and an eastbound right turn lane at Dupont (though the plan recommends the latter as a shared bus pull-out + turn lane). By removing parking for half a block west of Hennepin and “chicane-ing” the thru-lane, we can maintain this critical left turn lane. For Dupont, I would recommend moving the bus stop to the far side of the intersection and adding a pedestrian refuge island between a narrow turn lane and the cycle track: 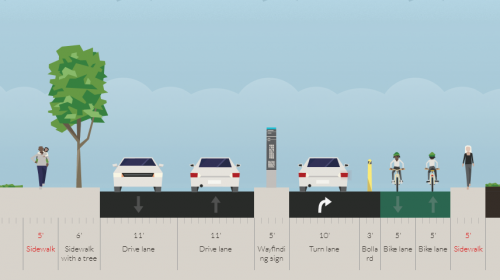 Looking east. Again, use paint in the short-term.

Traffic flow. That’s pretty much it. Losing parking on the north side eliminates the ability to create the pseudo westbound right-turn lane at Emerson project staff call for, and as noted the bus bulbs will slow down traffic once every 10 minutes when a bus comes by (during peak hours). Beyond traffic, extending the cycle track to Bryant means the loss of on-street parking from one street direction – approximately 25 spaces (if my Google Map extrapolating is correct). This is potentially harmful since the area between Colfax and Aldrich along 36th St has some great local businesses that rely (partially) on street parking. Of course, there are solutions to the issue of crowded street parking, notably extending meters into the neighboring streets to ensure available supply for patrons (plus, bicyclists shop and eat, too).

In any case, this project really is a major win for Minneapolis, its residents, and businesses, even as proposed. If you think these recommendations make for an even better, livable, safe street that prioritizes pedestrians and cyclists, pass this post along to Lisa Bender and the project staff. Thanks, everyone!