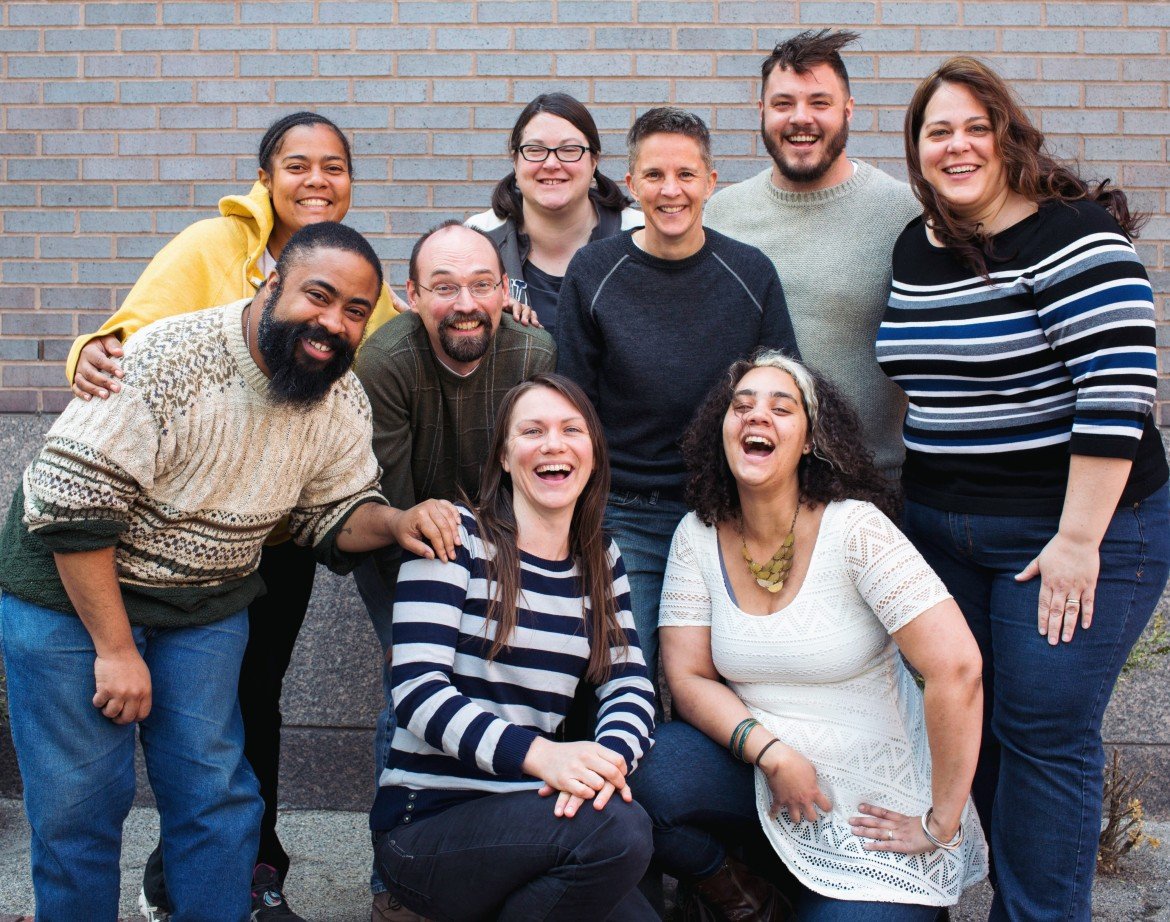 RECLAIM is an organization in flux. Change has been the natural state of being for the nonprofit for all of its seven years providing mental health support to queer and trans youth in the Twin Cities. This latest change has been one of its biggest: a change of address.

Until recently, if you wanted to get to RECLAIM, you had to seek out its Uptown office. Staff who remember it generously describe it as a former residence possessing “vintage charm.” They shared this building with a few other practitioners and businesses, and to top it off, the office was located up a flight of stairs. A healing journey at RECLAIM literally began with an uphill climb.

That is, until Dec. 1. After a year of searching, RECLAIM staff found a new home. Founder and senior therapist Janet Bystrom couldn’t be happier. The move isn’t just a change of scene. It’s a transformation. With this space, it’s poised to triple its client capacity, become far more accessible and expand its services.

“I’m overjoyed with where we are,” she said. “Just overjoyed.”

RECLAIM’s new home is in St. Paul, just off University Avenue at 771 Raymond Ave. Interim Executive Director Autumn Brown said they never originally planned on leaving Minneapolis, but as soon as they considered the idea, it started to make more and more sense. The new location sits at a nexus of public transportation, and even if the distance is physically longer for some of their clients, she said, their commute often ends up being shorter.

Most of the excitement, however, happens inside the doors. 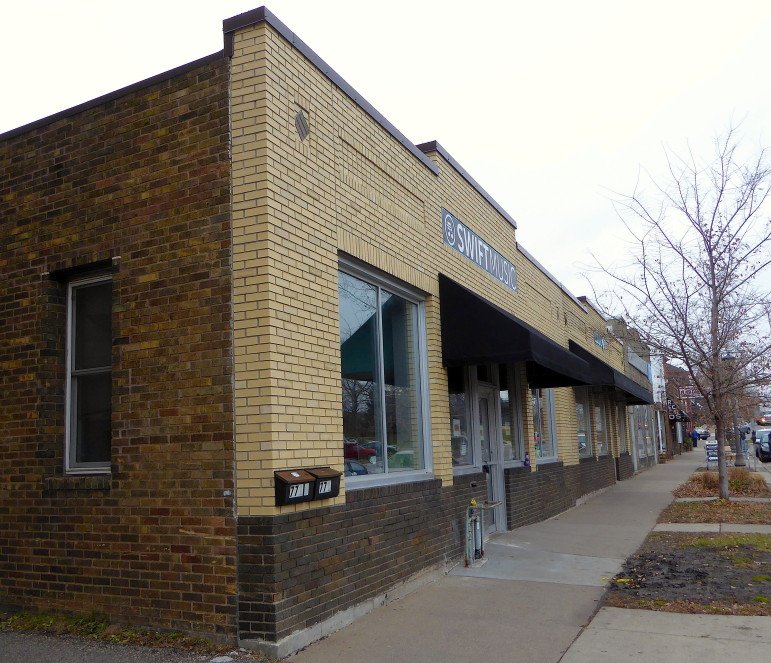 RECLAIM’s new home used to be the Swift School of Music, and some of that artistic spirit is still in the space. Photo by Hannah Jones.

“It’s been really fun, actually, to see how clients respond when they walk in here,” Brown said. “Their words are usually literally, ‘Oh my God, I did not expect this.”

Where RECLAIM now calls home used to to be the Swift School of Music, and some of that artistic spirit is still in the space. The floors are gleaming hardwood. A high-ceilinged front lobby leads back into a second waiting room just for clients. There’s a parking lot in the back, and even a performance venue in the basement.

On top of it all: a kitchen, and not one, but two bathrooms.

Brown’s office is right in the center of the front lobby. Her door has a clear glass pane, but it’s almost always open anyway. At RECLAIM, accessibility is one of the biggest priorities. The new space has wheelchair-accessible entries and bathrooms, and quiet, warmly lit environments designed to prevent overstimulation. The majority of their clients don’t need these accommodations, Brown said, but that may just be because they were never available to them before.

“We want to anticipate needs as opposed to adapting to the needs of clients as they arise,” she said.

While they may not have everything right already, they’re always going to be working toward that goal. That’s what RECLAIM is to her: a series of journeys, for clients, staff and the organization itself.

“It’s not that there are people who are broken and need to be fixed and people who aren’t,” she said. “We all have wounds that need healing. Everyone’s included into that work.”

RECLAIM is all about the healing that surrounds identity. Its immediate goal is to provide caring and competent mental health services to queer and trans youth, because historically, the mental health field has pathologized differences in gender and sexuality. It’s not that things aren’t changing, Brown said – but there’s plenty of unmet needs still out there. That’s why RECLAIM’s also using the space to train other practitioners, in hopes that they can “seed” Minnesota with professionals who understand the needs of these young people.

According to staff, about 90 percent of RECLAIM’s clientele come to them fresh from other therapists, who wouldn’t or couldn’t meet their needs. Ilana Sperling was one of them. She now works as an intern in an office kitty-corner to Brown’s. She had been going through a tough time until she began individual therapy at RECLAIM several years ago.

“I’d gone to a bunch of places in the Twin Cities,” she said. “RECLAIM was the first place I found for therapy where I felt respected and seen.”

These days, she’s working on RECLAIM’s communication materials and creating a new intake system for clients. She also co-facilitates the gender support group. Every week, she said, the youth in that circle amaze her.

But more and more, she’s seeing rosters and waitlists filling up. Before the move and expansion, RECLAIM had to turn away two-thirds of its potential clients. With more space and staff, it can take on more people. But even that might not be enough in the near future. Brown can’t shake the feeling that they’re only “scratching the surface.”

“The reality of the experience we’ve been having is that it’s all happened even without doing major outreach about our services,” she said. “I expect we’ll find that even as we triple client capacity, we’ll find that there’s additional need.”

But, their first priority, Bystrom said, is depth rather than breadth. They want to give the best quality care they can. The need for a safe social space is out there, too, and Brown spoke of potential partnerships with other area nonprofits, like the Link and Shades of Yellow. There are many ways forward, and not all of them are certain, but the overwhelming feeling is excitement.

“People can see that we’re growing, and they respond positively when they see that,” Bystrom said. “Now, we really have a place where we can feel ownership.”

RECLAIM’s expansion has been exhilarating for staff and clients, but it’s just the latest step of many that brought it where it is today. They couldn’t have gotten this far, Bystrom said, without friends.

“What makes RECLAIM really unique and special is how loved and supported it is by the community,” Bystrom said. “That’s the whole reason RECLAIM exists to begin with.”

RECLAIM began in 2009, right after two other LGBT support and community center programs – District 202 and Bystrom’s former practice, Face to Face – were cut. The recession was taking a heavy toll on services for queer and trans youth. But rather than let them go quietly, Bystrom and the surrounding community rallied and gave what they could. People donated small sums of $25, $50 and sometimes $100; not just people in the LGBT community, Bystrom said – all kinds of people.

Today, the same grassroots support keeps RECLAIM going and growing. On Give to the Max Day on Nov. 12, RECLAIM received $12,000 in donations, including an anonymous donation of $5,000 made specifically in Bystrom’s honor. Even as the organization keeps changing, that aspect of it has remained exactly the same.

“It brings tears to my eyes,” she said.

All together, it’s almost enough to pay the rent difference for RECLAIM’s new home: about $13,000. Brown called the whole thing “magical.” 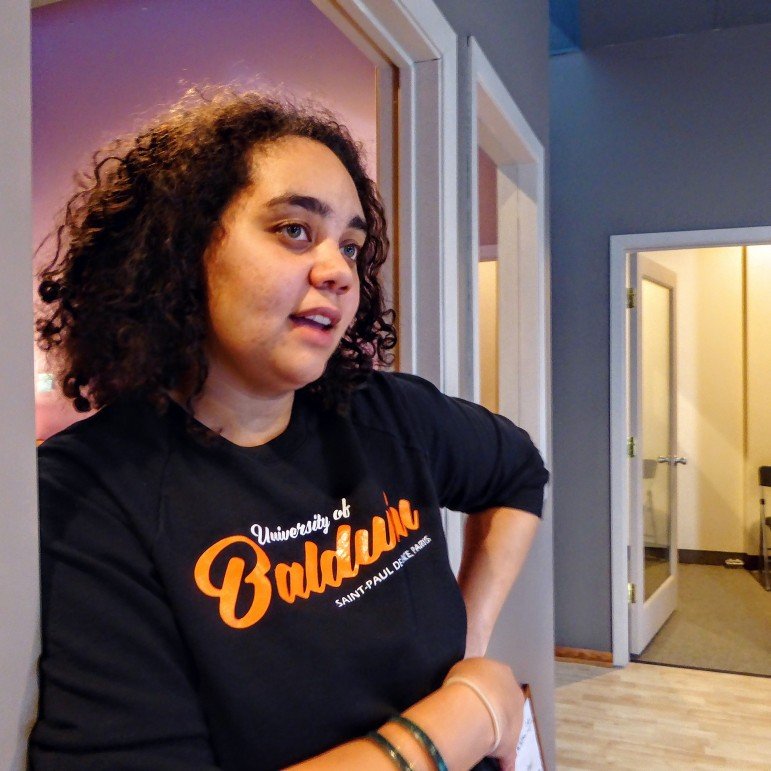 Autumn Brown stands at the threshold of her purple office space. Open doors and easy access are a priority at RECLAIM. Photo by Hannah Jones.

She’s not the only one, according to Bystrom.

“Everybody talks about the RECLAIM magic,” she said. “Things just happen, just in the right way and at the right time.”

Later this winter, Brown hopes they’ll be able to hire the right permanent executive director to keep them going. Her position was never meant to be long-term. But her time at RECLAIM has been a healing journey for her, too, and a chance to be the most authentic version of herself she can be, wherever she is.

“One of the unacknowledged realities is that we cause a lot of harm to each other every day. The predominating philosophy seems to be that you just suck it up,” she said. “But, no: we can shift that. We can tell a different story.”

[Editor’s Note: This article has been modified to correctly state Ilana Sperling’s history with RECLAIM.]