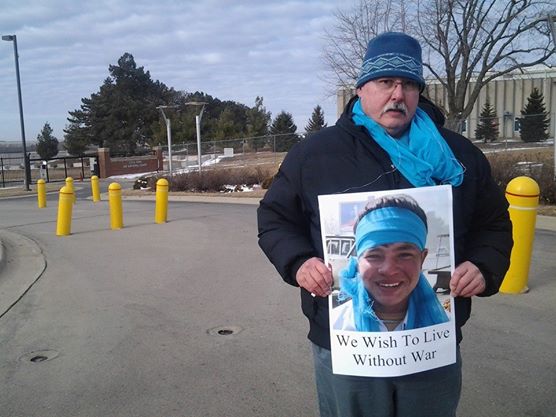 The tears were streaming down my cheeks as I walked towards the shuttered iron gates in front of the Iowa National Guard base in Des Moines. The tears were a combination of reaction to the cold wind in our faces as seven of us walked slowly and deliberately toward the base entrance as well as my emotions remembering the victims at the receiving end of military drones. I carried a large photo of my Afghan friend, Abdulai, with his statement underneath: we wish to live without wars. Now 17, he has only known war or the threats of terror his whole life. When I met him in Kabul in March a few years ago, he showed me pictures of their march in the downtown area of his nation’s capital city where they marched by the Embassy for the United Nations wearing the sky blue scarves calling for an end to war.

I brought one of the blue scarves of the Afghan Peace Volunteers back to the US with me and wore it in solidarity with those courageous peacemakers back in the country where the US drones prowl the skies. My friend, Frank Cordaro, sent me an invitation to join the annual Midwest Catholic Worker Faith and Resistance Retreat which would focus on faith-based nonviolent resistance to drones. Veterans For Peace were co-hosts with the Des Moines Catholic Worker and we learned of the plan-in-progress to bring control of Reaper drones to the local National Guard base in their city. The Reaper and Predator are unmanned aerial vehicles (aka drones) which are armed and rain deadly munitions from the skies which are designed for both “extra-judicial execution” and the sowing of terror on intended (and mistaken) targets.

We engaged in nonviolence training on Sunday afternoon before listening to Kathy Kelly from Chicago-based Voices For Creative Nonviolence (www.vcnv.org) who reported on her recent trip to Afghanistan and her work against drones. Overnight I’m sure many of us wrestled with the uncertainties ahead: would we held in the cold jail until the next morning, would we face state or federal charges – the latter threatening fines of $500 as well as 6 months in prison? The stakes could be significant. I promised my wife I would do my utmost to NOT be in jail when my oldest son returns from West Africa this August for his wedding! But also weighing on me are the stakes and risks for those threatened by Hellfire missiles fired from miles overhead – out of sight and accompanied by the distant “hum” of the drone’s engine.

People always ask, “Is civil disobedience effective?” Am I tilting at windmills when trying to prevent or discourage our nation’s head-long rush into wars ostensibly to prevent terrorism by terrorizing others? Even some of our retired military leaders ( including Stanley McCrystal and former Defense Secretary Robert Gates) recognize that the use of drones which often kill “innocent civilians” serves as a recruiting tool for more “insurgents” – thus reaping the proverbial whirlwind. Before leaving for the peace witness this morning, we gathered at the Catholic Worker House to sing, pray, and gather our thoughts. Ruth, one of my fellow arrestees from the south Minneapolis-based Rye House Community shared with us some writings from Thomas Merton as well as one of my mentors, Dan Berrigan. He wrote that we must act on our conscience and leave the results to God. We heard part of the prayer called the Breastplate of St. Patrick, on this, his feast day, as we piled into car pools for the 15 minute ride to the air base.

The seven of us arrested as we stood arm-in-arm facing the closed iron gate, one from a new Catholic Worker House in Duluth, one from Rye House in Minneapolis, two from the Des Moines Catholic Worker, a leader of the national Veterans For Peace movement, and a 85-year old retired Methodist minister from Des Moines joined me in receiving a “ban and bar letter” from the military base and a court date of March 25 to enter a plea on the state criminal trespass charges. We were treated courteously and professionally by the arresting officers of Des Moines STAR (Special Tactics and Response) unit as we reminded them of our vow of nonviolence we recited before we walked down the driveway this morning. We informed them our protest was directed at the arrival of the drones-mission [sic] rather than at them as we were placed under arrest and placed in a “paddy wagon” – how fitting for St. Patrick’s Day!