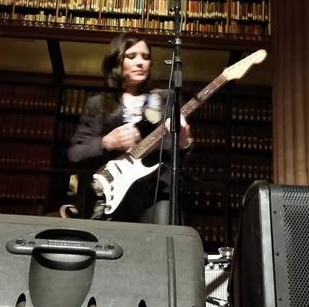 Every third Thursday of the month, my favorite 10 year old and I enjoy music in the reference room of the erudite James J Hill Reference Library and every third Thursday we learn a new chapter of music history from talented musicians who have played with great names in rock and rock, country and veins other musical genres that run through both. In February we learned about Bob Dylan, Bobby Charles and Dr. John from Shannon McNally.

McNally was both the spoken word and headline performance. She read from Bob Dylan’s recent controversial speech at the MusiCares where he called out many musicians for selling out, pandering or at best being risk averse. You could have heard a pin drop as McNally, with her melodious voice and southern accent, read a speech written by and highlighting a man with a whiny, gravelly, Minnesotan sound. It gave gravitas to her interest in deep roots of rock.

By the time she took the stage to sing later in the night, we were predisposed to take her seriously. She didn’t disappoint. She has a strong voice that at times borderlines a yodel, other times aspirated and still others clear as a cold sky – and interesting range. And she had stories – stories in the lyrics but also stories in the introductions, which is where we got some musical history lessons. McNally worked with Bobby Charles and Dr. John on a remake of a Charles release from 1972; in fact it was her idea. With that history she brings her in own sound with songs like Geronimo and the story of how it salvaged an otherwise disastrous tour. Her guitar playing is old school, stand back, take no prisoners, rock and roll!

Red Planet, a trio of Chris Bates, Dean McGraw and Jay Epstein, played jazz. The set started with the upright bass solo until the guitar slid in behind joined eventually by the drums. There were deep low bas strumming and cymbals drumming and the guitar leading the way. Although it seems as if each instrument took a turn walking around the stage while the others served as tourist attractions. I always think there’s a sense with jazz that the object of the game is to stay just on the good side of cacophony – and they did.

Starting and ending the night was Erik Koskinen and the Real Phonic Band (Paul Bergen, Frankie Lee, and Noah Levy and guest drummer). They played a lot of early stuff such as Learning the Hard Way, but played with a layered depth that’s a little different that the recorded version and a version of Feel My Love, which we learned was written on the stage of the Hill Library during a sound check. Almost like history in the making!