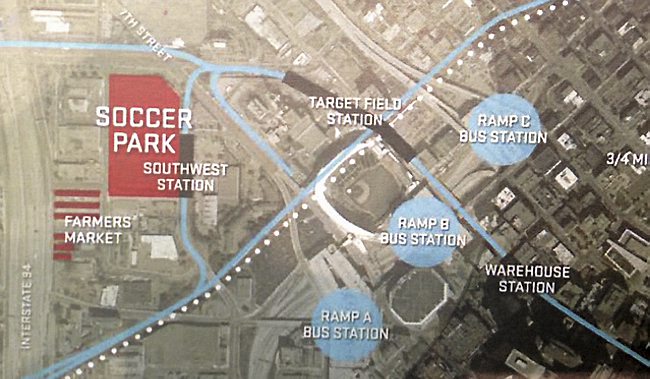 The question, “Should I have just one more drink?” can be the difference between actually showing up to the sloppily made brunch plans from the night before and quivering in a bed wet with balmy sweat while clutching a fistful of aspirin.

This mistake gets made once or twice in your life before you learn to shy away from the tempting words of “just one more.”

However, after Wednesday’s announcement of a new Major League Soccer expansion, the city of Minneapolis currently faces its own “should I have just one more” debate. But instead of Grain Belt beer, Minneapolis needs to ask itself whether it needs “just one more stadium.”

The MLS awarded Bill McGuire, the former UnitedHealth Group CEO and current owner of the Minnesota United FC, the opportunity to start a new MLS franchise under the stipulation that he commit to building a new outdoor stadium — which would be the fifth large-scale professional stadium in the Twin Cities area.

Of all the cities in the United States that have five major professional sports teams, Minneapolis is one of the smallest. I’m a small guy, and consuming five drinks is a lot for me. So what does that say for the Twin Cities’ fifth professional stadium?

McGuire estimates that a proposed 18,500-seat stadium would cost about $150 million to build, but he kept mum when asked whether he would seek public money for its construction. That’s a bargain of a price when you glance at the new Vikings stadium ($1 billion), but let’s not forget that we’re still paying off the debt for Target Field. Last month, moreover, Target Center asked the Minneapolis City Council for almost $25 million for repairs.

In an effort to seek private funding for the team and stadium, McGuire assembled a Justice League of Minneapolis sports owners — including Glen Taylor of the Timberwolves and the Pohlad family, which owns the Twins — as partners in the new franchise. But even with all their monetary powers combined, it may be necessary to seek additional public assistance.

Unfortunately for McGuire, this is not the right time to pitch a new stadium to the Twin Cites. While the state has a massive budget surplus, statewide projects like universal pre-K and college tuition freezes should get priority over bolstering a single city’s stadium collection. McGuire’s promises of new jobs and a renovation for the nearby farmers market aren’t enough to persuade me that now is the right time for another stadium.

Unrelated to questions over dollars and cents, the fact remains that soccer is currently the world’s favorite sport. For a city that recently gained notoriety for its income gap and racial disparities, an outdoor bowl-shaped soccer stadium might be the cultural mixing pot that Minneapolis needs to mend the divide.

But the sugar-coating of a cultural mixer should not be the driving factor that leads the city to a fiscal hangover from having one too many stadiums.