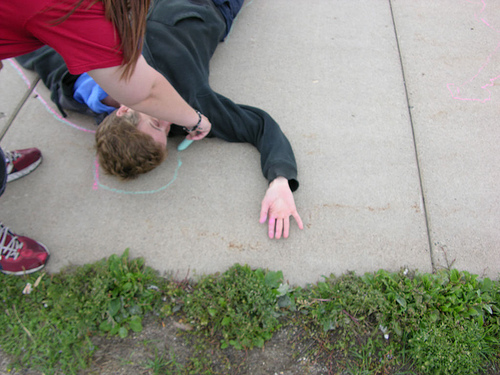 A game, a scavenger hunt, a history lesson, an expression of solidarity, street theater, and disruption (All photos by Alan Wilfahrt)

To commemorate the anniversary of last year’s RNC protests, a group of activists staged “present day interventions and public interactions” in the context of a big-urban-game which took place throughout St. Paul on Saturday.

Text by Sheila Regan, photos and captions by Alan Wilfahrt Kit bag with supplies: Each team received a back pack with supplies and numbered envelopes to be opened after text messages were exchanged indicating specific criteria were met.

The game, Re:Activism was designed by Prototyping, Evaluation, Teaching and Learning (PET) LAB (http://cdtproto.parsons.edu/cdt_new/petlab.dev/node/4), a joint project of Games for Change (http://www.gamesforchange.org/newindex)  and Parsons The New School for Design (http://www.parsons.newschool.edu/) in New York City.  According to PETLAB’s website, its mission is to create “a place for testing prototyping methods and the process of collaborative design with organizations interested in using games as a form of public interest engagement.” Challenges in envelope for designated site: Clues were given for each site located on the map, keys were obtained at the site from those clues, text messaging the key back to Central, the next numbered envelope was text messaged back, the envelope had challenges, completion of the two (optional) challenges resulted in points being awarded

Re:Activism, which premiered last year at the Come Out and Play Festival in New York City, works by having the participants complete challenges by using activist tactics to score points.  Following the game’s premier, PETLab has created kits for activists in other cities to download and try out. Team plans: The teams’ strategic decisions on the route set them of on their paths.

Nikki Schultz, one of one of the three activists responsible for organizing Re:Activism Twin Cities (http://reactivismtc.tumblr.com/), said she heard about the game from a friend of hers who was involved in the original New York version.  Schultz said PETLAB was helpful in providing templates to use as a blueprint, and were excited about another city taking the idea of the game and personalizing it in a specific context.  Schultz and two other local organizers, who asked to remain anonymous, were looking for “a way to commemorate what happened in St. Paul last year in a more fun and positive way,” Schultz said. Text messaging when keys on site are detected: Communication with Central via text messaging.

The 15 game participants met up at Black Dog Café, and divided up into teams.  Each team was given a backpack which contained instructions about where to find the locations where their activities were to be performed.  Once they reached each location, and verified via text message that they were in the right place, they opened the appropriate envelope and performed actions that harkened to a historical activist event. Text message back indicated envelope to open to read the challenges. Locations included sites that were significant during the RNC but also had historical significance as well. Historical information and comments at each mapped site offered background for the challenges, the site challenges were in numbered envelopes which were texted back to the teams after they had successfully detected the key given on the clue sheet.

“It was important to us to further contextualize the struggle,” Schultz said.  For example, one of the sites, the Marion Street Bridge, was the place of 400 arrests last year during the RNC, but also covers I94, which “ripped apart the African-American Community in Rondo,” Schultz said. A challenge, a purpose: Support the RNC 8

Another location, The Minnesota History Center, became a stage for a die-in, where participants created outlines in chalk, and created theatrical presentations about the history of the Dakota land struggle. A comment: They’re not rights if you have to ask permission to use them. A critique: The RNC in 2008 confined Free Speech, one of many illegal acts perpetrated by both of the major political parties in the name of security. Securing our constitutional rights needs constant vigilance.

The Re-Activism Twin Cities blog (http://reactivismtc.tumblr.com/) states that the point of the re-enactments is to “draw parallels between struggles, to unearth moments of local radical history, and to theatrically subvert business-as-usual." A memorial: A protest of the negligence of animal rights 1st Amendment: Congress shall make no law respecting an establishment of religion, or prohibiting the free exercise thereof; or abridging the freedom of speech, or of the press; or the right of the people peaceably to assemble, and to petition the Government for a redress of grievances. Schultz, who studied theatre at the University of Minnesota, said that theatre and activism merge very naturally.  “Protest is an act of public interruption and disruption of public space and so I think it inherently is really quite theatrical in nature,” Schultz said.  “When it’s most exciting, is when people are having a really good time, when they’re not afraid to speak up and their using media available to them to get their message across.” Following the day’s events, the participants met back up at Black Dog Café, where they concluded that two of the teams had tied.  The prize for winning was a vegan chocolate cake, and the winner decided to share it with everyone.