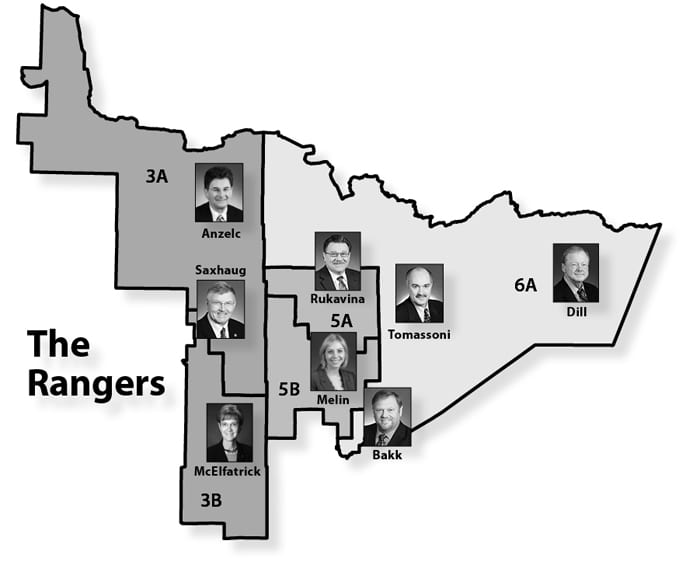 No one can accuse Rep. Tom Rukavina (DFL-Virginia) of going down without a fight. When a proposal was made to strip $60 million out of an Iron Range trust fund to help balance the state’s budget, he resisted it every step of the way.

“This is an outright theft of money from people that don’t deserve this,” he told members of the House Ways and Means Committee on March 28. He demanded to know whose idea the fund transfer was. “Who’s the moochers here?” he snapped.

Two days later, Rukavina pressed his case in the House Taxes Committee, again to no avail. When the offending bill was finally brought up for a floor vote April 5, he made sure to let everyone know just who they were taking money from.

“We’re proud people,” he began. “I’m proud. I’m so proud to be a ranger, every time I turn that corner in Midway, that little suburb of Virginia … and see those big pits kickin’ out that ore, I am proud to be who I am.”

The Iron Range delegation, as the eight state lawmakers from Minnesota’s mining region are collectively known, are a unique and indelible fixture at the Capitol. Known for their fierce independent streak and their loyalty to each other – and in some cases, their distinct northern Minnesota accents – the group has earned a distinguished reputation at the Capitol.

“The range has got a lot of colorful people there – very colorful legislators,” said Rep. Bob Gunther (R-Fairmont).

It was Gunther who sponsored the controversial $60 million fund transfer (included in the omnibus jobs and economic development finance bill); it was he who had to bear the brunt of the rangers’ fury. In spite of the friction this has caused, he said he counts many rangers, both past and present, as close personal friends. He also said the fund transfer wasn’t his idea.

With its deep roots in the labor movement, the Iron Range is a major power base for the DFL, and the rangers’ emphatically pro-union politics rankle many Republicans. At the same time, rangers are also known for their libertarian streak, and aren’t afraid to break with their own party on key issues. All this would seem to put them at odds with colleagues from both parties, but the group’s spirited personalities have earned them friends on both sides of the aisle.

“My experience here in 25 years is, people hate to love us, but they do,” Rukavina said.

Holes in the earth

The history of the Iron Range is inseparable from the history of mining. Not only does the industry anchor the region’s economy; it has had a defining impact on the culture and politics of the people there.

Geographically, the Iron Range consists of a 100-mile wide swath of mineral-rich land in the northeast corner of the state. The people who live there largely descend from the working-class families who immigrated from all over Europe to help mine iron ore beginning in the late 19th century.

Mining is difficult, dirty, dangerous work, and as the miners fought to make their work conditions better and their communities more livable, they became a focal point of the labor movement. While they struggled for their rights as workers, they also played a pivotal role in U.S. history. Between 1900 and 1980, the range produced about 60 percent of the nation’s total iron output. The steel that was made from Minnesota’s iron ore built skyscrapers and battleships, and was a key component of American industrial and military power. 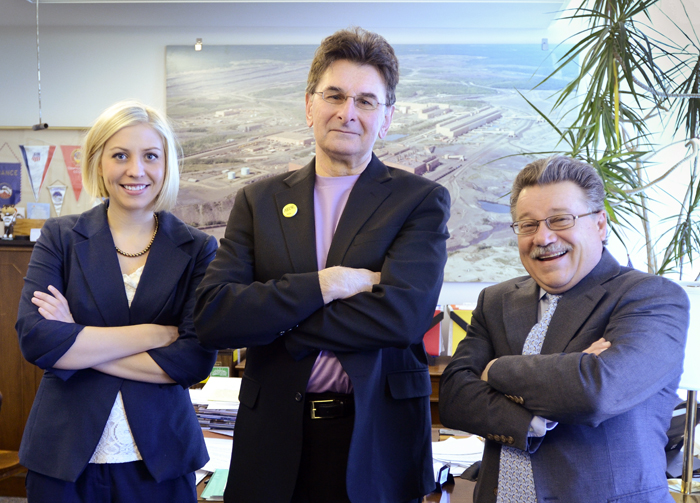 “The history of the range is really magnificent,” said Rep. Carolyn McElfatrick (R-Deer River), the delegation’s lone Republican. “I have a tremendous respect for what the Iron Range has done – not just for our people there, but for our country.”

Today, many on the range seek a more diversified economy, and there has been some success toward that end. Companies like Delta Dental, Blue Cross Blue Shield of Minnesota and Delta Airlines now employ hundreds of residents. But Rep. Tom Anzelc (DFL-Balsam Township) believes the area’s abundant natural resources will always be its lifeblood.

“We dig holes in the earth to extract minerals; we cut trees to make toilet paper and two-by-fours; and we’ve got those beautiful lakes and forests,” Anzelc said.

Because of the uniqueness of their economy within the state, range lawmakers tend to vote together on issues of significance to their region. As Rukavina puts it, “We fight together down here. We don’t always agree, but we don’t disagree publicly.”

The proposed $60 million transfer from the Douglas J. Johnson Economic Protection Trust Fund is a prime example. The fund, which is paid for through a production tax on mining, is used to fund economic development projects on the range. The goal is to help smooth out the boom-and-bust cycle of mining by promoting a diversified economy.

“Right now we’re lucky enough that our taconite mines are at full production. In 2009, they were all shut down, and there was 3,600 people out of work,” said Rep. Carly Melin (DFL-Hibbing). Like the other rangers, she believes the Douglas Johnson fund is needed “so we have some room to fall back on when we’re not at full production.”

At the age of 25, Melin represents a new generation of Iron Rangers. But like those who came before her, she’s ready to take up the cause of the range and its people.

“There’s no other area in the state of Minnesota that has an economy like we do, and that relies on the minerals and resources like we do. … That’s why we stick together down here,” Melin said.

On the floor and in committee, the older rangers have taken to referencing “Rep. Melin’s generation.” They see Melin as not just the newest and youngest member of the group, but as the beginning of a new chapter in the range’s history.

“She definitely is gonna be the future of the range,” Rukavina said. “Hopefully as us old timers get old, we’ll get replaced by the same quality people.”

Melin replaced former Rep. Tony Sertich, whom Gov. Mark Dayton appointed to serve as commissioner of the Iron Range Resources and Rehabilitation Board. But the other new member of the delegation, McElfatrick, arrived somewhat unexpectedly, having defeated 14-term veteran Rep. Loren Solberg.

Though her priorities fall mostly in line with those of other Republicans, McElfatrick voted “no” with the other Iron Rangers on the transfer from the Douglas Johnson fund. It was a hard decision, but she said she agrees with the DFL rangers that the fund is important for the region’s future.

McElfatrick said the last election shows that people on the range are eager for some change, but only time will tell if the conservative shift will stick. Either way, she said the DFL rangers have welcomed her to the group with open arms.

“They have been very gracious to me, and I appreciate that, because I am a little bit out of the mold,” McElfatrick said.