Four candidates are running for Ramsey County commissioner in the area that includes Arden Hills, Gem Lake, North Oaks, Shoreview, Vadnais Heights, White Bear Township and parts of Mounds View, Spring Lake Park and Blaine. The top two candidates by votes will continue in this non-partisan race that ignores party. All four candidates have a credible claim with no certainty as to who are the top candidates.

The incumbent is Tony Bennett, a four term Republican incumbent who also served as a legislator, a police officer and a US Marshal. Since 1996, he has been a county commissioner. This last year, Tony became the champion of redeveloping a large polluted site in Arden Hills by making it the new site of Vikings Stadium. Subsidizing a Viking Stadium churns up strong feelings, both pro and con. However, championing a job-making project in this tough economy earned Tony the support and endorsement of MN Teamsters, AFL-CIO and AFSCME. It is strange to have labor out door knocking for a Republican. In an unusual move, the Pioneer Press decided to endorse Tony in the primary. Strangely, an unrelated project of a badly-managed sports stadium in Vadnais Heights may have stroked the the anti-stadium sentiment. All three opponents have come out opposed to the stadium, which means that Tony retains all the pro-stadium voters.

Now the Republican party does not endorse in non-partisan races. However there is a preferred candidate status that allows a candidate to access the phone lists of the Republican party. Blake Huffman gained the preferred candidate status. Blake serves as a Well Fargo Vice President and been on Shoreview’s city council for 16 years. His huge message is anti-stadium, paraphrased as “Who could spend 700 000 – 1 million dollars on stadium when we don’t have the money for core services? ” He has been aggressively campaigning and is perceived as a contender. Blake said in a phone call that he had done 25,000 lit pieces, comprehensively called primary voters and hit every door. Blake claims to have cross-over Democratic support. Effectively Blake and Tony split the Republican vote.

Frank Mabley is the DFL endorsed candidate, Frank worked in NASA and now works as a lawyer. His answers to questions have that detailed technical feel. He is the only candidate who actively deals with issues of pollution that underlie the Arden Hills site. I have heard that people in Arden Hills tend to drink bottled water instead of local water. I don’t know if that was a joke. While DFL candidates struggle to get a majority vote in the area, there should be enough DFL support to get one of the top two spots.

And that leaves the infamous candidate number four, St Paul Commander Bob Fletcher, previously the sheriff before being unelected out of office.

With Tony and Blake splitting the Republican vote, does that leave room for Fletcher to slip in? I think most of Fletcher’s votes in the past were based on incumbent status and name recognition. Primaries only attract the most dedicated of politically invested people who are likely to know of Bob Fletcher’s poor record.

Bob Fletcher seems to be throwing the Tea Party types a bone with promising to cut commissioner salaries by 20%. Bob Fletcher is most known for going over budget and then suing the county to continue to go over budget at will. So the “fiscal restraint” claim is rather hilarious. Especially since out of all the candidates, Bob is promising to do the most additional spending.

7. Should county government be actively involved in attracting and retaining jobs? Why or why not? If yes, please describe the role for the county in this process.

While I like this idea, this is still very expensive:

In Fletcher’s responses to the League of Women Voters, Fletcher lists multiple items that require spending.

In personal finance, documented by the Pioneer Press, Fletcher had a house financed for $591,602 which the bank allowed him to turn over for deed instead of foreclosure. Fletcher did not keep up payments even though he was earning $106,593 as a police commander and his wife has real estate business.

One would expect that police commander would always follow the law and the rules. To do otherwise would be a huge impairment in testifying in court cases. Yet the Bob Fletcher campaign has been known to install an illegal sign four times in the same location.

I am told that along Hwy 96, from Hodgson to County Road J and County Road E that you will find illegal signs. For example, this house is empty and just recently sold: 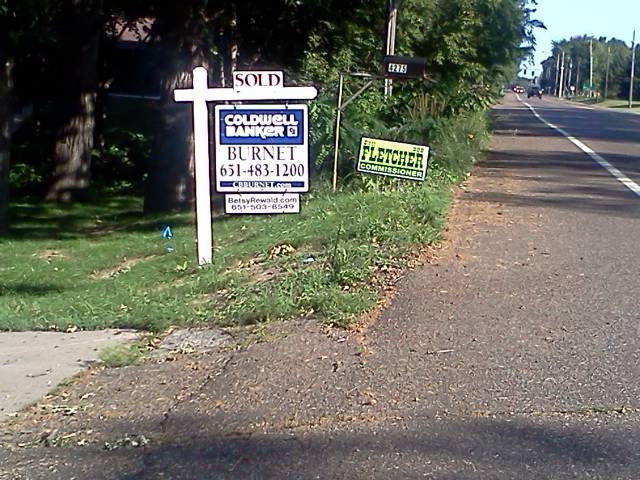 But that is just the recent news. Examining Bob’s history in other offices demonstrates that he should not be trusted with any office.

Tuesday’s primary race for Ramsey county commissioner for district 1 is definitely the race to watch.