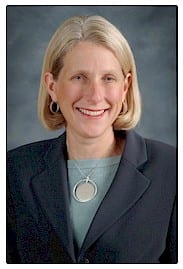 It’s been a year since the Republican National Convention descended on St. Paul, bringing with it hordes of protesters and police whose clashes erupted into several incidents still working their way through the courts.

From criminal charges filed against activists arrested before the RNC to civil suits seeking damages for excessive police force, and a variety of circumstances in between, a log-jammed legal system is still working toward justice in many RNC-related cases. As far as what, exactly, justice means in these cases – that all depends on who you ask.

At the center of the criminal cases is the Ramsey County Attorney, Susan Gaertner. Her office is responsible for prosecuting criminal cases stemming from the RNC, and as the top official there, she’s emerged as a sort of figurehead in some activists’ crusade against what they call overbearing authorities determined to stifle dissent.

Perhaps the best-publicized case set to go to trial is that of the RNC 8, eight activists who were arrested preemptively before the convention and ultimately charged with four felonies each: conspiracy to riot, conspiracy to commit damage to property, and both those charges with an added “in furtherance of terrorism” enhancement. Gaertner’s office added the controversial terrorism charges, which she has said follow the letter of the law according to Minnesota’s version of the PATRIOT Act, but lifted them earlier this year.

She has conceded in past interviews that the much-scrutinized PATRIOT Act likely wasn’t meant to apply to cases like the RNC 8.

Gaertner, a DFL candidate for governor, came under fire from activists nationwide, as well as some local DFLers, for tacking on the terrorism charges. A thousands-strong labor union in Duluth drafted a resolution opposing the charges and Gaertner.

Other cases have been resolved, some not in protesters’ favor. Of 22 felony cases charged by Gaertner’s office (from the total of more than 800 arrests), six defendants have pleaded guilty, two have been found guilty and prosecutors have dismissed three cases. Eleven cases have trials pending, including the RNC 8, who are still threatened with jail time.

“The cases that have been resolved have served to reinforce my impression that a number of people that face charges and that they were legitimate charges to bring,” Gaertner said. “It reinforced that the charges were not about criminalizing dissent, they were about prosecuting criminal acts.”

In her St. Paul office, which overlooks the site of one RNC mass arrest near the river, Gaertner sits poised and ready to do her job, to finish the work that began even before the convention smashed into St. Paul, leaving an indelible blemish on the city. For her part, Gaertner will continue to lead her office’s prosecutors as they wade through the remaining RNC cases, remembering with little fondness the four days that rocked her hometown.

“It’s what I was elected to do,” she said. “I’m certainly not going to complain about what my role is in dealing with the aftermath. That’s part of my official duties.”

A year later, Gaertner speaks with disdain about her own RNC experience. On the first day, she walked through St. Paul.

“When I looked to the right, I could see masked individuals running around, breaking things, creating fear,” she said. “To my left I could see the National Guard in line in riot gear on a St. Paul street. And I literally burst into tears.”

The St. Paul native said she was shaken by what she saw, from protesters and police alike, and the memory still sits with her.

From the time she first heard the Twin Cities would host the RNC, Gaertner wasn’t enthusiastic about the arrangement.

“There’s nothing about having the Republican National Convention in St. Paul that I remember with any fondness,” she said. “When I heard that it was coming, I certainly wasn’t pleased. I anticipated demand on my office and demand on community good will.”

What she didn’t anticipate, she said, were the major flare-ups between police and protesters that left hundreds arrested through the four-day event, property damage brought on by street protests and the implication that she’s part of a government intent on suppressing dissent.

“That is so not fair,” she said, referring to the suggestion, widespread in some circles, that officials aimed to quash anti-authoritarian views. “The police had a very difficult job. Their job was to balance public safety and the protesters’ right to express dissent. From the outside looking in, or in hindsight, it’s very easy to criticize individual decisions that were made but I don’t think that that is fair. They had a very, very tough job.”

If the RNC were to happen all over again, if Gaertner would have to deal with another RNC all over again, she said she would hope for a less contentious atmosphere. Looking back, on the parts of both the activists and law enforcement, Gaertner said, a more peaceful and level-headed approach could save those involved headaches and heartache.

Karlee Weinmann (karleeweinmann@gmail.com) is a freelance journalist who lives and works in Twin Cities.