“I think I’ve done a really good job,” Choi says of his four years as City Attorney. “You never want to get overconfident, but I have a proven track record as both a prosecutor and an administrator that I’m proud of.”

Schultz, a former Assistant Attorney General under Skip Humphrey says his 25-year record as a trial lawyer and experience prosecuting and defending cases involving serious felonies sets him apart from his competition, despite also being a first-time candidate.

“People are tired of politics as usual, and they don’t want someone using the Ramsey County Attorney’s office as a stepping stone for higher office,” Schultz said. “My only concern is the people of Ramsey County, and I’m not going to run for any other office down the road.”

Schultz picked up Pust’s endorsement following her elimination in the primary, but nobody has received Gaertner’s endorsement in the race.

The winner will lead an office with a budget of $38 million and more than 300 employees responsible for prosecuting adult felony and all juvenile criminal cases in St. Paul and the other communities of Ramsey County, as well as representing the county in civil matters, advising its board of commissioners, enforcing child support, and overseeing civil commitments, restitution and other victim services and child protection.

Choi, whose family immigrated to the United States from South Korea when he was three years old,  emphasizes his four years as City Attorney under St. Paul Mayor Chris Coleman, and the results he said he’s achieved during that time.

“I believe I’ve transformed a public law agency, increased morale and achieved better result for the public, as told by third-party observers,” he said. “From my fellow city attorneys I received the Joseph Mulligan Award in 2009 for top municipal attorney in public leadership for all of North America.”

Choi points to his efforts last year to secure injunctions against known gang leaders to ban them from wearing gang colors or associating with each other at St. Paul’s Rondo Days and Cinco de Mayo celebrations.

Under his leadership, the City Attorney’s office has reduced its response time to investigating domestic violence reports from 30 days to a week or less, Choi said.

He also said the city implemented new criminal diversion programs aimed at reducing recidivism and allowing people to keep their drivers licenses instead of having them revoked, which can have negative economic consequences.

In his most high-profile criminal action while City Attorney, Choi’s office sorted through 672 potential prosecutions from arrests made at the Republican National Convention in 2008. His office dismissed 80 percent of those cases and has secured nine convictions on misdemeanor charges including vandalism, criminal damage to property and unlawful assembly.

“We tried to get those cases sorted out as quickly as possible,” Choi said.

If elected, Choi said he has the track record to be able to make incremental reforms to the County Attorney’s office during a period of tight budgets and potential cutbacks.

Using technology, alternate sentencing and restorative justice to reduce repeat offenders and save on court costs, emphasizing juvenile crime prevention and coordinating with local city attorneys on issues such as domestic violence are some of the places Choi said he would emphasize if elected.

“My focus is 110 percent on serving the people of Ramsey County,” he said. “Some of the things I want to do, I don’t believe it’s possible to get the job done in four years.” 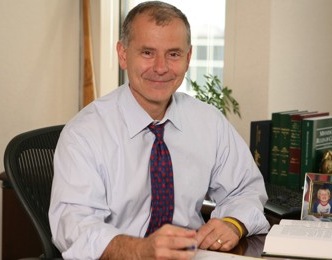 While Choi argues that he has the experience as an administrator in public law, Schultz said his legal career makes him the solid choice for County Attorney.

That career spans the globe and 25 years and includes prosecutions while working in the Minnesota Attorney General’s office, defense cases including arguments in federal court and the Minnesota Supreme Court, and work helping Kosovo set up its legal structure and reversing a Kenyan court’s wrongful declaration of the 1998 death of Minnesota priest the Rev. John Kaiser as a suicide.

“What I bring is 25 years of professionalism in the legal field,” he said. “My County Attorney’s office will be staffed with professionals, too, because I need lawyers, not political advisers.”

Schultz takes aim at Choi’s handling of the 2008 RNC arrests, saying he would have met with stakeholders before the convention to minimize conflicts and kept his office open throughout the convention to process arrests more quickly and prevent people from being held overnight and weekends.

“Everybody now admits there were people who were charged who should not have been charged,” Schultz said. “To say that there was enough evidence to charge someone, just not to go to trial, doesn’t make any sense.”

He said he thinks Gaertner did a good job as County Attorney, but would look to seek enhanced penalties for crimes committed using firearms, move away from civil commitments on sexual predators and seek longer sentences for them, and create a strike force dedicated to prosecuting crimes against senior citizens.

Schultz said his experience managing a private law firm matches the size and budget of the Ramsey County Attorney’s office.

Heading into the general election, Schultz said he believes increased turnout from Republicans and independents, plus Pust’s endorsement, will help him overtake Choi, despite his significant primary win.

“It’s just a matter of getting out and communicating my experience to people,” he said. “When I tell people about my background and qualifications and reasons for running, I get a fabulous response.”