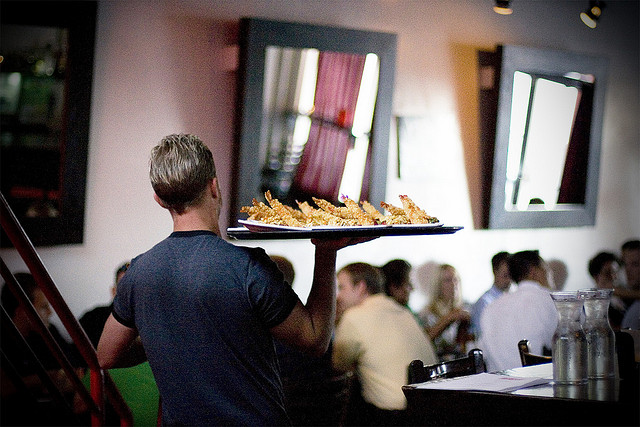 In last night’s State of the Union address, President Obama called for the federal minimum wage to be raised to $9 an hour and linked hereafter to the cost of living, so that it will rise along with inflation. He pointed out that a couple with two children working full time at the current minimum wage are still living below the poverty line. If Congress responds to this call, it will be a step in the right direction for building a just food system in America. Workers in fields, food processing plants, restaurants and supermarkets are among the lowest paid in the country. A higher minimum wage would be an important step toward ensuring that the people who feed our society can also feed their own families.

But it’s not enough. We also need comprehensive immigration reform, and stronger protections for the rights of farm workers. We need paid sick leave, so that food workers aren’t forced to endanger their health and ours when they become ill. And we need more effective enforcement of existing laws, so that workers in the food system are no longer routinely subject to wage theft and sexual harassment.

As a matter of fact, a higher minimum wage by itself will be of limited help to some of the lowest-paid Americans: the restaurant workers whose wages come partly in the form of tips. This issue is one that many people aren’t aware of, but if you think the regular minimum wage of $7.25 an hour is inadequate, the “tipped minimum wage” is a mere $2.13! It has been at this level since 1991, when the non-tipped minimum wage was $4.25. And while there may be some folks at high end bistros who do very well on tips, waitstaff overall have three times the poverty rate of other workers.

Fortunately, after two decades of neglect, the cause of raising the tipped minimum wage has champions both in the streets and in Congress. Restaurant Opportunities Center United (ROC United) is a worker organization that has been fighting for the rights of restaurant workers since 2002. They use direct action at individual restaurants, campaign against large chains like Darden (owners of Red Lobster and Olive Garden) and legislative initiatives to fight against wage theft, and promote fair wages and paid sick leave. They reach out to restaurateurs who treat their workers fairly, through a program they call the High Road. And they have even developed an eater’s guide that reports on the labor practices of prominent national restaurants and chains. Today, ROC United co-founder Saru Jarumayan released her new book, Behind the Kitchen Door, which makes their case for justice for restaurant workers. IATP has been working with ROC United to raise awareness within the Food Movement about worker justice issues, so I was able to get an advance copy of her book, and it is brilliant, devastating, and inspiring. (No, I didn’t hyperlink to Amazon.com: buy it from your local independent bookstore!)

In Congress, Rep. Donna Edwards (D-MD) has pushed for increases in tipped minimum wage since 2009, and last year, Reps. George Miller (D-CA) and Tom Harkin (D-IA) introduced the Fair Minimum Wage Act, which would phase in over three years a minimum wage of $9.80, and mandate that the tipped minimum wage should always be set at 70% of the minimum wage level. The National Restaurant Association and its intellectual minions have attacked these bills as costly job-killers, but a study by the University of California and the Food Chain Workers Alliance found that Miller-Harkin would have negligible impacts on food prices.

Edwards reintroduced her bill, the WAGES Act, this morning. To voice your support for a fairer wage for food workers, go here.

The announcement of the WAGES Act and the release of Behind the Kitchen Door were both timed to fall on February 13, since $2.13 is the wage level that needs to change, but thanks to the President’s speech, perhaps the date will prove to be doubly auspicious!