It is a rainy, windy Sunday morning—a perfect time to stay inside and write, I thought. The challenge is what to write that you want to read. It’s been a busy week for me. I spent lots of time with my grandchildren while my daughter was away at a conference. I forget that when you are with kids they are your clock and your planner. Their world is very small and revolves around them. They have needs and rely completely on the adults in their world to meet those needs and to give them good choices to make.

In contrast, I have a day today where I can make all of my own choices. The freedoms I have found in this stage of my life make me feel that I have very little self-discipline. I know there are things that need to be done, but I find it hard to choose to spend my time cleaning the house, cooking, or doing paperwork. I would rather catch up on my favorite TV shows, read, or nap. At times I worry about this, but as I talk to my peers I find this is not unusual. We all feel we have earned the luxury of having leisurely days—but who is making dinner tonight?

Today is also the first day of spring. The grass at Target Field was uncovered and has already been mowed this week. Even if there is still snow on the ground on April 8, the field will be ready for baseball. I am not as convinced that the fans will be ready for outdoor baseball on April 8. We were so incredibly spoiled last year. It really was an amazing first year for outdoor baseball at Target Field. Opening day was incredibly warm and sunny.  Above is a photo of my daughters, my son-in-law, and my grandchildren at a game in May. There was only one game cancellation all year because of the weather. Ironically, the Vikings actually lost two games in the Dome to the weather in their 2010 season.  With the roof collapse you have to wonder where the Twins would be playing this season if they were still in the Dome.  At Target Field, fans were so excited to be outdoors that they were actually cheering on the rain—and the accompanying rainbows. 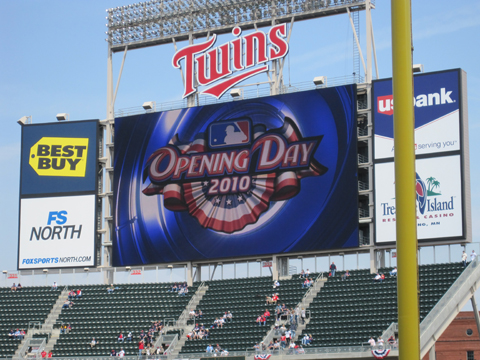 All of the excitement will be there again this year because Target Field is an incredible place to play and watch baseball. The Twins have added a few things this year: a second scoreboard visible from the left field seats, a 100-foot-tall LED-illuminated tower, and more radiant heaters.   These changes were made to what was already America’s best stadium experience, according to ESPN Magazine.

The Twins had a good week at spring training, with a 5-2 record. Justin Morneau played in several games and seems to be doing fine. The big news, though, this week is the fact that Joe Mauer actually caught in a game for the first time this season. There has been much concern about Mauer’s knee after some surgery this winter.

Jim Souhan has made some good points about spring training this year. In particular, he talks about the fact that spring training is really about getting the pitchers ready, making the fans happy, and making money for the teams. It really is not necessary for the position players to spend that much time refining their game and getting ready for the season. Baseball players now spend the off-season working out and come into spring training ready to play. The issue with Mauer last year was that by September he was really worn out physically. Souhan’s point is that Mauer should not be spending time in March catching bullpen sessions and spring training games. If he takes it easy in March he will be able to go into September in better shape than last year. Remember that two years ago Mauer was out until May and went on to win the MVP award and the batting title.

I have been watching the Ken Burns Baseball series and have learned some interesting facts. For instance, did you know that the Brooklyn Dodgers were named after the fact that the fans had to dodge the trolleys to get to the stadium? Or that the first stolen base was in 1863, by Ned Cuthbert of the Philadelphia Keystones? When the other team complained, Cuthbert pointed out that there was no rule against it. The crowds loved it then and still do now.

Hope you find a little quiet time for yourselves this week. It really is quite wonderful. And if you aren’t at that place right now, remember those days will come.