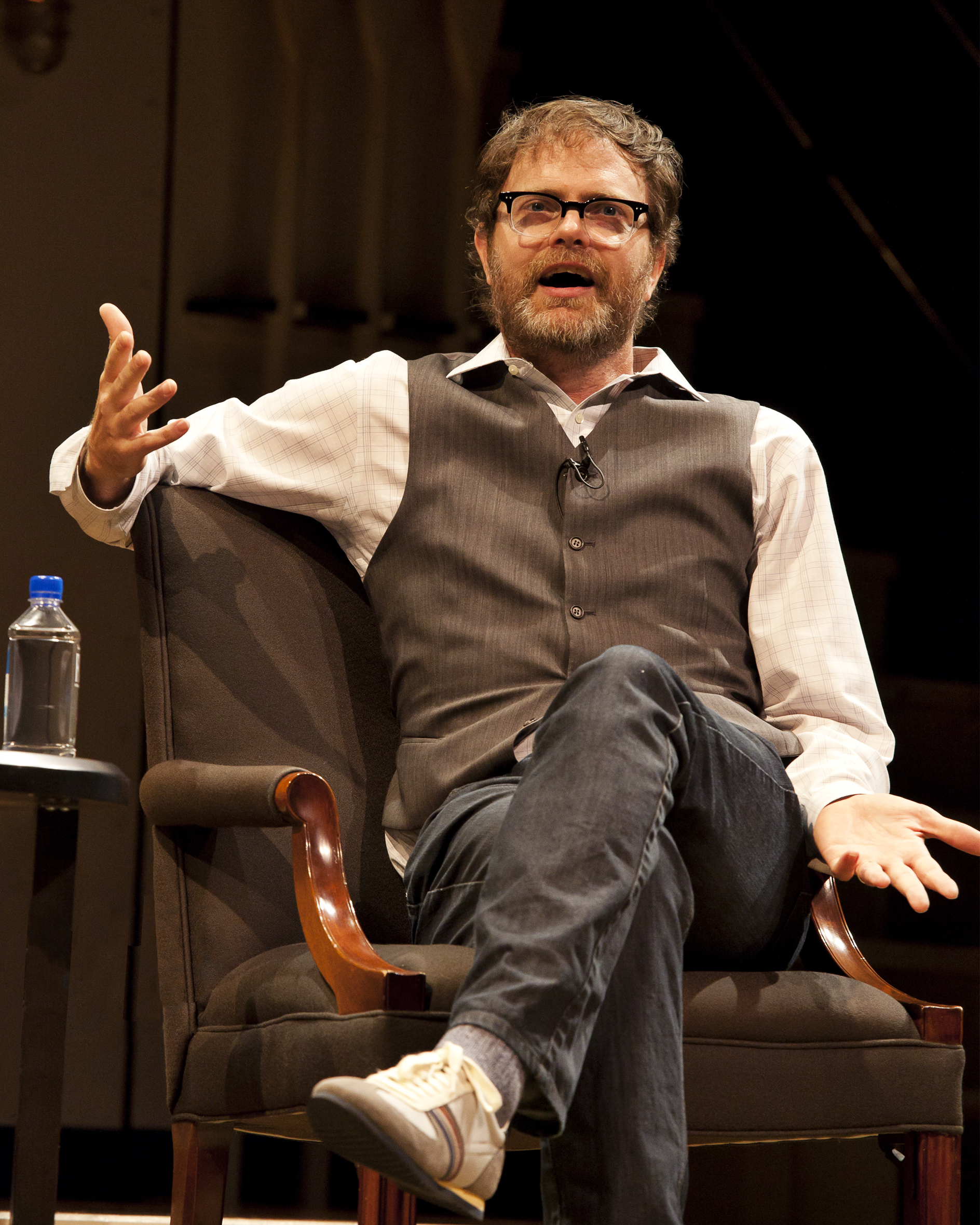 Rainn Wilson appeared relaxed and happy to be back at the Guthrie Theater for an “In Conversation” discussion with artistic director Joe Dowling on July 17. The intimate setting of Guthrie’s Wurtele Thrust stage helped make Wilson and Dowling’s matinee chat seem like sitting in their living room.

Wilson’s ongoing exchanges and jokes with audience members made the one-time Guthrie actor warm and friendly. He resembled a hometown boy-done-good and the audience was thrilled he was back home for awhile. Wilson acknowledged cousins from Stillwater and his wife Holiday Reinhorn, sitting proudly in the theater.

Wilson had a good time rearranging audience members. He took a group of six in obscure seating and found them better house seats. He helped a woman out of her side seating section, up over the stage, and into the front row.

“In addition to a terrific actor, you are a terrific stage manager,” said Dowling. “Is there anything else you would like to rearrange?” Wilson turned around and stared at the gigantic ship H.M.S. Pinafore, placed directly behind him for a current production, complete with giant cannons.

From the beginning, Wilson had the adoration and attention of his audience. He talked about his early years as a struggling New York actor, with a fresh Master of Fine Arts degree from New York University’s Tisch School of the Arts, where he played Hamlet for three years.

He became a member of the Acting Company, traveling the country performing theater. “We went to cities where people literally had never seen a play before. If they had seen a play in high school, they’d never seen Shakespeare. I started at the bottom of the barrel. I was ‘Peter,’ a nurse’s assistant, in Romeo and Juliet, for one-and-a-half years. I’d love another crack at that role.”

Wilson, 45, said those were lean years—graduating from college deeply in debt and having no agent. “I never made over $20,000 a year in those ten years in theater. My wife and I, we were poor, but we were really unhappy, too.”

One of Wilson’s jobs in New York City was starting a moving company he named “Man with a Van.” To stand out, he promoted his moving company as transcendental. “A man, a van, and a sense of a higher purpose,” he said.

Wilson became frustrated with what he calls the “New York City theater system.” Even a minor role on a television show just about guaranteed hiring for a stage production, he said. Wilson fondly remembers being called upon by Dowling for roles at the Guthrie in 1996 and again in 1998.

“I’ve had just a handful of experiences where the stars align,” he said. “You don’t have to be on a TV show to get a lead part at the Guthrie. Joe is so committed to the actors in this community.” Wilson described Dowling as “a Lucky Charms Leprechaun when he gets mad.”

“I’m kind of a weird-looking dude”

Moving to Los Angeles, Wilson took obscure acting roles, such as a naked android in 1999’s television pilot The Expendables. He again appeared sans clothes in the 2003 film House of a Thousand Corpses. “America just can’t get enough of my nakedness,” he said.

Wilson said a breakthrough role for him was HBO’s Emmy Award-winning series Six Feet Under. He had originally auditioned for a different role but asked if he could try out for the part of mortician apprentice Arthur Martin, a part he landed. “The Office [role] came about because of Six Feet Under,” he said.

Dowling asked Wilson if he knew anyone like his character on The Office, Dwight Schrute. “I grew-up with a whole bunch of Dwights. You can’t put your finger on what Dwight is.”

Wilson’s current projects are support of the Mona Foundation, from his hometown of Seattle, a grassroots education initiative. “This is like the perfect charity and it’s near and dear to my heart.”

Wilson and his wife travel to Haiti bringing arts education to juvenile girls. “We have been to Haiti several times, before and after the earthquake. We fell in love with the country and the people. It’s a beautiful place with a beautiful spirit.”

The Wilsons’ art education initiative with the Mona Foundation takes them to a 50,000 person tent city, built on a former Haitian golf course that’s now muddy and bleak. The Wilson’s try to empower juvenile girls living there through education and even teach theater games. “We just push the chickens out of the way,” he said

To create a more positive mark on the Internet, Wilson began his own website called SoulPancake, where people can ask “Life’s Big Questions.” Wilson has produced a New York Times bestselling companion book, which is more of a workbook, he said.

A highlight of the event was Wilson’s question and answer session with the audience. Many asked how to go about auditions; one young viewer asked Wilson to sign the t-shirt he was wearing, and he did so with loud applause.

It felt as if Wilson’s visit at the Guthrie was a way of giving back and to say thanks for offering him early breaks in his struggling acting years.

Praising the Guthrie’s new building, Wilson said, “I really do like this theater. In fact, I’m thinking of buying it some day.” 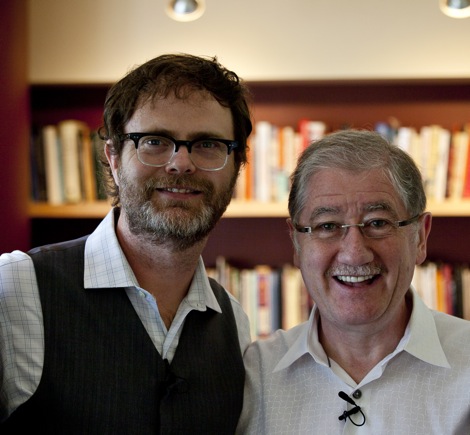 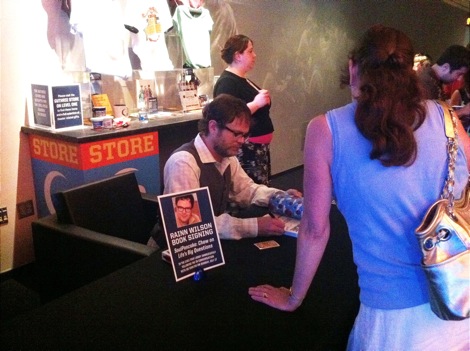 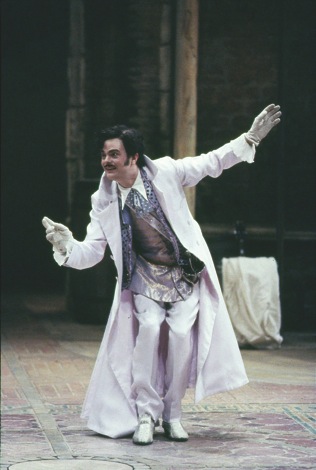 (Above) Rainn Wilson as Lelio in the Guthrie Theater’s 1998 production of The Venetian Twins, directed by Michael Bogdanov. Photo by Michal Daniel, courtesy Guthrie Theater. 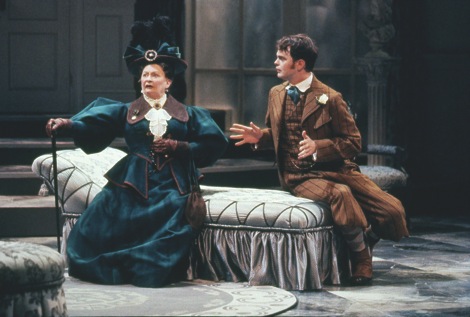 (Above) Barbara Bryne as Lady Bracknell and Rainn Wilson as Algernon Moncrieff in the Guthrie Theater’s 1998 production of The Importance of Being Earnest, directed by Joe Dowling. Photo by Michal Daniel, courtesy Guthrie Theater.