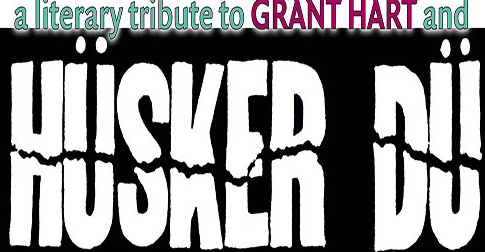 Providence, Rhode Island writer Matthew Derby regaled his adolescent influence by Husker Du “but maybe not how they would have wanted,” comparing Guns ‘n’ Roses drug references on Appetite for Destruction, to Husker Du’s on Candy Apple Grey.” Hilariously analyzing song-by-song, Guns ‘n’ Roses’ drug references were not clear, whereas Candy Apple Grey songs such as Crystal were crystal clear, and this was an anti-drug album by inducing sheer terror, making drugs sound “terrible.”

“No one will ever want to do drugs after hearing that song, which puts you in the mind of an addict. It’s scary when you’re sober, imagine if you hear it while on drugs!”

He had the audience cracking up in peals of uncontrollable laughter. Presenter Rain Taxi’s co-organizer Tim Horvath (New Hampshire) opted from reading his Books About UFO’s poem – “song titles have been done,” instead sharing his poem on how Husker Du influenced him two-fold:

As a solo artist and former Husker Du member, Grant Hart’s literary songwriting ranges from mythical to the deeper meaning of life, songs of loss, heartbreak, and redemption. Hart was both nervous and inspired, noting he’s used to antipathy in audiences, but tonight he felt love. Hart performed songs from his recent, universally acclaimed concept album The Argument –such as Awake, Arise, Shine, Shine, Shine, Hot Wax, a beloved solo song formerly written for Husker Du, 2541, and songs from his days as Husker Du drummer/singer/songwriter, including “Green Eyes,” “Sorry Somehow,” “The Girl Who Lives on Heaven Hill,” and Flexible Flyer.  Between songs Hart shared tragi-comedic stories, astute observations and Socratic questions leavened with his unique acerbic wit and vaudevillian flair, at times teasingly challenging audience members, and his interviewee, Horvath, during their Charlie Rose style conversation.

On his house burning down, he shared   “Suffer, and go back to performing like it was ’98, or challenge himself to move forward.”

“Don’t be afraid to lay your head on the tracks. Or not!” he quipped.