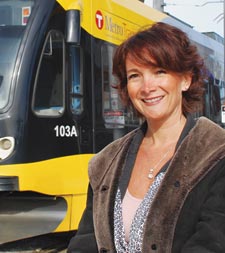 Electrical engineering consultant Beatriz Mendez-Lora was content to be a solo entrepreneur until the Central Corridor Light Rail Transit Project (CCLRT) came along.

Mendez-Lora, who earned her electrical engineering degree from Boston University, has come a long way since getting her start in the field as an intern in the electrical department of a Florida architectural and engineering consulting firm.

“It was the Central Corridor LRT Project that helped [my company] grow,” said Mendez-Lora, who started M-P Consultants 15 years ago. The Northstar commuter rail project, from downtown Minneapolis to Big Lake, was the largest project her company-Mendez-Lora and one CAD technician-had worked on until the CCLRT project. The current project will connect downtown Minneapolis to downtown St. Paul by 2014.

On CCLRT, her company’s primary role has been to design the electrical and communications systems for the 18 LRT station platforms and the operations and maintenance facility. That means coordinating the electrical service to the stations and maintenance facility, designing the lighting, heating and power distribution to other systems, the platform passenger information system, security cameras, fare collection, fire alarm, paging and intrusion detection.

The project has now shifted from engineering to construction and Mendez-Lora is among the engineers who are consultants on the project to assist the Metropolitan Council and the contractors with construction support and as other electrical issues come up.

In June 2000, Mendez-Lora was certified as a Disadvantaged Business Enterprise (DBE)-woman-owned or minority-owned business. She was working for an environmental engineering company at the time, designing electrical systems for water and wastewater treatment facilities. Her employer regularly subcontracted out a percentage of the work to other women-owned and minority-owned businesses. “After several years with my employer, I saw a niche and opportunity to provide these services as there were not many electrical engineering consulting companies that were woman and minority owned. I qualified for both,” Mendez-Lora said.

It was her DBE certifying agent who notified her about an opportunity to work on the Hiawatha LRT Project. In the spring of 2001, Mendez-Lora found herself working on the design-build team, assisting with park-and-ride lighting design, compliance with safety certifications and other electrical design work. Her firm then worked on the stations and the vehicle maintenance facility for Northstar.

“We have our eyes set on some larger projects here and other states outside of Minnesota,” Mendez-Lora said.