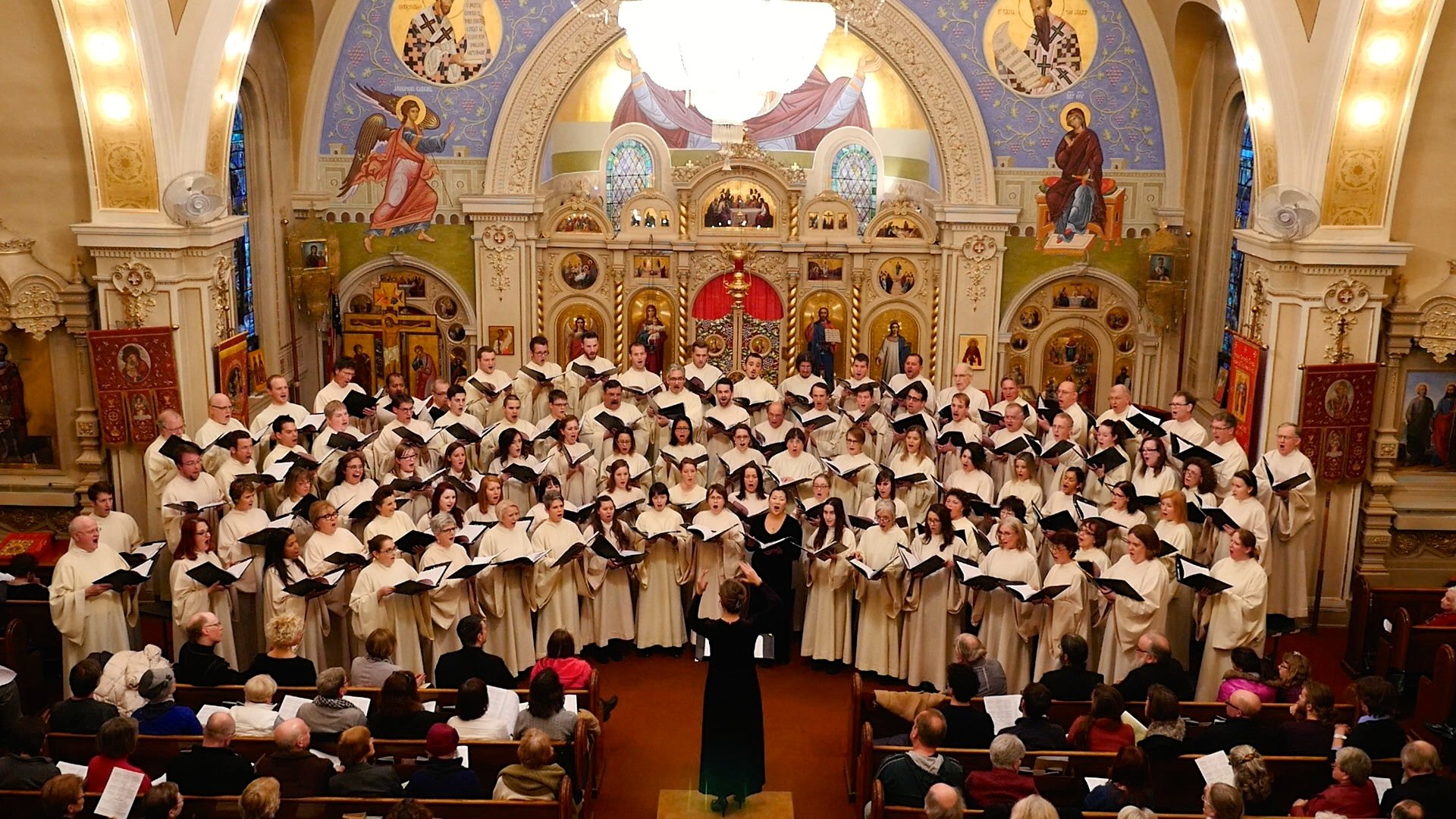 More than a hundred choristers gathered on Nov. 16 for two performances of Sergei Rachmaninoff’s All-Night Vigil in Minneapolis. This renowned but rarely heard choral masterwork packed pews and was brought to life through a joint venture between the city’s (Catholic) Basilica of Saint Mary and St. Mary’s Orthodox Cathedral.

Rachmaninoff’s All-Night Vigil (1915), often referred to as the Rach Vespers, is broadly acknowledged as one of the most beautiful and powerful large-scale choral works in the Western repertoire. It is also of legendary difficulty, being written entirely for unaccompanied voices (as required by the Russian Orthodox liturgy) that divide into as many as eleven parts in a single movement. One feature in particular frequently puts the piece literally out of range of even large college and church choirs: extremely low notes that are important and featured elements of the composition. The lowest bass part, a favorite of basso profundos, descends to a low Bb more than two octaves below middle C – a requirement that prompted the Vespers’ first conductor to remark, “Now where on earth are we to find such basses? They are as rare as asparagus at Christmas!” – an especially hard task (both for basses and vegetable shoppers) in a country where refrigeration was a rare luxury and the First World War was in all its terrible sway. Although the necessary singers were found for the premiere, a shortage of very low voices prevented Rachmaninoff’s chosen selections from this music from being performed at his own funeral.

This ironically low hurdle is more difficult to clear today than a century ago, thanks to a quirk of vocal pedagogy: American conservatories today produce growing proportions of high tenor and soprano voices. Many a conductor’s dream of conducting the Rach Vespers has shrunk in practice to a leading a few selected movements. Even well-established professional choirs can struggle with finding enough voices of appropriate caliber and lower range.

So how to overcome this obstacle? The answer posed this past weekend was to combine several choirs from opposite sides of the Mississippi: the Basilica’s Cathedral Choir and Schola Cantorum, and the Minnesota Eastern Orthodox Christian Clergy Association Choir from the Cathedral. The resulting 110-voice ensemble was jointly conducted by Sara Ann Pogorely and Teri Larson, and marked the 20th anniversary of the Icon Festival hosted by the Basilica of Saint Mary. (The festival itself was first created as an interfaith program by the Basilica’s Director of Music Teri Larson and Director of Liturgy and the Sacred Arts Johan von Parys.) Saturday’s performance was held in the Beaux-Arts expanse of the Basilica, while Sunday’s sounded in the Ukrainian Baroque interior of the Cathedral.

Hearing the Vespers in these two very different acoustics is a real treat for the ears – if you were able to get a seat. A large Orthodox contingent crossed the river for Saturday’s evening concert, stuffing the pews enough that the organizers had to print 150 extra programs and distribute the singers’ copies back to the audience; the following afternoon, not even standing room was to be found in the Cathedral sanctuary, with listeners spilling out of the worship space to pack into corridors, anterooms, and an overflow room. Despite a run-time of approximately 75 minutes and few pauses, the audiences sat (or, in Sunday’s case, mostly stood) quietly and attentively from start to finish. A pre-concert lecture by The Very Rev. Abbott John Magramm on Saturday night was also strongly attended.

The experience of listening to the Vespers in these two spaces is quite different. In the Basilica, the sound of voices has more space to propagate, creating a shimmering reverb that accepts louder dynamics while requiring greater separation between words and phrases. With the Vespers, this acoustic is at its best with the grand crescendos with which Rachmaninoff has laced the score; on the opposite dynamic extreme, as voices diminish to pianississimos, the resonance of the lowest Cs and Bbs is unearthly and clear – a sound the likes of which ears do not hear at even the loudest of rock concerts. In the Cathedral, the shorter ring time focuses the listener’s ears on the here and now, heightening the experience of the dynamic swells and ebbs that emphasize particular words and phrases. Those who came early enough to find a seat front and center had the best seats for the full immediacy of the sound and being awash in the complex interplay of different vocal parts.