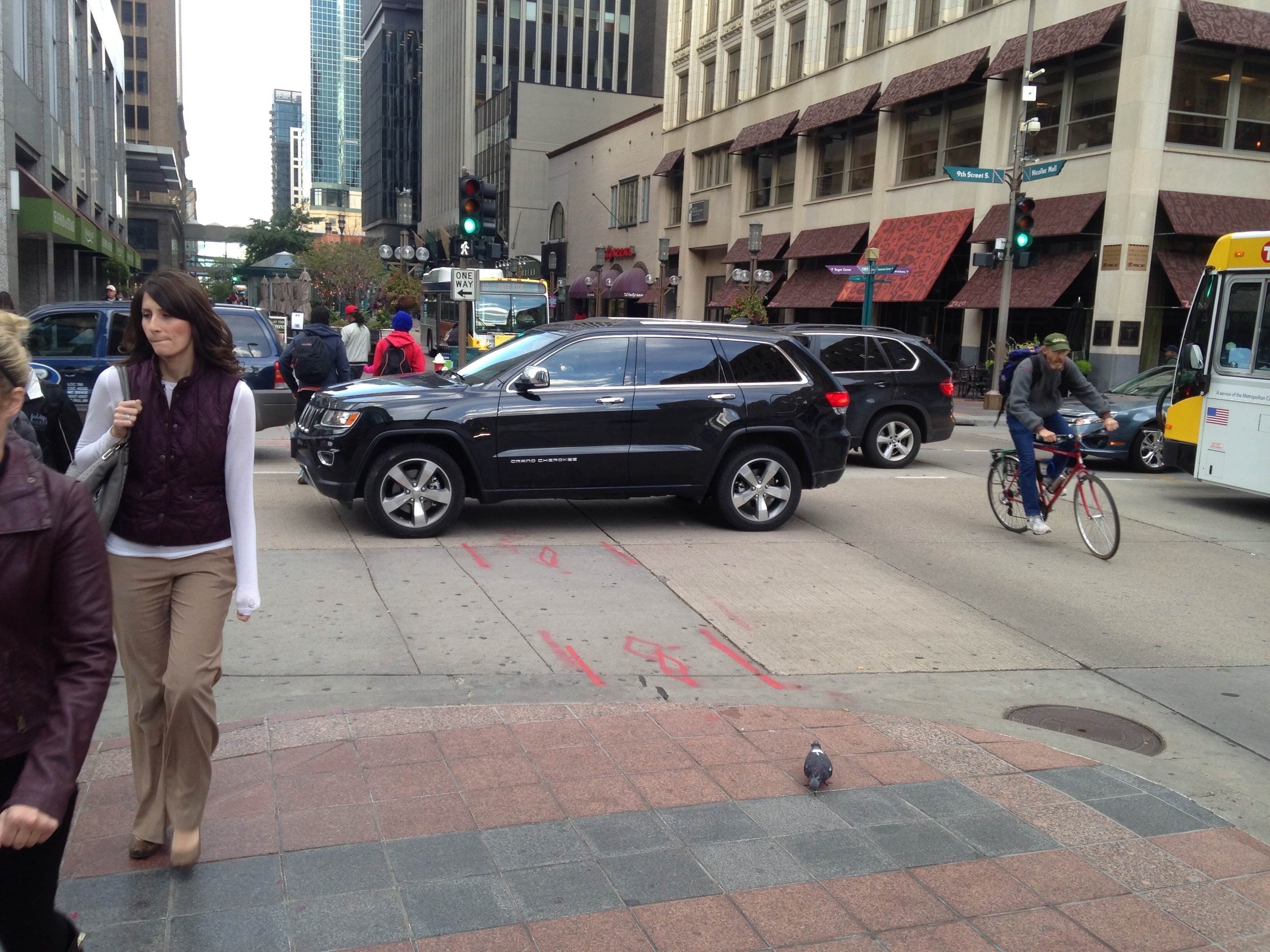 Last week, David Levinson asked whether we are “building a city” in the Minneapolis-St. Paul metropolitan area. He noted that rail investments only make sense in areas where there is sufficient density to support those investments. He further wondered whether Minneapolis and St. Paul could achieve those requisite densities for a majority of residents in core areas in 20 or 30 years.

While we may only be dabbling with building a city at the center of our region, Minneapolis already has densities sufficient to support a respectable transit system (St. Paul does not). This is encouraging because it means that smart transit investments in the city have a high likelihood of success.

But it is also discouraging that much of Minneapolis is transit-ready because it means the city should have better transit than it does. Perhaps the city’s poor transit system is the result of our decision makers’ priorities and experiences. As has been pointed out here and elsewhere, Met Council board members – who exercise control over Metro Transit – rarely “incorporate public transit into their daily lives — if they use it at all” because they are “often unable to include the additional time needed for transit in [their] schedule,” or they “can’t take it for work because [they] have to go to a lot of meetings.”

Maybe we can provide inspiration for smart local transit investments. After all, countless busy lawyers and financiers in New York and politicos in D.C. take public transit every day (as do a few busy people I know in the Minneapolis legal community). If they make it work, we can all make it work.

HIGH QUALITY TRANSIT IS A VIABLE OPTION IN MINNEAPOLIS TODAY 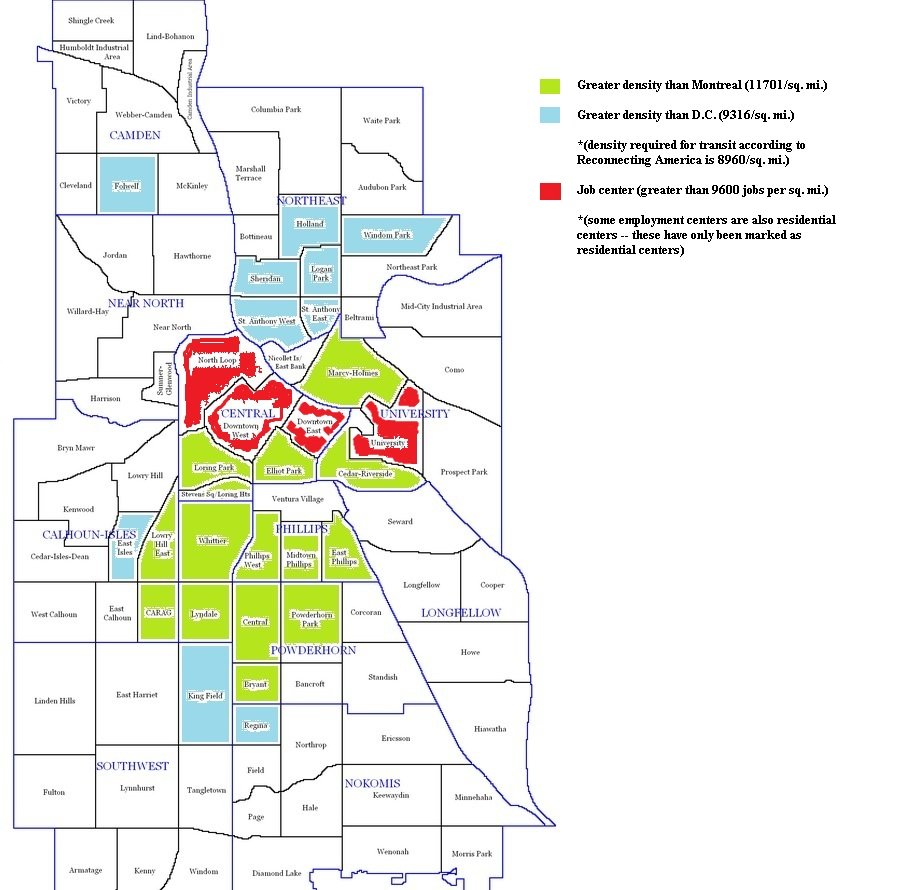 What can we do to improve speed in this dense Minneapolis core? Some might point to the city’s approved streetcar network, which covers much of the same territory as the Hi Frequency system:

But the city and Metro Transit have indicated that our streetcars will operate within personal automobile traffic (the Midtown Corridor streetcar will be an exception if it is built). Therefore, any discussion about how to improve streetcar timing applies to our current bus network and vice versa.

So why not push to maximize our current system, even through pilots, before laying track? We could learn a lot, and improve a lot of peoples’ everyday lives, by experimenting with speedy bus corridors.

The #18 bus, which primarily runs along Nicollet Avenue South and Nicollet Mall in Minneapolis, provides a nice case study for reliable yet inefficient service and for opportunities to fix these inefficiencies. Much of the #18’s route is part of Minneapolis’s first planned streetcar line.

The #18’s timing woes are the result of many factors. Most can be classified into three general categories: (1) necessary delay, (2) delay that occurs due to the transit system’s priorities, and (3) delay that results due to prioritization of other modes of transportation (some causes of delay, such as requiring that riders pay fares on the bus instead of at the stop, do not neatly fall into one of these categories).

First, buses necessarily travel slower than other vehicles because they must take time to slow down as they approach a stop, must stay stationary to pick up passengers, and must take time to get back up to speed. This delay can be mitigated if buses are given their own lane.

Second, Metro Transit has determined that the #18 should stop nearly every block for much of the route. The agency believes this will serve more users and more types of users.

Finally, other factors explicitly prioritize cars over buses. Those factors with the most impact include requiring buses to lose time pulling in and out of traffic at stops and timing lights for cars instead of giving buses signal priority or preemption.

On routes where personal automobile traffic counts are magnitudes higher than bus ridership, these last factors may be logical from an efficiency standpoint, although the traffic counts and ridership numbers are influenced by the relative efficiencies of the respective systems. Commute figures on Nicollet, however, are not magnitudes apart.

Vehicle counts on Nicollet Avenue between 25th and 26th Streets are 9106 per day. Assuming 78% of vehicles are single occupancy (Minnesota’s average) and assuming 2.5 people in the remaining 22% of vehicles (this number is a guess), total car ridership at that point on Nicollet is about 11,500 per day.

Daily bus ridership on the full #18 route was 10,949 in 2010. It appears reasonable to assume that well more than half the #18’s rides traverse part of the route between 38th and 4th – anecdotally the bus is most crowded between Lake and 7th Street in Downtown, and the boarding map on page 93 of this Metro Transit technical memorandum shows the route’s heaviest boarding between downtown and Lake Street.

These numbers do not provide an apples-to-apples comparison because they contrast route-wide boarding data with traffic counts at a specific place. However, the figures provide enough information to show that the number of people traveling by car along Nicollet do not vastly outnumber bus patrons along the route. Notably, car passenger and bus ridership numbers are similar magnitudes even though the #18 is anywhere from 2 to 4 times slower than a private car on Nicollet. 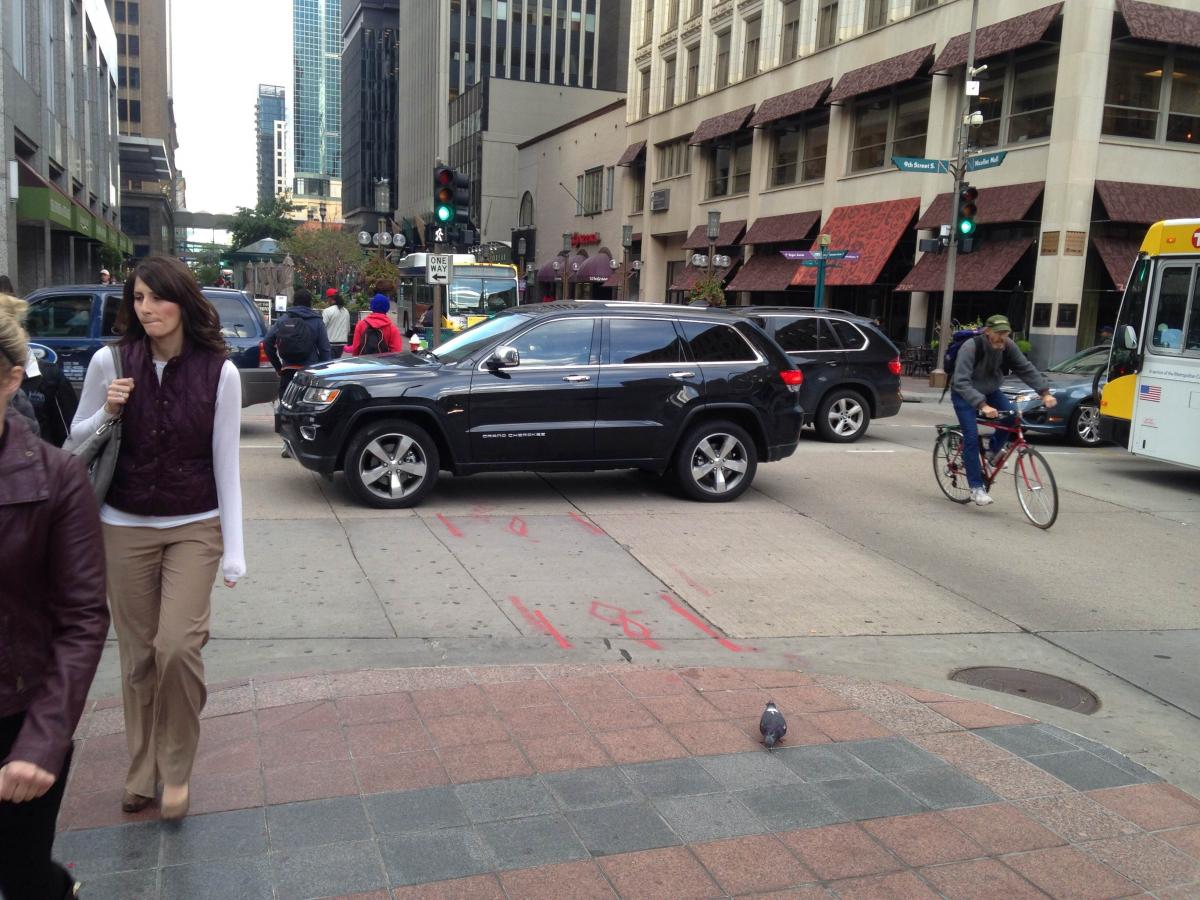 $512 of ungathered city revenue on Nicollet Mall. This photo taken after I made my way through the intersection of stand-still vehicles.

Car travel from one point to another on Nicollet is more than twice as fast as the bus in part because those factors that explicitly prioritize cars over buses – placing buses in car traffic, making buses pull over to stops, and timing traffic lights for car speeds – are all in place for much of the route. Yet even on Nicollet Mall in downtown, where the city prohibits private automobile use, signal priority remains non-existent. In addition, private automobiles on cross streets are constantly blocking the intersection when buses have a green light. Although this “blocking the box” is a violation under state law that earns box blockers a $128 ticket, I have never seen someone ticketed for this offense in downtown.

These street design elements, traffic signal timing, and lack of enforcement reveal city, regional, and cultural priorities in favor of the automobile.

Metro Transit takes a lot of flak for inefficiencies and deficiencies in the system. Some of it is deserved, and the agency is gradually addressing some rider concerns. However, much of the responsibility for our bus system’s inefficiencies lies with municipal governments.

Cities, not Metro Transit, are usually responsible for traffic signals. Although there has been a lot of attention paid to green line signal priority and route speed on streets.mn and elsewhere, few discuss that signal priority and preemption could just as easily be used for our existing bus systems.

So what would happen if the City of Minneapolis prioritized the #18 bus within the Minneapolis density zone by giving it dedicated lanes and full signal preemption?

I am not an engineer and cannot calculate how bus stop frequency vs train station frequency would affect efficiency gains, nor can I calculate how much time would be gained from giving the #18 dedicated lanes where it does not need to pull in and out of personal automobile traffic. Nevertheless, it appears safe to assume that signal prioritization or preemption would dramatically decrease travel time on the #18.

Here is a quick and easy way for Minneapolis (and perhaps eventually St. Paul and surrounding on-the-grid suburbs) to become a more functional urban environment: take all segments of all Hi Frequency routes that run through neighborhoods that achieve a transit-supporting density and give those routes signal preemption and dedicated lanes (where feasible), even it it means removing a travel lane and/or parking lane for cars on the route.

This would reward the 162,000 Minneapolis residents who live in urban densities with urban facilities and might jolt other Minneapolis residents into realizing the benefits of density in their back yard. It would also make life instantly better for those dependent on transit and would make it possible for people with busy schedules to feel that they can take transit at least some of the time.

While explicitly rewarding density with transit investments may seem like a high political hurdle, it is not without precedent: Peter Albert, at SFMTA, gave a talk at the Pro Walk Pro Bike conference on doing just this in the Bay Area.

WHY WE NEED EFFICIENT TRANSIT

Public transit has the potential to be a positive and defining feature of a city and region. However, it has to be pleasant and efficient. Yes, trains are wonderful and I am glad that the Twin Cities is investing in rail. However, we cannot wait the decades it will take to build out our rail network to better our transportation system, and we should not settle for continued slow transit.

Minneapolis is a great place to pilot some better bus lines in anticipation of streetcars:

Improving transit in Minneapolis’s core would not solve all our problems. However, improving transit in the city’s urban core would make many people’s lives better and would incentivize further urbanization of the city. It would take some coordination between the city and Metro Transit, but it would be worth the effort.

[1] Currently, according to Metro Transit’s own schedule, it takes 27 minutes to take the #18 bus from the commercial node at 38th St. South to the Library Central Branch on 4th St. downtown. This accounts for no delays (the #18’s on-time percentage is about 90, with “on-time” defined as “departing between one minute early and five minutes late.”).

Metro Transit’s #18 schedule also does not account for time spent waiting for the bus (wait time ranges from 5 to 15 minutes from 6:00am to 7:00pm). Some (mainly non transit users) argue that this wait time should not count toward the trip time because they believe riders should acquaint themselves with the schedules. However, I count this time because life (and meetings, for the busy among us) is not always predictable – an important side conversation can delay exit from a home or office and force the rider to miss his or her bus. Meanwhile the same conversation delays a car driver exactly the duration of the side conversation.

Trip + wait time + 5 minute “on-time” grace period means that taking the #18 from 38th St. to 4th St. should take somewhere between 27 minutes and 47 minutes. I did not count time spent walking to the station or bus stop toward the trip time on the theory that both transit users and car drivers must walk to their vehicle (although instances where transit is closer than a parking facility are few).

I followed the same logic to calculate trip times for a trip time reduction from 67 to 48 minutes (28% faster). This would knock 7.7 minutes off our hypothetical trip (to 19.3 minutes). Maximum wait time would drop to 11.8 minutes (rush hour to 5.9 minutes).