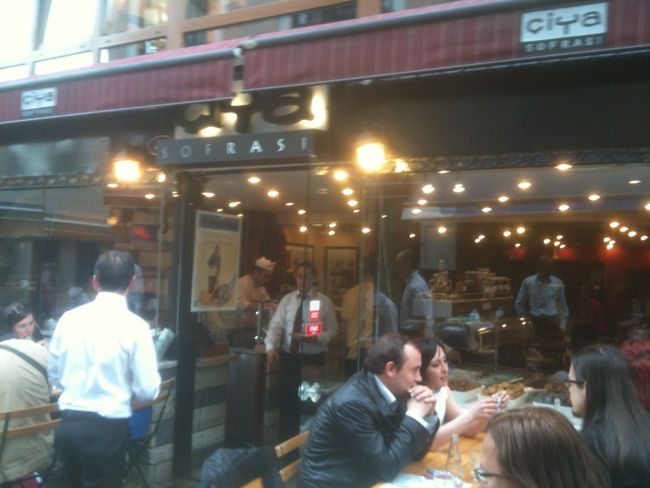 I just flew in from Istanbul, and boy are my arms tired. I’m also jet-lagged and writing on deadline, so my apologies in advance for this disjointed ramble across continents, from Kadikoy and Sultahahmet in Istanbul, to Linden Hills and Uptown in Minneapolis.

We had terrific food in Istanbul, but two restaurants stand out, one on each side of the Bosporus. After reading a fascinating piece in the New Yorker about chef Musa Dagdeviren, I decided I had to visit Ciya Sofrasi, his restaurant in Kadikoy, on the Asian side. Dagdeviren has made it his mission to preserve the disappearing dishes and food traditions of the Anatolian countryside, and his restaurant is where he puts that rich culinary legacy on display. 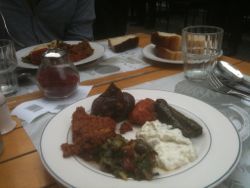 I expected something very fussy and formal, but Ciya Sofrasi is surprisingly casual and inexpensive. As you enter the restaurant you first turn to your left to fill a plate with cold prepared dishes, such as stuffed peppers, roasted eggplant and hummus,  (charged by weight) and then turn right to select from a big variety of hot stews, soups and casseroles. My favorites included the stuffed squash, and a stew of lamb with eggplant and tomatoes, but there were many more that I wished I could try. The basic dishes weren’t that different from the mezze and stews on offer at countless other Istanbul eateries, but these were almost always distinguished by subtle nuances of flavor and spicing. Guneslibahce Sokak 43, Kadikoy, Istanbul.

The other highlight was a sweet shop called Hafiz Mustafa. There are several locations, but the one we visited, in the Sultanahmet district on the European side of the Bosporus seems like a step back in time, to the tea salons of Paris or Vienna a century ago. The big difference was that the sweets, which came in dozens of varieties, were all variations on Turkish themes of baklava, Turkish delight, kanaif, crisp braids of shredded wheat wrapped around pistachios, walnuts or hazelnuts, and puddings in all the colors of the rainbow. If you get to Istanbul, you have to try it. Divanyolu Caddesi 14, Sultanahmet, İstanbul.

Meanwhile back in Minneapolis… 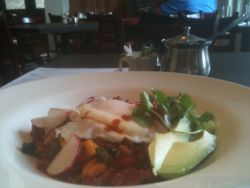 I had a terrific lunch today at the newly opened Harriet Brasserie, next door to Trulia at 2724 W. 43rd. I wasn’t exactly anonymous – nearly everybody from owner Alain Lenne and chef Fernando Silva to manager Sharone LeMieux (of Simpletones fame) spotted me the minute I walked on the door, so I can’t guarantee that the food is as consistently good as the dishes I sampled. I ordered the crawfish and grits ($13), a impossible rich concoction of crawdad tails, andouille, avocado, sliced radish and red pepper, accompanied by a creamy cheddar cheese grits. Lenne stopped by with samples of several other dishes, including a smooth and sensuous chilled pea soup, and a tres leches cake with a Brazilian twist (one of the three milks in Fernando Silva’s version is coconut milk) — both delectable. For now, they are only open for breakfast and lunch, but plan to open for dinner as soon as their wine and beer license arrives – hopefully by Labor Day weekend.

Last night, we went to the Lagoon Theater in Uptown see Jiro Dreams of Sushi, a documentary about an 85-year-old master sushi maker with a single-minded dedication to his craft. Customers reserve tables at least a month in advance to dine at Jiro Ono’s 10 seat Tokyo sushi bar, Sukiyabashi Jiro, the only restaurant of its kind to win the coveted Michelin three star rating.  All he serves is sushi, and there is only one choice on the menu: a fixed price meal of 20 pieces of sushi for 30,000 yen, (roughly $375). What’s perhaps most remarkable about the food Jiro Ono serves is its simplicity — no fancy specialty rolls, no complicated arrangements, just slices of raw fish, or octopus or shrimp on a lump of vinegared rice, but with painstaking attention to every detail, from sourcing the very best tuna available at the wholesale fish market, to cooking the rice so that texture and temperature are exactly right. Lots of food for thought here — and not just for foodies.

Coming out of the movie, we felt like sushi, so we headed across the street to Social House, which offers a late night happy hour from 9 p.m. Mondays through Wednesdays: half-price drinks, small plates and selected sushi. We ordered the tuna tataki (reg. $13; $6.50 during happy hour) and a #9 specialty roll of tempura shrimp, cucumber and spicy mayo, topped with salmon, avocado and eel sauce ($7 / reg. $14) and a yellowtail maki roll ($3/$6). It was pretty much like commodity sushi everywhere else these days, but the setting is beautiful, and even if the food is no match for Jiro Ono’s masterpieces, it’s good enough to be enjoyable. And our tab for two, including a glass of wine and the house sake ($4 each during happy hour), came to $32 with tip — a lot less than we might have spent in Tokyo.