Just as the City of Minneapolis is promoting a fourth public open house to present and discuss options for streetcars or enhanced bus service along Nicollet and Central Avenues, the respectable blog streets.mn has taken a hard shot at the economic wisdom of investing about $200 million in slow, shiny trolleys along two of the city’s major commercial spines. 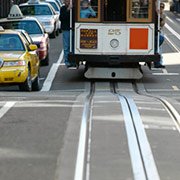 This follows sharp questions about the streetcar proposal posed in July by Susan Haigh, chairwoman of the Metropolitan Council, which is the Twin Cities’ chief transit planning and operating agency.

Streets.mn is a nonprofit website with nearly 50 occasional contributors ranging from exurban commuters to transit, bicycling and alternative energy advocates to professional planners to transportation and land use gadflies such as Charles Marohn Jr. of Strong Towns and University of Minnesota Prof. David Levinson. I’d call its policy orientation skeptical urbanism.

Levinson, a rock-ribbed analyst whom I’ve quoted with admiration in the past, wrote the highly skeptical post last week. Although “co-evolution of transport and land use” years ago in many places, including the Twin Cities, “increased accessibility, making land more valuable,” he began, ” … we have no evidence that streetcars, of themselves, promote economic development in the context of present-day [largely developed] U.S. cities.”

What follows is a long epistemological discussion of how we can or can’t know what the effects of the proposed streetcar project would be in the “absence of evidence.” It befits a Ph.D. scholar, I guess, but I was more enlightened by his terse conclusion: “Streetcars are an amenity, like stadiums, festival marketplaces, entertainment blocks and new convention centers. Are they the best amenity? Are they the best transportation service possible? Or do they drain resources that would otherwise be spent on something else, like maintaining and improving existing transit systems or serving many more passengers with arterial BRT [bus rapid transit]?”

I don’t know the answers to these questions for sure, but they certainly ought to be asked. The Met Council’s BRT initiative, for which funding hasn’t been identified, would increase transit speed and capacity along up to a dozen commercial arterials. It’s doubtful that streetcars could improve much more than the comfort and appeal of the transit riding experience.

The Sept. 9 open house at the Minneapolis Central Library will include a 5:30 p.m. summary of a “detailed evaluation of modern streetcar and enhanced bus options for the Nicollet-Central Corridor” and an opportunity for citizens to “share their ideas on a preferred alternative.” Three earlier sessions were held last month.

In addition, the city has extended the public comment period on its evaluation of alternatives to Sept. 15. An online comment survey is available on the project website, minneapolismn.gov/nicollet-central. Comments also may be submitted by email to czimmer@zanassoc.com.