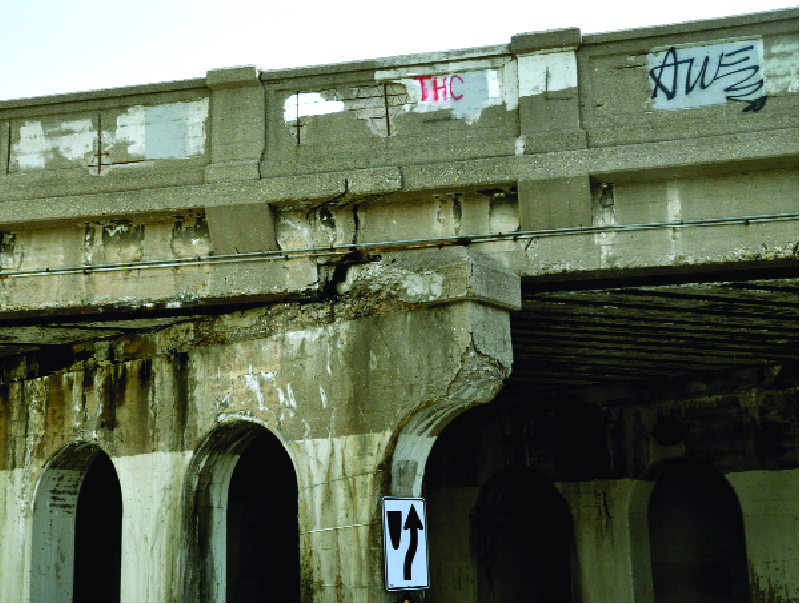 Crumbling concrete can be seen on the Monroe Street bridges. They worry about what could happen should an accident occur with tankers carrying volatile oil. (Photos by Tim Budig)

Lynn Wrabek and Steve Liston have long felt a little apprehensive about the chance of being struck by a chunk of falling concrete while driving under some Burlington Northern Santa Fe (BNSF) railroad bridges in their Logan Park neighborhood.

But the arrival of the “black trains,” trains pulling tank cars brimming with oil from the Bakken oil fields of North Dakota, oil known for its flammability, has the couple emailing local officials on question of railroad bridge safety.

The bridges especially worrying Wrabek and Liston are the BNSF bridges at the intersection of Monroe Street and 18th Avenue. On a recent Saturday morning, they took a visitor on a tour, pointing out cracks, crumbling concrete, exposed rebar on the bridge columns.

Wrabek and Liston, who live close enough to the rail lines that vibrations tilt pictures on the wall, say they are not anti-rail. But they’re deeply concerned. “I don’t want to be at work or away and learn my house has blown up — or be in it,” Wrabek said.

Wrabek and Liston have been emailing photos of the bridges to public officials. They have also have taken photos of bulging tank cars rumbling over the bridges.

According to the Minnesota Department of Transportation (MnDOT), on average six oil-trains a day hauling Bakken oil pass through the metro. Of the six, BNSF would likely be hauling five, said a MnDOT official.

Wrabek and Liston are not unique in their concern over railroad bridges in Logan Park. Nancy Przymus, who assists the Logan Park Neighborhood Board, said residents wonder whether the railroad bridge work closing Central Avenue is actual fixing the worst bridge. 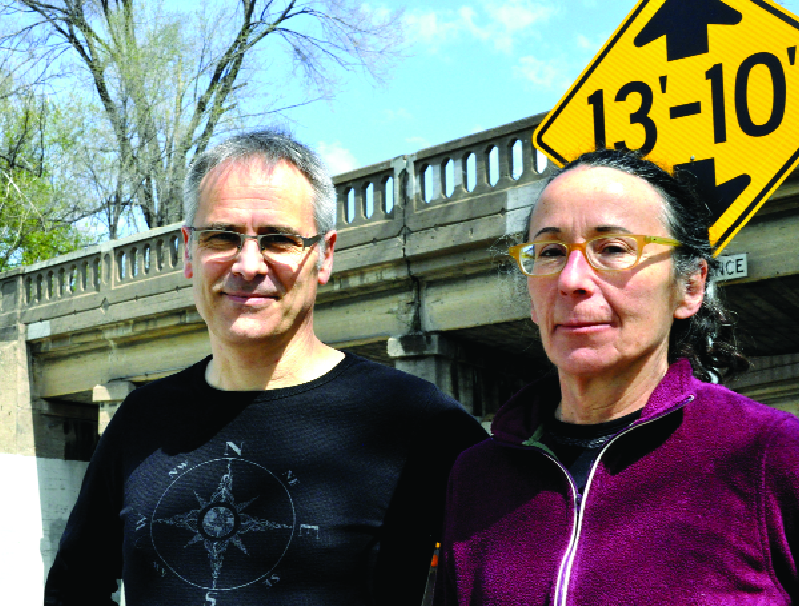 “People have been concerned about the bridges for a long time,” Przymus said.

State and local officials have limited roles in railroad bridge safety. Tom Styrbicki, an engineer with the MnDOT Bridge Office, said the inspections state and local officials perform are largely with an eye towards traffic safety than overall structural integrity of the bridge. The latter task, by federal law, is left to the railroads, he noted. The BNSF Monroe Street and 18th Avenue bridges show mixed grades in categories such a bridge deck condition as recorded in a MnDOT database.

Historically not only have railroad bridges needed to be strong enough to support the tremendous weight of steam locomotives, but strong enough to withstand the vibrations from the chuffing as the trains move along, Styrbicki said.

While the Monroe Street bridge has the date “1924” etched in its concrete surface, it’s fairly new by Twin City standards, Christianson said.

Amy McBeth, BNSF spokeswoman, in a May 14 email said in response to public inquiries about the Monroe and 18th Avenue bridges, BNSF inspectors inspected the bridges again this week and found them structurally sound. All BNSF bridges are inspected at least twice a year — more than required by the Federal Railroad Administration, McBeth said.

“The condition of the concrete at some locations is not an indication of the structural integrity,” McBeth said in the email.

Wrabek, who also received McBeth’s email, found the response helpful, if somewhat lacking. “I wish she would acknowledge that crumbling appearances (of bridges) are not reassuring to the community that lives with them and that they need to fix the crumbling concrete now,” Wrabek said in an email.

The Logan Park Neighborhood Association is expected to discuss railroad bridges, safety and emergency response especially as it relates to the current bridge replacement, at the Logan Park Community Center May 21 at 7 p.m. The general public is welcome.

Railroad bridges are sprinkled across Minnesota. According to MnDOT’s database, 338 railroad bridges cross public roadways in the state with about half of these found within MnDOT’s Metro District. BNSF has more than 40 bridges in the metro, according to the database.

Minnesota saw a record amount of freight shipped by rail in 2011, Christianson said. Between a 100 and 110 trains a day roll through the metro, he said.

According to MnDOT, nationally about five percent of total railroad car loads consist of crude oil. About 700 miles of track in Minnesota carry these hazardous shipments, Christianson said.

Shipments from the Bakken oil fields travel through the metro to destinations to the east, while southwest Minnesota sees oil trains from North Dakota clip through on their way south.

Approximately 99.9977 percent of all rail hazardous shipments, according to MnDOT, arrive at their destinations without incident.

In terms of emergency response to derailment or spills, Christianson is more concerned about the capabilities of small town fire departments in Greater Minnesota — departments with limited budgets and volunteer turnover — than first-responders in Minneapolis or St. Paul. If a major rail accident happens in Greater Minnesota in a small town, four hours later the town would be packed with first responders from all over the state, he said. “But for that first hour, they’re (small town responders) on their own,” Christianson said.

In Minnesota, as part of its free national first responder training program, BNSF has trained more than 730 first responders since 2009, McBeth said.