On May 26, 2010, some friends of mine and I went to the much ballyhooed and well attended “GET MOTIVATED” business seminar at the Target Center. In the weeks prior to the event many full page ads had been placed in the StarTribune which read:

I was flabbergasted! Take charge leadership, for sure! Powell was the person who went to the United Nations, as George Bush’s Secretary of State, to sell the world an unnecessary, illegal, and immoral war against Iraq, based on lies. After that, he helped prosecute the war. In my opinion, Colin Powell should be tried for war crimes, not paraded around as a model for business success. As to rapidly expanding your circle of influence, shouldn’t we worry about moving too fast so that huge mistakes are made, and shouldn’t there be some ethical considerations? I’d be more impressed with an expanding circle of caring than with an expanding circle of influence. Instead of taking charge and rapidly expanding one’s influence, how about practicing a more democratic model? How about leaders listening to and serving the people? There are considerations more important than reducing costs and increasing profits, as we have painfully discovered with the way British Petroleum has operated in the Gulf. As to Colin Powell’s mantra on reducing costs, who is left to pay for the trillion dollar war that he, in a large way, helped start? Just who is it the profits from the war that Colin Powell promoted and who are they that die?

So, we bought cheap tickets and went to the Get Motivated business seminar, with a mind to bring some sort of balance to the event. We had several questions that we wanted to ask – some general questions, and some questions for each of the featured speakers: 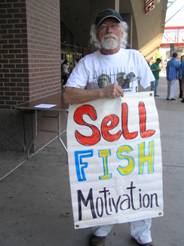 TO ALL: MOTIVATION WITHOUT ETHICS? WHY?
COLIN POWELL: WILL YOU MOTIVATE US TO START MORE WARS?
ZIG ZIGLAR: CAN YOU SHOW US GOD’S WAY TO EXPLOIT THE POOR?
RUDY GIULIANI: ARE YOU MORE THAN A NOUN, A VERB AND 911?
RUDY GIULIANI: HOW DO YOU MOTIVATE FIREMEN WITHOUT CARING FOR THEM?
SARAH PALIN: HOW DO YOU MOTIVATE WITHOUT THINKING?
BRET FAVRE: WHAT POLITICAL INTERESTS ARE USING YOU HERE? DO YOU CARE?
RON GARDENHIRE: WHY ARE YOU THROWING US A CURVE?
STEVE FORBES: CAN YOU HAVE TOO MUCH MONEY?
STEVE FORBES: HOW DO YOU FIND OUT WHO’S RICHEST AND HOW TO SUCK UP TO THEM?
TAMARA LOWE: IF SOMETHING IS GOOD OR WORTHWHILE, WHY DOES IT NEED TO BE SOLD?
TAMARA LOWE: DO YOU SOMETIMES WONDER IF YOU ARE SELLING YOUR SOUL?
COLIN POWELL: SHOULD YOU BE TRIED FOR WAR CRIMES?
TO ALL: SHALL WE PUT PEOPLE BEFORE PROFITS? 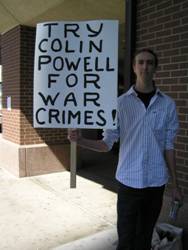 We got into the event about an hour or so late. We heard just a little bit of the first speech of the day, by Ron Gardenhire. Colin Powell was the next speaker. We couldn’t help offering some rebuttals to the self aggrandizing distortions of the truth being offered by Mr. Powell. So we were kicked out of the meeting. Then we bannered and protested on the sidewalk outside of the Target Center. We were repeatedly told that we had to leave the sidewalk, by security officers at the Target Center. We protested that we had a constitutional free speech right to be there, but when they threatened to arrest us we did walk off.

But we came back again and again. They kept telling us to leave. It seemed that if we kept moving, security officers would follow us around without being very forceful in their demands that we should leave. We were also asked to get off the sidewalk at some of the businesses across the street from Target. At the open air restaurant across the street from Target we were told that we were not allowed to be there, because it was a “PUBLIC sidewalk”. We said, “Do you mean, private sidewalk?” The security officer repeated that we couldn’t be on the public sidewalk. Later she said that we couldn’t be on the private sidewalk. It was really quite funny. We just kept walking around and around, leaving when the security police got stern about it and coming back, again and again.

I didn’t hear of any protest of this event, except for ours. I think this silent complicity in greedy business practices and war crimes is a sad commentary on our culture.

The Get Motivated business seminar has been traveling from one major city to the next, with pretty much the same cast of characters, except that they use local sports figures instead of the same ones. The next stop for the GET MOTIVATED business seminar will be at theQwest Center in Omaha, Nebraska, Monday, June 21, from 8 AM to 4:45 PM. Colin Powell, and many of the others who spoke in Minneapolis will be there.