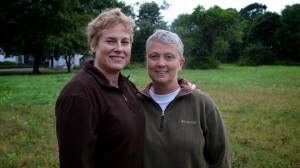 Yearning for marriage has been a part of Darlene Huntress’s life since as early as 1986, when standing as the maid of honor in her sister’s wedding; she gave a toast adapted from a Native American marriage blessing. Recorded on video for posterity, Darlene’s strong demeanor, while not appearing overly comfortable in her bridesmaid dress, is clear as she articulates her aspirations for marriage. “Ever since I was a little girl, I always dreamed that anyone close to me, myself, or my sister or my friends, would marry someone like my daddy.”

Fast forward to the present, and Huntress, now nearly a quarter century older and a marriage equality activist, still dreams of her wedding. “I don’t want to change a damn thing about marriage,” she shares in an interview. “I just want it for me too; and I think I deserve it.”

Clearly a lot has happened in the intervening years between a young woman’s congratulatory speech to her newly wed sister, and the advocacy of a lesbian woman who simply wants to marry the woman she loves.

As Minnesotans debate an amendment to the state constitution that would define the legal limit of marriage as being between one man and one woman, it seems that Huntress’s story could be taking place in Minnesota. But it didn’t. Huntress grew up in Maine and was at the center of a whirlwind six-month campaign to outlaw same-sex marriage in the northernmost New England state. Between May and November of 2009, Mainers debated the legal status of same-sex marriage following the first-ever legislative passage of a law granting same-sex couples the right to marry.

Huntress served as the Grassroots Director for No On One, the organization that advocated for marriage equality, and is a central character in Question One, a documentary directed by Joe Fox and James Nubile that chronicles the story of the 2009 campaign and election that decided the legal status of same-sex marriage in Maine. The film, which was featured during the 2011 Twin Cities Film Fest, will have encore screenings May 14th to 19th at the Theaters at Mall of America.

There are important similarities and differences between the battle over same-sex marriage in Maine and the current debate surrounding Minnesota’s own constitutional amendment that will appear on the ballot in November. Maine’s campaign focused on the repeal of a law granting same-sex couples the right to marry that was passed by the state legislature and signed into law by Gov. John Baldacci. In Minnesota, same-sex marriage has never been legal and the present campaign is focusing on a ballot measure that would prohibit future state legislatures and courts from granting this right to same-sex couples.

Both states share a similar cultural milieu, with a historically strong live-and-let live attitude among its citizens. Maine, as is also presently the case in Minnesota, relied heavily on conservative churches and religious organizations to convince voters to support measure banning same-sex marriage.

Another similarity worth noting is the involvement of organizations from outside the respective states in the pro-ballot-measure campaigns. Question One documents the controversial leading role of California-based campaign consultants Frank Schubert and Jeff Flint as referendum proponents. The Schubert-Flint Public Affairs agency was engaged by the Yes On One campaign organization to drive the strategy for the Maine campaign. This is the same organization that led the 2008 anti-same-sex marriage campaign in California, and has since been the national leader in efforts across the country to outlaw same sex marriage in other states.

As Question One unfolds, it becomes quite clear that the official leadership of the Yes On One campaign is taking its orders from Frank Schubert. Marc Nutty, campaign co-chairman, speaks frankly in the film of his discomfort of the tactics employed by Schubert.

In Minnesota, it has been reported by Minnpost.com that Minnesota for Marriage has paid $111,000 to the Schubert Flint public relations firm for campaign management services. It remains to be seen how Schubert Flint will influence the vote on Minnesota’s anti-same-sex marriage constitutional amendment.

Question One brings a dramatic sensibility to the telling of the story of the campaign. For three months, Fox and Nubile and their crew shadowed the leaders and foot soldiers of the campaign as they engaged in hands-on work and shared candid reflections of their passionate belief in marriage, equality, civil rights and morality.

What is notable about this film is the balance it brings telling the story. The film focuses on a core set of characters who work on both sides of the campaign. Their stories are told in an unvarnished way, without manipulation. Fox and Nubile treat their subjects with respect, allowing them to appear sympathetic and flawed as the words of their individual stories dictate to the viewer. 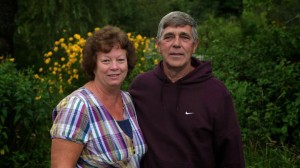 Right: Linda Seavey, a volunteer with Yes On One with her husband in Plymouth, Maine.

The film moves with dramatic pacing. I purposely did not refresh my memory on the historical events, because I did not want to know the outcome of the campaign. Within the context of this film, election night is a nail-biter, and for those who want to maintain the mystery before seeing the film, I won’t comment further on how things turn out.

I interviewed director Joe Fox about the film. Fox, who is gay, grew up as the son of an Orthodox rabbi and cites this life experience as critical to the lens he brought the story of the battle over marriage in Maine.

One of the lessons from Maine for advocates of marriage equality is that it is a mistake to underestimate the passion of people who are opposed to same-sex marriage. Fox says that it comes down to meaningful conversations.

“How do you present yourself as an individual to someone else with the hope that maybe you could change their way of looking at you, and in turn change their way of thinking about gay people,” he said. “That is a mighty tall order, but that is how change is ultimately accomplished – one person at a time.” 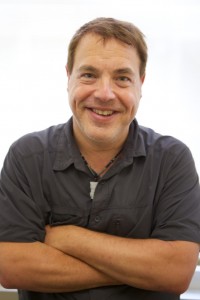 Fox says he had to draw on the power of individual conversations as he built relationships and established trust with the principals of the Maine campaigns. With The Rev. Bob Emerich, co-chair of the Yes One Campaign, Fox’s Jewishness leads the way. “Once I spent some time speaking with him…[I learned that] he is a man who didn’t start out with faith… and he found his way to religion. And I was raised in faith, dropped out of faith, and came back to faith. That’s what brought us together and allowed us to have a substantive dialogue.”

In his career as a documentary filmmaker, Fox says he has learned that telling a story depends on the ability to listen and hear where the other person is coming from. “We need to find empathy in order to have [the principals] express their point of view in a meaningful way. If I didn’t, the film would end up being a didactic piece of baloney.”

Fox says that for this film the key to making this happen was his background as a gay Orthodox Jew who also was adopted. “I always grew up feeling like I was on the outside looking in, that I was marginalized. That was how I connected with people who opposed gays and lesbians getting married. The common thread I found when talking to these people was that they felt like their voices were being shut out. They felt that they were the ones being marginalized. They grew up in a world where they had a sense of what is right and wrong, believing that homosexuality was a sin and still is a sin. They are now finding themselves in a world that they no longer understand, and that according to their perceptions has shut them out. They are bewildered by a cultural revolution that has left them on the sidelines.”

Fox said that he connected with their sense of feeling powerless, using his experience of being marginalized as a portal through which he found empathy. “[In effect] it made me able to step into their shoes, get into their souls and see their hearts.”

Through the process of documentary filmmaking, Fox shows that there are parallels to capturing complex stories on film in an accurate and meaningful way, and engaging in an impassioned political campaign in which morality and ethics are a bottom line for both sides. Fox said “It all happens one conversation at a time…and every single vote counts.”

Question One plays at the Theaters at Mall of America May 14th – 19th, at 7pm each evening. Joe Fox will be present at the screenings to answer questions. More information and ticket purchase is available here.

Top photo: Darlene Huntress (right), manager of field operations for No On One with her partner Melissa.