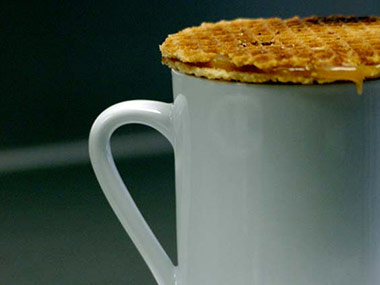 National holidays anywhere make fine times to salute ethnic foods made right here in Minnesota. Put April 30 on your calendar for Queen’s Day in the Netherlands.

We can celebrate by grabbing a locally made stroopwafel Dutch pastry. Janell Draper, proprietor of Proper People LLC in St. Paul, makes these delicacies that she calls Toffee Waffles.

Actually, stroopwafels are a perfect snack match with coffee any day of the year. It’s especially appropriate this Queen’s Day because Queen Beatrix, 75, will retire and pass the throne to son Willem-Alexander, who will become the Netherlands’ first king in 123 years.

Dutch cultural sites on the Internet believe Draper is among only five or six such entrepreneurs nationwide who make this special delicacy. Travelers—this traveler included—say Draper’s Toffee Waffles are equal to any stroopwafels made and sold by street vendors, airports and rail stations in Amsterdam, Rotterdam, and everywhere else in Holland where people gather, bike or stroll. Therein lies a problem.

Draper has reached near capacity in her ability to make stroopwafels using what is essentially street vendor technology. Married and with a pre-schooler at home, Draper started her home business a little more than two years ago. She delivers her toffee waffles to several metro area coffee shops and to retailers at the St. Paul Cheese Shop, Hampden Park Co-op and the Golden Fig, in St. Paul; and to Grassroots Gourmet, Local D’Lish and France 44 Cheese Shop in Minneapolis.

The idea for the business grew with her taste for good stroopwafels when, as a student at Bethel University, she did a Fall 2003 semester abroad at ancient University of Leiden in Holland.

Because stroopwafels are made fresh by vendors in the primary markets of Holland and northern Belgium, Draper can’t find a food industry equipment manufacturer in Europe or America currently making mid-size industrial griddles she would need to grow.

Designing and building such a useable kitchen device might make a fun project for engineering students at one of our colleges or universities. It might also be a legitimate project for Minnesota’s unique Agricultural Utilization and Research Institute (AURI) public-private research and development group since Draper uses primarily local ingredients.

We would all benefit from having more available Toffee Waffles from Proper People with our morning or afternoon coffee.