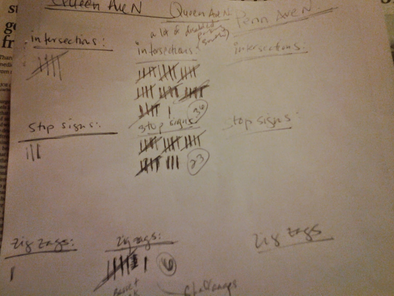 Today a fellow northside biker and I traversed the most likely alternative to a Penn Avenue bike lane, as we went from Highway 394 all the way up to 44th Avenue North.  We have both been regular attendees at the Penn Avenue Community Works meetings, but this was our first time actually going along the route.  While Penn presents its own set of challenges for bike lanes, Queen is far from an ideal alternative.

In fact, after this experience (in a car, so that we could more easily and quickly make an account of the corridor and because it’s February) I would push back to our policymakers and elected officials.  Either we’re serious about getting a north/south bike corridor somewhere between the proposed Humboldt/Irving Greenway and Theo Wirth, or we’re not.  If the political will and funding aren’t there to do it right (even on Queen, which in my book doesn’t meet the criteria) then tell us now and stop wasting everyone’s time.

If we ARE serious about biking amenities on the corridor, then the first question is…

…who are we building this bike trail FOR?  Are we putting it in for the casual cyclist who will only go a few blocks or are we gearing it towards the more avid bikers who are going longer distances?  Bear in mind that neither bike rider currently uses either street very much for either purpose, so statements such as “who uses it now? I don’t see any bikers on that street,” don’t favor one design over another.

The Queen Avenue or hybrid route could be utilized more by the casual biker, and the more fearless ones such as myself, biking longer distances, would be more likely to use Penn.  But assuming we go with the Queen Avenue option, here are some of the obstacles we noticed:

Between 394 and Bassett Creek, I actually yelled out in frustration, “I have no idea where I even AM!”  Queen and Oliver both start and stop and jump around so much that there’s almost no point in putting anything in on either street.  Russell or Penn are really the only options for the southernmost segment.

There are a total of thirty-six intersections between 394 and 44th, and twenty-three of them are configured so that a cyclist would have to stop at them.  And towards the south, there are a few blocks with handicap parking permitted spots in front of residents’ homes.  If we took parking away on Queen, we’d have to make sure that these folks could still have an accessible spot.

Which actually brings us to another question:  How extensive would the biking amenities on Queen be anyhow?  And if it involves taking parking away, do the residents affected support that?  If they don’t, and resident/business opposition was a driver in keeping bike lanes off Penn, how is that fair?

North of Bassett Creek, Queen only goes for six blocks, with some zigzags and stop signs, before hitting Olson Highway.  One wonders how safe the crossing would be there if vehicles are paying more attention to Penn.

The bike trail would later have to sidestep Willard Park at 16th or get right of way to go through.  A block and a half later, there’s another stop sign at Golden Valley Road, and two blocks after that would be the bicyclist version of Spaghetti Junction with Queen, McNair, Ferrant Place, 24th, and West Broadway.  Since I know the area well, I didn’t get lost.  But without serious infrastructure changes or wayfinding signs, your casual biker isn’t going to do so well.

North of Lowry, Cleveland Park and Lucy Laney School are the last obstacle requiring a change in route or right of way.  In between 34th Ave N and 44th, the stop signs were so frequent that I exclaimed, “I didn’t think it would be this BAD!” at least twice.  I know I repeated that phrase five times or more during the trip.

So the total was thirty-six intersections, twenty-three stop signs, six zigzags (two pretty easy jaunts half a block over, four requiring significant changes in the area or route), and five exclamations of how terrible it all was.

The easy solution to the stop sign issue is to switch the stop signs so that the east/west traffic doesn’t have the right of way.  But I wonder how that might impact vehicles leaving Penn and heading west.  More concerning from a bike safety standpoint, is what happens when drivers find out that they can zip along unobstructed one block over?  Now I’m on a narrow street with cars going 45 mph.  That feels a lot more dangerous than mixing it up with the Penn corridor.

The solution to THAT problem could be roundabouts, diverters, or other traffic calming measures.  But we’re back to wondering if there’s even a budget for that, much less support from the residents along the route.

And that brings me back to throwing down the gauntlet, or biking glove, again.  Either admit that biking along this route isn’t going to happen, or put it on Penn where it fits the easiest, or come up with the community support, a workable design, and a budget that makes it all happen.  If we don’t get this right, then eventually we’ll come to find out at the last minute that there won’t be biking amenities as part of the Penn Avenue project after all.