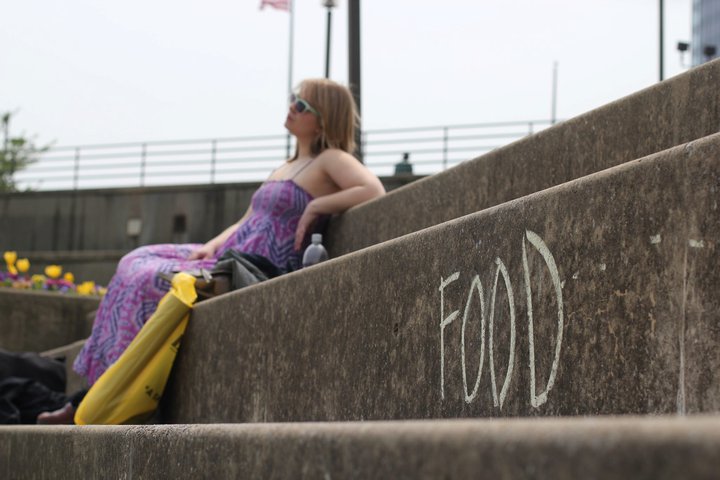 Name: Emily Weiss
Twitter: @piefingers
Website: “It’s sort of boring but my professional portfolio flavors.me/emilyweiss is much more updated than my personal site Piefinger.net, which is essentially defunct. You can find me on Twitter @Piefingers where I always feel like I should be talking about food, but I mostly talk about TV. I’d like to explain that I got the nickname Piefinger when I was working in a boxcar diner in Towanda, Pennsylvania. We baked like four or five fruit pies every morning and this older lady who was a regular—and very shrewd critic—came in, ordered a piece of peach blueberry, and demanded to know who made it. When I timidly admitted it was me, she carefully inspected my hands before declaring that I had ‘the pie finger.’ It was so weird and gross and begrudgingly complimentary that it stuck, but I regret it whenever I have to spell out my email address at a store register.”

What’s your job?
“I write the food and restaurants column The Dish for City Pages and regularly contribute pieces to The Growler. So beer and food, basically. It’s pretty great.”

Other than your job, what are your claims to fame?
“When I was like 10 I was in this show where I sang Christmas carols with John Denver. I had no idea who he was at the time, but I do remember that he was very nice to me and had impressive repartee with the Muppets. Oh, the show also had Muppets in it. Generic, off-brand Muppets. On the Internet people sometimes know me as the author of one piece of Baby-Sitters Club fanfic.”

Where are you most likely to be seen?
“According to Foursquare I’m constantly at Nordstrom Rack, which is true, and Ikea, because I recently moved. But as far as bars and whatnot, I go to Clubhouse Jäger a lot, especially when the patio is open; the Hexagon, because I need to defeat that claw machine; Republic at Seven Corners for trivia and really good beer selection; the Vegas Lounge for karaoke; and Icehouse for cocktails. I’m trying to become a regular at Adrian’s on Chicago. Beers are cheap and booths are plentiful.”

Where are you most likely not to be seen?
“Eh, I’m not above anything. I’ve been to Toby Keith’s. I love the waffle fries at Legends. I appreciate a bar that holds regular meat raffles. I do tend to sway the group away from anywhere that will be terribly crowded or impossible for them to park. I hate a situation where no matter what you do, you feel like you’re in someone’s way.”

With what person or people are you most likely to be seen?
“My boyfriend, people in bands, folks from Fargo, friends from high school and college, and the oldest person at the bar. Always.”

Where were you born?
“St. Paul, in the fine fine Midway neighborhood.”

What neighborhood do you live in now?
“Bancroft, but I’m a recent transplant from Longfellow.”

What’s your ride?
“I haven’t driven a car in almost nine years, and not even for a cool political reason. I do everything else though: walk, scrub rides—thanks everyone!—take cabs, and spend lots of time on public transit. When my nephews were little they referred to the city bus as ‘Emmy’s car.'”

What’s the best way for someone to start a conversation with you?
“Give me complicated criteria about a group you need to accommodate for dinner—one’s a vegan, it can’t be too expensive, my dad only drinks Scotch, etc.—and challenge me to recommend a restaurant that ticks all the boxes. Or ask me for directions, but only to a place I know so I can give them to you confidently. So…make me feel valuable, I guess? Well, that’s very sad and telling.”