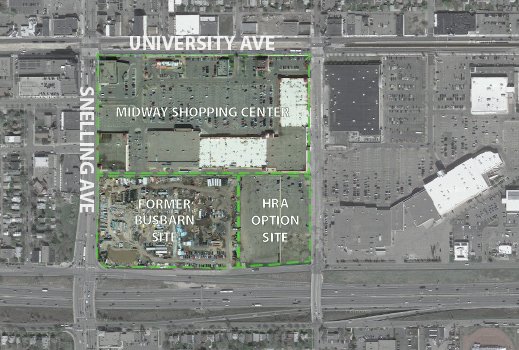 The Green Line LRT has brought many redevelopment projects to St. Paul. One such project site involves a parcel of land on Snelling Ave., just north of I-94, known as the Bus Barn site.

I look forward to a final site plan and community engagement on this project. But it is missing an opportunity to be truly innovative. I want the community, the city and the developers to think about something else. Freeway Caps (or lids). What if we added these along I-94?

I-94 divides many communities up and down its corridor. In Saint Paul, there is a clear divide from those who live on the north side of 94 from those who live on its south side. You’re not likely to cross the freeway by foot or bike, unless you absolutely have to. As someone who lives south of 94, I can attest to this. Crossing the freeway, with the exception of the Griggs and Chatsworth bridges, is a pretty daunting task—narrow sidewalks, speeding traffic, windy, dirty and generally unfriendly to pedestrian and bike traffic.

As Saint Paul works on its mission to be the most ‘Livable City in America’, we need to look at other cities for inspiration: how about Florence, Italy?

Ok, ok, a little too far away? How about something closer to home? How about Dallas, TX? Columbus, Ohio? or Chicago, Illinois? Or even Minneapolis?

Freeway caps/lids are based on the Ponte Vecchio in Florence, Italy. Most freeway caps are usually turned into parks, but many cities are starting to use them for added office, retail and restaurant space.

Columbus constructed its freeway cap over I-670 to connect it’s downtown with the Short North neighborhood. Chicago is looking at covering three blocks of the Kennedy Expressway and building an office complex and a park. There are many other cities that are looking at doing this or have already done a cap. Recently, students at the ‘U’ came up with a plan to cover I-35 that would include business, retail and park space.

Saint Paul should look at building a freeway cap or lid over 94 at Snelling Ave to Pascal St. This would link the north and south side of 94, connecting a residential neighborhood with mixed use and business areas. State, local and private partnership financing could also be on the table because of the project’s transformative economic potential.

With new development on Snelling and Selby underway and the eventual redevelopment north of 94 toward University, freeway caps would help ensure more foot-powered traffic through a much longer stretch of Snelling, maximizing economic and environmental impacts.

Is the City ready to be that innovative?