After a successful pilot program in South Minneapolis and a Hennepin County resolution calling for it, Minneapolis residents may be able to participate in curbside organics waste recycling in about a year. At a presentation to the Transportation and Public Works Committee March 18 staff recommended a citywide program similar to the city’s organics pilot program.

“We favor the opt-in model,” said Minneapolis’ Solid Waste and Recycling Director David Herberholz “Participants would be the ones that expressed interest. Eventually we hope more and more would join. Ideally, everyone would participate.”

In the name of reducing the flow of organic waste to burners and landfills, residents would see an increase in their refuse bills of between $2.38 and $3.25 per month, according to the staff report. The fees, along with State Select Committee On Recycling and Environment (SCORE) funding that is passed to Minneapolis through Hennepin County, would pay for 64-gallon organics carts and ongoing expenses related to pick up.

“The only way we’re going to get it done economically is if everyone is paying the base fee,” said Herberholz. “For some that feel they could do it, it could be a wash.” Organic recycling participants could save $3 a month by using a smaller garbage cart.

Herberholz says the recommendation will be discussed at a City Council Study Session, probably in April.

“I think it’s a wonderful idea and the direction we need to go if we’re trying to get to a zero-waste structure. It’s just a matter of putting the pieces together to get something in place,” said Third Ward Council Member Jacob Frey.

Five percent of the city’s solid waste and recycling customers are participating in the curbside organics recycling pilot program that started in 2008. Each participating household has been composting an average of 388 pounds of organics per year.

“From an environmental standpoint, we need to reduce our carbon footprint and reduce the amount of waste that is being burned or going to landfills. Zero-waste is like the pinnacle of environmental sustainability,” said Frey. “I think Minneapolis can become one of the most, if not the most en vironmentally sustainable cities in the country.”

Hennepin County thinks organics recycling is a good idea too. In February the Hennepin County Board of Commissioners withdrew a controversial request to the City of Minneapolis to burn more waste at the Hennepin Energy Recovery Center (HERC). The downtown Minneapolis facility burns 365,000 tons of garbage each year, which generates energy as an alternative to landfilling. Alternatively, the County is asking its cities to implement organics recycling programs. According to the resolution, Minneapolis should have a program in place by Jan. 1, 2015.

“We have goals that we want to meet with recycling and we believe we can do that if we add organics recycling,” said McNary. “It’s our hope that Minneapolis will have it in place by January. We would have to decide what the consequences would be. There will be a series of meetings with Minneapolis to discuss their plans and evaluate progress. I’m not insinuating that they would lose all the SCORE funding if they don’t make it, but that is one option.”

McNary said the County is lobbying the State Legislature to at least double the amount of SCORE money available for Hennepin County cities. “We’re hoping that this Legislative session some bill would be passed,” he said. “We’re trying to help the cities funding wise.”

Herberholz said that while the city is supportive of “any program that can divert more waste away from processing facilities and the landfill,” he doesn’t think it’s realistic that the City will meet the County’s Jan. 1 deadline. “We don’t favor doing implementation during severe winter months,” said Herberholz, “I think the idea is it would happen next spring.” He estimates that getting carts would take about five months and getting trucks could take eight months. Herberholz said the City has quarterly meetings with County staff and sees flexibility in the deadline. “We’re on the same page. As long as we keep that open communication, both of our desires will be met.”

DeVon Nolen, a North Minneapolis resident and food justice activist, says she thinks the time for organics recycling is right. “I do think people are ready. Minnesota and Minneapolis in particular are trailblazers with things that have to do with food. It’s on people’s radar, but they may be looking for guidance and leadership from our government. Implementing a program like this would be a step in that direction.”

Nolen said she would also like to see a program for larger facilities, especially those that have food service. “If you look at the West Broadway Corridor, you have the District Office building and churches, where you have a few hundred people through there at a time. It would be nice to see some of the larger institutions participate.”

Minneapolis began a residential organics recycling pilot program in the Linden Hills Neighborhood after a grass roots group of residents decided they wanted to do something about climate change and requested curbside compost collection. The city approved a pilot program in September 2008.

“They called themselves Linden Hills Power and Light (http://www.lhpowerandlight.org/) and did a little research on what might be the best way to have an impact on a neighborhood level,” said Power and Light Executive Director Felicity Britton. “They expected maybe using renewables like solar, or maybe white roofs, transportation or some new carbon sucking technology, but what they found was that the most bang for the buck could be had by focusing on waste, particularly by taking methane generating material out of the waste stream and composting it.” 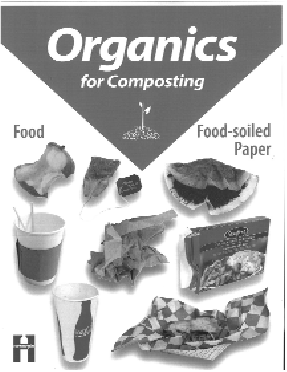 The pilot program has expanded to the East Calhoun neighborhood and parts of the Cooper, Hiawatha, Howe, Longfellow, Phillips and Seward neighborhoods, where a combined 45 percent of household chose to participate, according Herberholz. Participation per neighborhood varies from 30 percent to 53 percent. Neighborhoods invited to participate are all in the same part of the city because they are on the same route, he said.

The organic waste is collected in partnership with Hennepin County, which subsidizes the $15 per ton tipping fee at the Hennepin County and Brooklyn Park Transfer Station. The waste is then trucked out of the county to Specialized Environmental Technologies, which uses the organics to increase the productivity of soils for planting efforts.

The city has looked at the effectiveness of the pilot program and has considered opt-in and opt-out programs, different methods for collection, and drop-off sites, said Herberholz. The City Council commissioned a study of the pilot, which was completed in October 2013. To view the report, which says organic materials make up as much as 32 percent of what Minnesota residents throw away, visit http://www.ci.minneapolis.mn.us/solid-waste/about/WCMS1P-116556.

“We’ve come quite a long way throughout the last year on one-sort recycling,” said Herberholz. “That’s really boosted the diversion of a lot of waste out of the landfill stream. The next step is to look at what’s going to the garbage stream, and a lot of what would be left is organics. The difficulty for me is how to keep the expenses down. There are a lot of variables that need to be discussed.”

Minneapolis contracts with Minneapolis Refuse Incorporated (MRI) to collect garbage in half of the city and collects the other half in-house, an arrangement that would carry forward to organics, according to Herberholz. His staff anticipates the City would need 11 trucks to collect organics and MRI would need 10 trucks.

One-time costs for organics recycling, according to the report, include $2.7 million for 60,000 carts (50,000 organics carts and 10,000 small garbage carts), $2.5 million for 11 trucks, and an unknown amount for modifications to the truck storage facility. Ongoing annual costs would include $1.5 million for 21 full-time staff, $2 million for MRI expenses, and an unknown amount for vehicle maintenance. Staff would include 18 drivers (including two floaters), a mechanic, a cart maintenance staff person and a supervisor.

Herberholz estimates that the City would save about $80,000 per year in tipping fees for the 7,913 tons of organic waste diverted from HERC.

Britton said she considers the pilot a success not only because of the high rate of participation in her neighborhood but, “based on how enthusiastic people are about it and how excited they get about how little trash they have.”

“Most families of four have less than a grocery bag of trash per week once all the compostable items and recyclables are diverted to the green and blue carts,” said Britton. “Many have downsized their black trash carts to the 26 gallon size because they no longer need a 96 gallon cart.”

Frey said he’s heard good things. “We haven’t had very many public meetings yet, but the people I have spoken about it with have been very favorable.” One question he has is whether organics recycling should be run by the government or contracted out to a private business. “If it’s contracted out, how do we create a regulatory framework for them to operate?”

Rick Bonlender, Co-Chair of the Linden Hills Environmental and Sustainability Committee said he would like to see even higher participation in his neighborhood, which already has over 50 percent participation. “We plan to do more promoting this summer.” He said he’d like to see neighborhoods with the highest participation receive free loads of finished compost that program participants could use in their gardens. “Gardeners love the idea and those who have tried composting at home but have stopped are generally easy to enroll,” said Bonlender.

Britton said she would like to see more backyard recycling, to avoid the use of trucks, but is excited about the idea of a citywide program. “It’s the cheapest way we can impact climate change. When compared to a high efficiency furnace/boiler (approximately $3,000), home insulation (approximately $3,000 after rebates) or an electric car ($30,000+) curbside composting is much more affordable for most families at less than $50 per year.”

The benefits of organics recycling, according to Britton, include:

“Composting might not be glamorous, but when you add all these things together, it’s an impactful thing we can do as a community,” said Britton. “Neighbors helped neighbors sign up for the green carts, and taught each other what went in it. We wanted it to be a community building activity where we were all joining together to have an impact.”