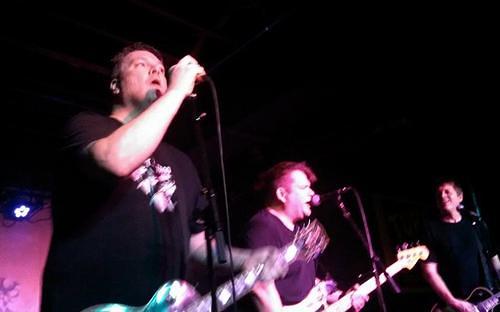 This week I went to two nights of local music at the Turf Club—both sold out! A great sign for the Turf Club and Twin Cities audience appreciation of homegrown music. Wednesday night was all country (Cactus Blossoms and Erik Koskinen); Friday night was punk all night. It was also a 10 year anniversary party for Ben and Sheela. I don’t know them but I want to thank them for a great night. What a fun and generous way to celebrate.

The night was so good I didn’t take enough notes—but it was the best two hours of dancing I’ve had in a year so I’m not even going to feel guilty, just share my quick impressions. Dillinger Four headlined. They cranked it out in a really good way. Coming back for a great encore. It’s been a long time since I’ve seen them out of the Triple Rock Social Club; Turf Club has more room for dancing near the stage. I could listen to Patrick Costello for a long time; he has the under-stated humor on Patton Oswalt. Add that to some amazing musical speed and I’m sold.

Pink Mink played some old favorites and songs I didn’t know. Christy Hunt and Arzu Gokcen have some of the best stage presence in the Cities. It’s great to see women rock and they are both so good. (The rest of the band is great too—but for better or for worse women on stage is still noteworthy.) All day I’ve been singing Chains, based on their cover of The Cookies, which is better known as a cover by The Beatles. A good show always leaves you singing some song the next day!

The night started with NO SKIN and Whatever Forever; together a kind of funny retrospective of punk-ish music from the 80s and 90s. NO SKIN reminded me of bands I saw in church basements or Chuck E Cheese as a kid. (Back in the day Chuck E Cheese used to book night gigs.) Lots of screaming and short songs – punk. Whatever Forever fit the 90s mold with a more refined, decidedly upbeat sound. Gotta love a band with a girl singer. If I ruled Whatever Forever, I’d have Clara Sayler sing even more.