Dave Barry was a kid when the Soviet craft sputnik was launched, sending out a “bleep” through low orbit all around the world. His teacher intoned to the math class that, “From now on, you kids are going to have to learn a lot more about math and science.” Barry added, “As if it was all our fault.”

People around the world are going to have to learn a lot more about economics and banking. This time, however, it really is our own fault. If we’re going to get some control over our lives in something like a democracy we better get moving. Movements like “Occupy Everything!” are a start, but there has to be a lot more attention and education. Fortunately, we have people like David McWilliams and his “Punk Economics” to help – teaching what’s going on with more than a little fun. 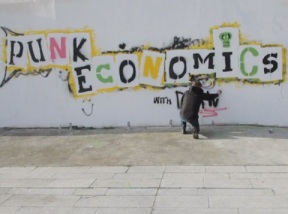 McWilliams is an Irish economist, writer, and snappy wise guy who makes a great guest on a teevee gab show. He started his video series “Punk Economics” to fire up opposition to what he thinks is a very wrong-headed move by the European Union to contain the debt crisis. If you have 20 minutes to watch some great viddy, here is Part 1, followed closely by Part 2. There will likely be more.

“Punk Economics” is “based on the central idea that what is important is not complicated and what is complicated is never important.” That’s pushing it, but there is no doubt that economics and central banking can be made to be far more complicated and technical than it needs to be when big institutions are trying to get away with something.

In this case, the European Union is becoming a “bankocracy” where a model based on something like a Dickensian debtor’s prison is being used to punish, not help, the nations that went on a borrowing spree over the last 10 years. The problem is all about socialized risk – for banks. The European Central Bank did, in fact, finally print a trillion Euros as we all knew they would – but sent it out to help the banks strangle the “bad” nations of the Eurozone. McWilliams himself sees no problem with an end to the Euro if those are the terms of union.

McWilliams’ style is as light and fun as you would expect for an Irishman, but more importantly it has to be this way. What’s going on in Europe is something that many people know in their guts is just wrong – but they don’t know exactly why. Punk Economics bubbles that feeling up into the brain, hopefully fueling the feet and arms into action along the way.

Why is it “Punk Economics”? It’s a folk movement, with attitude. It’s about people getting a handle on the union that promised all kinds of brotherhood and prosperity across the continent. It’s the next stage of a revolution – one started by well meaning liberals (in the classic sense of the word) who pretty much pitched and folded when times got bad. It’s pretty much how reform movements always wind up when they get too far ahead of the people and bogged down in bureaucracy and detail.

This isn’t the only attempt at explaining this stuff with good humor, of course. Here in the USofA we have the “Daily Show” and many small efforts like Barataria. The difference is that those of us reporting on the constant ebb and flow of nooze don’t have a single message put together in one package. I would like blatantly steal, er, be inspired by this presentation to start something like this if you all are ready for me to jump into video. Someone has to take a look at the big picture.

“What is important is not complicated and what is complicated is never important.” We’re all going to have to learn a lot more about how to run banks and economies in the next few years. Anyone who wants to throw you out of a conversation can drown you in a zillion details. What matters is when everyone knows there is a real threat to everything we believe in circling the globe. Once it was the “bleep” of a Soviet spacecraft, today it’s the web of debt working tighter around our necks.

We’ll get through this – with a little more smarts. But we have to get up to speed on what counts fast. Thanks, McWilliams!