The Hennepin County Board’s approval last week of enhancements to the upcoming Target Field Station, including a public plaza and amphitheater, green space, and retail, is a solid step forward for the Twin Cities and for transit in Minnesota. This project opening next year has the potential not only to materially enhance public space in Minneapolis, but to contribute to an ever more positive outlook in Minnesota about transit’s role in the city and about public space’s relationship to transit.

Ways for people to move and places for people to gather are keys to a more connected and coherent community, and they catalyze each other, each making the other one more valuable. 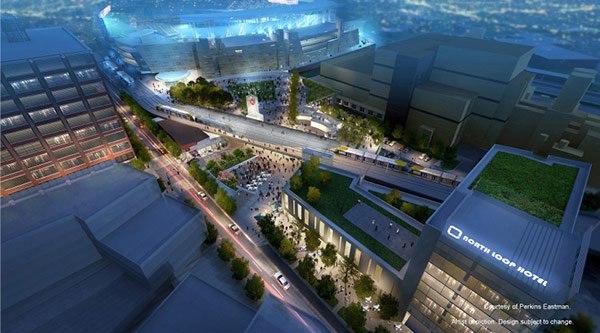 Although Minnesota Twins president Dave St. Peter invited some skepticism in a recent Star Tribune article by ambitiously calling the new project a Minnesota equivalent of Grand Central Terminal in New York, Target Field Station doesn’t have to match Grand Central’s decades-long history and tremendous scale to be a real strength for the Twin Cities.

The cleanly-designed plaza and amphitheater make the area attractive and versatile for both organized events, like concerts and festivals, and simply free-form gathering and activity. Access to Metro Transit buses, the existing Blue Line and upcoming Green Line across to St. Paul, Northstar commuter rail, and future light rail lines like the Southwest Corridor will tie the Target Field Station area into the city and the greater metro, which is indispensable for making it a truly public space. That role for transit is what can make this project not just neighborhood-oriented and a boon to the Twins organization, but metro-oriented and an opportunity for the whole metro.

Perhaps even more importantly, realizing this project can help show how powerful it really is to connect and coordinate between public space and transit around Minnesota. Along with the upcoming project to revitalize Nicollet Mall (which we’ll talk about in this space later this week, following a public presentation at the Guthrie of the three finalists’ designs), the expanded Target Field Station project is a gratifying sign of energy and creativity used to grow and improve public places for the Twin Cities, and to connect them with the people who will use them.