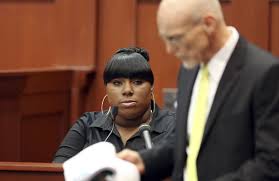 Rachel Jeantel, friend of Trayvon Martin, testifying as a witness during the George Zimmerman Trial.

Last week, while watching the George Zimmerman murder trial, I was struck by the ways in which race, racism, and socio-economic status continue to play a key role in determining who lives and who dies and who has value and who is perceived as having little value in our society. The fact that in this day and age an African American boy could be targeted for “walking while Black” speaks volumes about the undercurrent of hazardous race relations that are ever-present, yet hidden, until an explosive situation occurs that reminds us of its clandestine and shameful existence.

If anyone is under the illusion that race is no longer an issue, then one should look no further than Rachel Jeantel, and America’s response to her appearance in the George Zimmerman murder trial. Indeed, Rachel Jeantel is a 19 year old high school student, a friend of Trayvon Martin who happened to be the last person he spoke to before he was killed, and the star witness for the prosecution in this case.

As a teenager, thrust into the middle of arguably one of the greatest controversies of this decade, it is not hard to imagine why Rachel Jeantel would be reluctant to come forward as a witness. Add to this the fact that she is Black (of Haitian and Dominican descent), full-figured, dark-skinned, female, ostensibly from a lower socio-economic class, and has a strong personality, and it is very easy to see why she would feel less than comfortable about being in a spotlight that historically has been unfavorable to and unforgiving of people who fit Rachel Jeantel’s profile.

It is clear from all the buzz, Twitter feeds, harsh and demeaning commentary from the talking heads and media pundits, that America is not ready for young women like Rachel Jeantel and may lack understanding about what it means to be young, Black, and low income in this country. I was struck while watching the commentators on the major networks by how mystified and perplexed they were by Rachel Jeantel, her demeanor in the courtroom, and her rationale for her actions following the murder of her friend, Trayvon. I watched in horror as they commented on her level of intelligence, whether she spoke the King’s English, whether she could be trusted, and whether she was taking the trial seriously.

As I watched all of the backlash and nasty attacks against Rachel Jeantel, I had to keep reminding myself that she is not the criminal here. She is actually the victim in this case, yet she is being treated like a criminal, demeaned, marginalized, teased, scrutinized, and being made to feel less than human. One commentator even went so far as to say that Rachel Jeantel’s inability to read cursive as a senior in high school is a parenting issue and it has nothing to do with the color of her skin. Such a comment belies the fact that she speaks Spanish, and Haitian Creole, as well as English. In order to survive she has had to navigate multiple cultures, customs, and generational norms, all while living on the fringes of a society that is not welcoming to her because of what she represents.

Regardless of whether those riding the ‘backlash bandwagon’ will admit it, the negative response to Rachel Jeantel has a great deal to do with her position at the intersection of race and class in America. It is not a stretch for one to hypothesize that if Rachel Jeantel had lighter hair, a lighter eye color, lighter skin, a slimmer build, and speech patterns and cultural norms closer to the comfort level of mainstream White America, there is no doubt that she would have received a different type of reception than the baptism by fire with which she has been forced to contend. I am proud of Rachel Jeantel for being true to herself and having the courage as a beautiful Black woman to face the naysayers, the attorneys, the judge, and the jury to speak her truth. Through her boldness and authenticity, she served as a voice for her peers, who sadly are rarely given the opportunity to speak and participate in mainstream society.

Rachel Jeantel deserves to be able to move on in peace from this most unfortunate circumstance and to have the chance at a normal life. She should not have to suffer the consequences of our failure to honestly deal with the issue of race and the lingering economic oppression and marginalization being experienced by people of color in our society. Thus, it is my hope that the jury in this case will have the wisdom to look beyond the smoke and mirrors and all of the chatter and focus on the underlying reasons why Trayvon Martin was targeted and ultimately killed. No matter how we try to get around it, race still matters in this country but hopefully, so does justice.

Nekima Levy-Pounds is a professor at the University of St. Thomas School of Law and the Director of the Community Justice Project, a civil rights legal clinic. Levy-Pounds is the author of numerous scholarly articles focusing on issues at the intersection of race, poverty, and the criminal justice system.

The views contained in this post are soleley those of the author. Nekima Levy-Pounds may be reached at https://twitter.com/nvlevy.