It’s no secret the energy fueling our nation comes at a heavy cost to the environment and human health. What we don’t talk about is that a good portion of our domestic energy and other vital resource procurement occurs on publicly owned land.

Indeed, in the last 10 years, between 27% and 36% of fossil fuel sales’ production came from federal land. Last year, this equated to 17,129 trillion Btu of energy. This includes primary energy obtained from fracking, traditional gas and oil drilling, and off-shore drilling on the Outer Continental Shelf.

Though these activities contribute to the economy, another way to look at it is publicly owned lands are used for processes that contribute directly and indirectly to climate change, ecosystem destruction, pollution, costly spills, and other negative externalities that cost the American taxpayer. There is a modest offset—royalties or rent private enterprises pay for the rights to extract the fuels on public land. Currently a state and the feds split the money 50-50 for onshore activities and 37.5-62.5 for offshore activities. A state’s portion, at least in part, is supposed to cover lost revenues from federal land that is not taxable by the state.

The Federal portion from the Outer Continental Shelf in particular, goes to the Land and Water Conservation Fund (LWCF) to protect Federal and State public parks and wild spaces. This includes maintaining Minnesota’s natural treasures including the Chippewa and Superior National Forests. However, of the $900 million authorized, only about 1/3 is spent toward conservation, with the rest of the funds regularly diverted to the treasury by Congress for non-conservation related items.

Unfortunately, a bill introduced in 2013 seeks to change the way revenue from Outer Continental Shelf activities is distributes, threatening to decrease LWCF funding even further. 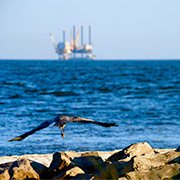 According to a report released by the Center for American Progress, the Fixing America’s Inequities with Revenues (FAIR) Act seeks to bring into parity the payments received by the Gulf Coast states from offshore activities with those with onshore Federal land activities. Though at face value, this seems reasonable and fair as the bill name implies, the report argues otherwise. Since offshore Federal submerged land does not diminish State taxable land, diverting additional revenue to specific states at the cost of increasing the debt by an estimated $49 billion by 2040 isn’t really settling an inequity nor is it fair to U.S. taxpayers.

What does this mean for Minnesotans, over a thousand miles away from the Gulf? Reallocating funds to these states will redirect 50% of the direct payments now going to the Land and Water Conservation Fund to four coastal states, meaning that all states, including Minnesota, could see even fewer state and federal park dollars if the bill becomes law.

If we allow private entities to drill, mine, and forest our public lands, posing environmental externalities and degradation that impact the very people who own that land, shouldn’t we be using that revenue to protect and conserve the environment? Apparently, economic gains are the only endgame in Congress’s mind.

Though Minnesota does not currently have oil or natural gas exploration or extraction on State or Federal land, these lands are currently host to other private activities—including pipelines—with negative environmental consequences. Next week’s blog will look at Minnesota’s public land and what happens to revenues coming out of royalties and rent paid by private companies using the land for mining, logging, and other economic activities.