Public Functionary (PF), the art gallery based in Northeast Minneapolis, will be hosting a weekend-long installation celebrating MayDay’s 40 years for Art-A-Whirl along with with In the Heart of the Beast Puppet and Mask Theater. The installation offers a chance to take a look at the puppets taken from festivals used in the early days as well as more recent ones up close. It also serves as a cross-reference of the two art-related neighborhood festivals: Art-A-Whirl and MayDay, both of which act as harbingers of spring, according to PF director Tricia Khutoretsky. 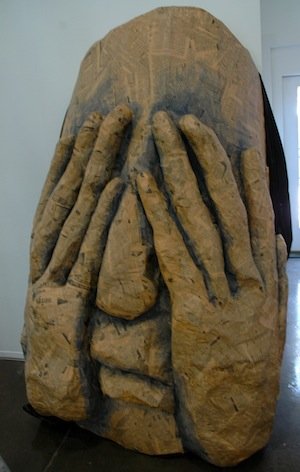 Being a part of the Northeast Minneapolis arts community, Khoturetsky says that her thought with featuring the MayDay Festival during Art-A-Whirl was a way to show an example of what Art-A-Whirl could be. “There’s such a negative attitude around Art-A-Whirl,” she said. “It doesn’t need to be so serious.” Art-A-Whirl, which began in the 1990s, began as an art studio crawl, but over the years has grown to be a much larger festival, encompassing events, performances, music and more. These days, with so many other opportunities throughout the year to visit artist studios, Khoturetsky hopes the community can let go a little bit about pre-conceived notions of what Art-A-Whirl should be, and embrace it for the community event that it is.

MayDay, Khoturetsky says, has managed to maintain its identity as a community celebration. “Let’s look at MayDay as an example,” she said. “What we have in Northeast Minneapolis is just as special as what MayDay is to South Minneapolis.”

Unlike the large-scale exhibition featuring In the Heart of the Beast at the Weismann Art Museum in 1998, Khoturetsky sees the retrospective at Public Functionary more as an interactive installation, rather than a historical exhibition. Though there will be some text, archival photographs and video and posters from nearly all of the years, the main focus will be on being able to walk through the space filled with HOBT’s gigantic puppets, offering a chance to wonder at the unique style and power the puppets have.

The MayDay Parade and Festival first began in 1975, two weeks after the end of the Vietnam War. Originally conceived as a positive-energy act that served as an alternative way to protest the war by bringing people together in a healthy community, it ended up being a celebration of the war’s end. At the time, the organization holding the festival was called the Powderhorn Puppet Players, founded by David O’Fallon and Ray St. Clair, which eventually changed its name to In the Heart of the Beast Puppet and Mask Theatre.

According to Sandy Spieler, Artistic Director of HOBT, the original MayDay Parade was a collaboration with organizations such as the Almond Tree Household, The New American Movement, and the Street Artist’s Guild. In writing about that first festival, she said that that first event had music from two accordians, plus 100 particpants carrying banners, an Earth puppet, a water puppet and several birds. “When we reached the park we raised a puppet May Pole,” she wrote. “There were picnics, some political speeches, and several small performances. Many got sunburned and it rained really hard that night.”

Spieler says celebrating the 40th Anniversary of May Day this year was wonderful. “I had the deepest open heart that I have ever felt,” she said. “Just seeing how many people came to the workshops and the day itself, I was really filled with the joy.” Spieler said she particularly felt the presence of community members “who are no longer in the circle with us” as well as the multiple generations represented in the festival- from the youngest participants, to those who have grown up with MayDay, and those who have been coming since the very beginning. 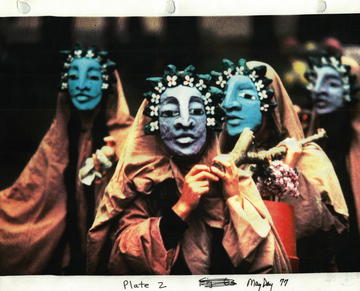 At this year’s Tree of Life Ceremony, which happens at Powderhorn Park after the Parade, Spieler said one of the best moments was Dan Nixon was singing Everyday People. “When the sun came across to raise the Tree of Life—it wouldn’t raise,” Spieler said. “It was wrapped in plastic. All the people had to join in lines through the audience and the audience had to raise the tree. It was a fitting action for 40 years.”

Check out the storify below for some great pictures, videos and tweets from this year’s festival. Also check out Dixie Treichel’s radio documentary of the festival here.