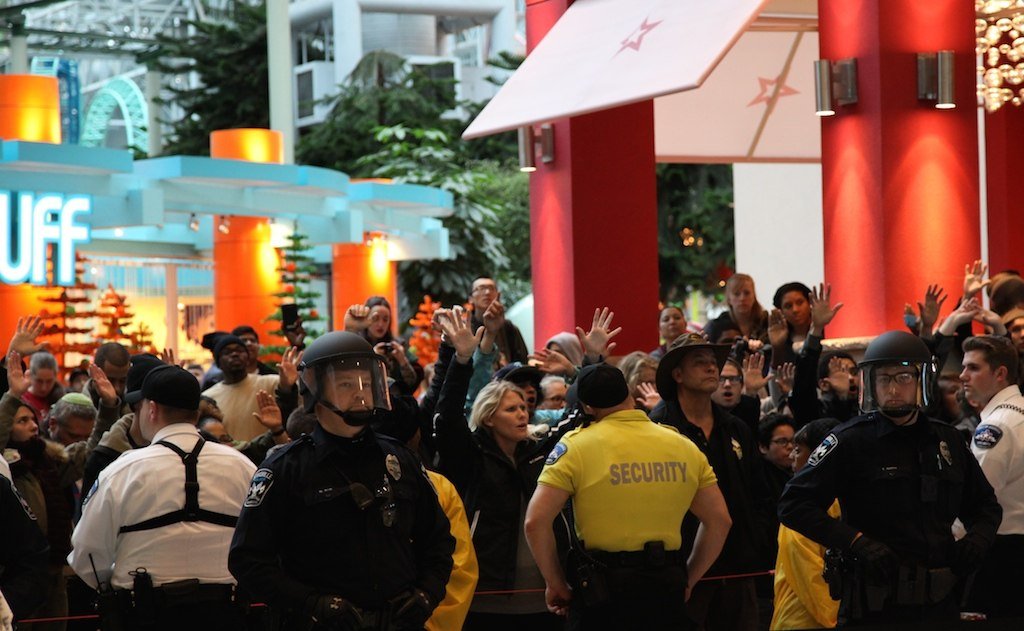 Two years ago, I attended one of the most amazing acts of public expression I think I’ve ever experienced. It was at the Mall of America- a Round Dance held in the rotunda where I witnessed over a thousand people, mostly Native American, sing and dance in a circle as drums played. Not a protest, exactly, it was really more of a healing prayer and a call to action, precipitated by the Idle No More Movement, which got started in Canada over tribal sovereignty issues.

I’m not exactly why the 2012 roundy was allowed to occur by MOA security without a hitch when in the following year, a similar action was nipped in the bud. Last year, I reported for The Uptake how Idle No More organizers received letters not to attend a planned action, and were arrested upon arrival. The protest did not take place.

It’s possible the 2012 round dance was given prior permission while the 2013 one didn’t. Or the mall simply wasn’t aware that the first one was going to take place and were taken unawares.

Regardless, they certainly had a specific protocol in response to the planned Black Lives Matter protest held this year on December 20th, filled with intimidating letters to the organizers, coordination with the Bloomington police department and the City Attorney as well as other law enforcement agencies from surrounding agencies.

Still, the protest did take place, despite MOA’s assertions that it was private property and the protest wasn’t welcome. My feeling is that it’s a shame they took that stance, when they could have chosen to let it occur without resistance, as what happened in 2012. In that case, what I witnessed was a very positive incident of song and public expression where shoppers actually were provided with an extraordinary experience, even if they just happened upon it.

Just because you’re a corporation doesn’t mean you have to necessarily be against speaking out against injustice. In one of the most heartening displays during the Black Lives Protest, staff of LUSH cosmetics stood in solidarity with the protesters. Whether or not this was a sanctioned gesture by their corporate headquarters, it was a fabulous branding opportunity for the store as a place that actually cares about social justice.

MOA stands on pretty litigated ground in its assertion that the mall is indeed private property. But I tend to side with Attorney Larry Leventhal, who won a case in 1997 on the grounds that a group of animal rights activist had a right to free speech at the MOA, though that decision was overturned by a higher court. In an interview, Leventhal reflected that he still believes he was right in that case. “That mall’s basically surplanting town squares,” he said, especially given the amount of public dollars the MOA has received.

One of the reasons I’m so interested in the “public-ness” of the Mall of America has to do with another piece of property that seems ripe for controversy in the very near future: the new “park” downtown that will be controlled by Vikings for 80 days out of the year. As explained in MinnPost, the land that will be acquired by the City Minneapolis as part of the publicly funded Vikings deal will then be sold to the Minneapolis Park and Recreation Board (for zero dollars) who will lease the land back to Minneapolis for 30 years (with a 20 year extension) at no cost with the possibility that the city could sub-lease the land to a nonprofit entity. So it’s a park, but it sure doesn’t sound like a public park to me.

But that’s not the only questionable “public space” in the works. A new light rail station in development for Lake Street and Hiawatha Avenue has drawn controversy because the mixed-use plan for the county-owned development that would include residential spaces, a county office, off-street parking stalls and a public plaza and market place wouldn’t be accessible for the public in the way it’s currently planned out. “The Committee asked the architects and Noonan, who is the county representative, to build in assurances that the public can clearly tell they have access to the walkways being proposed through the private property portions,” reports Kristen Leigh Painter in The Star Tribune, “to ensure that the public plaza has a visual connection with Lake Street foot traffic and to work closely with the city in selecting simpler building materials.”

As more of these hybrid public/private spaces are planned and developed, I think we as a public need to be watchful. This is not just for protests but for other civil liberties as well- the right to walk or stand in a location, for example, without fear of being picked up for loitering. It even becomes an issue for journalists as well. In anticipation of Saturday’s event, I spoke with communications staff at the MOA to find out that press were only “allowed” to watch the protest from the fourth level balcony of the rotunda. That severely limits a journalist’s ability to report on a story- not to mention get decent footage. Will the future Vikings park have similar caveats to the “public” part of the public park? Let’s hope not.