“If they want to take Monique out of her home they’ll have to take me with her!” With these words protestor Nick Espinosa summed up OccupyMN’s new direction: the protest group has occupied a foreclosed home to prevent its residents from being evicted.

On November 8, about 60 people rallied at the home of Monique White in the McKinley neighborhood of North Minneapolis. U.S. Bank which owns White’s mortgage foreclosed on her home after she became later in her payments. White is now facing eviction.

Most of the group was from OccupyMN, and they set up tents and banners and marched for several blocks. Protestors say they will stay in the home and tents on the lawn until U.S. Bank renegotiates White’s mortgage. If sheriff’s deputies try to force an eviction, the protestors plan to resist it.

Ben Egerman of OccupyMN said that they are occupying the home “to stand in support and solidarity with the homeowner,” and “to make it more inconvenient when the sheriff comes to evict her.” He said they also want to draw attention to the foreclosure crisis, demand a moratorium on foreclosures, and demand that US Bank negotiate with its customers. He added that OccupyMN hopes to occupy other foreclosed homes.

A single mother, White bought her home in 2003 and lives there with her two sons. She works part time in a liquor store but lost her other job. She had worked as a youth counselor at a group home but her organization faced budget cuts and she lost that job in February of last year. Then she missed two house payments and pretty soon she got a call from U.S. Bank saying her home was going into foreclosure. 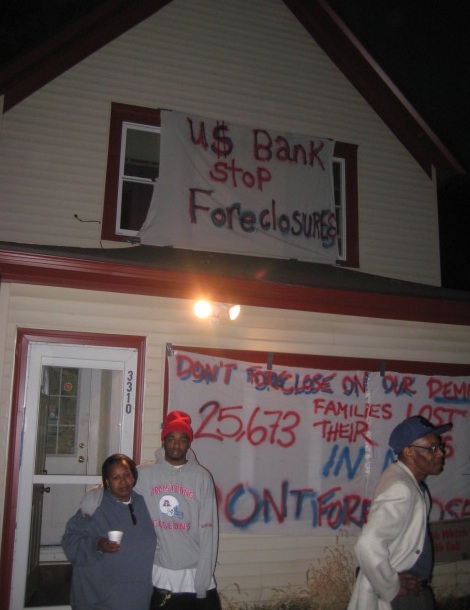 White said she pursued several alternatives to prevent the foreclosure. She said her stepfather signed an agreement to assume some responsibility for her mortgage, she wrote a hardship letter and sent it to US Bank, and she tried to get into a program that helped homeowners modify mortgage payments so people could stay in their homes. “So I went through all that,” she said, “we faxed papers, we mailed papers, and they said they didn’t receive them.”

Then at the end of October, White found out her house had been sold. “It got cold in here one night. The next morning I called the gas company to have them light my furnace. The billing department told me that Century 21 (the real estate agency) had called them and told them they’d be the realtors for the house.” So White called U.S. Bank and found out that as of January 26, 2011 her house was sold. “I didn’t find out until October 24,” White said, “I just feel betrayed. I feel like US Bank strung me along until the redemption period ran out and then they stole my house out from under me.”

Now, she says she is going to inform U.S. Bank that she is seeking legal advice and hope they come to the table. She wants to renegotiate her mortgage so that she is able to make the payments and stay in her home. To get more help she reached out in new directions. She got in touch with OccupyMN, went to its general assembly, and found people willing to lend her a hand.

When contacted by the Daily Planet, a U.S. Bank spokesperson said they could not discuss the case without written permission from the customer, but added:

I can say that I am familiar with this matter and that our records show that we acted appropriately.

The customer’s loan was sold to Freddie Mac in 2005. Once that happened, we, as the servicer, were required to follow Freddie’s guidelines. Per those guidelines, the house was foreclosed on in January 2011.

OccupyMN had considered occupying foreclosed homes as a way of demonstrating against foreclosures and continue their demonstration through the winter. Egerman said that White was the first owner of a foreclosed home to offer to her home. “It’s a big commitment to let people come stay with you 24/7. The fact that she was willing to do so made it an easy decision.”

People involved in OccupyMN say that they hope to occupy more foreclosed homes and perhaps get pursue other, new protest strategies and hope that groups in other areas occupy foreclosed homes. Speaking at an OccupyMN rally in Government Plaza on November 8, Randall Cohn said, “I suggest the best possibilities do not exist here. The best possibilities lie out in the communities.” He added, “We need to occupy [foreclosed] homes all across the country.”

White also hopes that the idea catches on. She said she’s never been one to speak up, but now hopes to tell her story to more people. “I hope I’m not the only person that this works for,” said White.

White may get to tell her story. Steve Fletcher, an organizer a non-profit that works with people going through foreclosure, said that if people are in White’s situation and are interested in contacting the occupiers, they should come down to the occupation at 3310 6th Street North, Minneapolis.