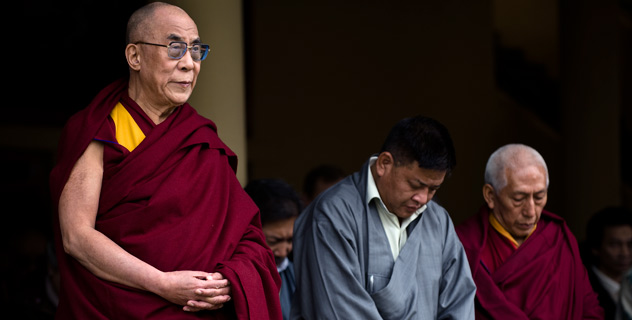 the Dalai Lama, Speaker Penpa Tsering (C) and Kalon Tripa Samdong Rinpoche observe a minute silence in memory of Tibetan martyrs on the 51st Anniversary of the Tibetan National Uprising Day, in Dharamsala, on 10 March 2010/Photo:Office of the Dalai Lama

March 10 was Tibetan Uprising Day. Around the world, members of the Tibetan diaspora and their supporters drew attention to the ongoing strife in the region, and they were joined by about 200 supporters on the front steps of the State Capitol in St. Paul. Tibetan Uprising Day commemorates the attempted rebellion by Tibetan against the Chinese on March 10, 1959.

As a result of the rebellion, the 14th Dalai Lama fled Tibet for India 20 days later, setting up the Central Tibetan Administration (which is often called the Tibetan Government in Exile) in Dharmsala.

“Tibetan culture based on Buddhist values of compassion and non-violence benefits not only Tibetans, but also people in the world at large, including the Chinese. Therefore, we Tibetans should not place our hopes in material progress alone, which is why it is essential that all Tibetans, both inside and outside Tibet, should broaden their modern education hand in hand with our traditional values,” he said. The statement from the CTA echoed this point.

“Since the demonstrations in Tibet in 2008, Chinese intellectuals inside and outside China have written more than 800 unbiased articles on the Tibetan issue. During my visits abroad, wherever I go, when I meet Chinese in general, particularly the intellectuals and students, they offer their genuine sympathy and support,” he said. This is probably a reference to Charter 08, a charter signed by Chinese intellectuals and human rights activists supporting democratization in China. The Charter was inspired by similar Charter 77 in Czecheslovakia.

The Tibetan Youth Congress also called on Google during the protest to continue to not cooperate with Chinese censors. Google stopped cooperating after the company alleged that the government hacked the email accounts of human rights activists.

The CTA statement criticizes the government of China for focusing its energy in attacking the Dalai Lama rather than addressing the problems faced by the Tibetan people. “Considering the Tibet problem to be a domestic issue that has to be resolved within the framework of the PRC, we are always engaging with the Chinese central government. However, the Chinese side continues to talk about His Holiness the Dalai Lama and the issue of Tibet and exert enormous pressure in connection with these issues everywhere – be it in their bilateral relations with other countries or in various international forums. It is clear to all of us that this is what actually drives the issue of Tibet towards becoming an internationalised issue,” it said.

Jigme Ugen, President of the Regional Tibetan Youth Congress congratulated the cities of Minneapolis and St. Paul for commemorating the day. Ugen said that the city of St. Paul was sent an email from the Chinese consulate in Chicago warning that honoring the day would be “harmful for Sino-U.S. relations,” but Ugen said that St. Paul did the right thing in honoring Tibet.

Ugen also mentioned that the city commissioner for Portland, Ore. had been pressured in person by officials from China’s San Francisco consulate not to honor Tibet awareness day. The city did anyway, and the state-run newspaper China Daily said that Portland’s decision “interfer[ed with] China’s internal affairs and [was] an open defiance of China’s state sovereignty.”