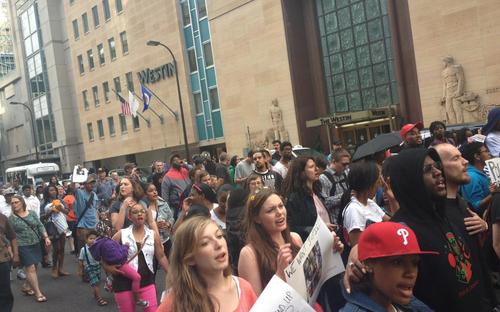 Loud chants of “No justice no peace!” and “Prosecute the police!” reverberated across Nicollet Mall as hundreds marched through downtown Minneapolis last Friday evening. About 250 protesters gathered in a rally organized by family and friends of 22-year-old Terrance “Mookie” Franklin, who was shot and killed by Minneapolis police in the basement of a home on May 10.

“We gonna fight, we gonna stand for Terrance. They’re gonna see our faces until we get justice, because we want to know what happened to Terrance,” said Walter Franklin, Terrance’s father, in front of a cheering crowd.

The family is demanding an independent investigation into the shooting, and for the police to be prosecuted. Members of the family said they doubt the Minneapolis Police Department’s version of the incident. MPD has not released many details about the shooting, but police have said Franklin fled and resisted arrest after he was identified as a burglary suspect. The resulting altercation led to two police officers having gunshot wounds, and the death of a motorcyclist who collided with a police car responding to the scene.

“We want those Minneapolis cops that killed Terrance, that slaughtered him in the basement, we want them brought to justice,” said Wallie Walton, Franklin’s uncle. “Terrance is unarmed. He’s not known for carrying a gun, so why did they slaughter him? He’s not a known criminal. He didn’t deserve to die like a dog.”

Walton added it is difficult for the family to gain closure because the police have released so little information.

“They’re not apologizing. It’s just another black man dead that they don’t have to worry about,” he said.

Organizer Mel Reeves said sources – whom he did not name – within the Hennepin County coroner’s office have told the family Franklin was shot five times in the back and twice in the head. However, this has not been confirmed by outside sources.

Emma Mercer, a close friend of Franklin, still has many questions about the incident and is confused about the different versions of events she has heard, she said.

Some in attendance also brought up parallels between the shooting of Franklin and the Trayvon Martin case. For many in the black community, Franklin’s fate is part of a larger national and historical pattern of racist police attitudes toward black men.

“What’s the reason of any unarmed black male getting killed at any time? We have to get to the cause of the police feeling the need to kill an innocent, unarmed [black male],” said Jermaine Alexander, a supporter of the family.

At a press conference last week, attorney Mike Padden said the “n” word can be heard twice in a YouTube video taken from across the street where Franklin was killed. The voices are presumably those of two police officers, he said – an accusation Minneapolis police have denied.

The rally ended with the crowd singing “Happy birthday Mookie!” as Franklin would have turned 23 last Thursday, a day before the march. Franklin’s father said the family will keep protesting until the family’s demands are met.

• OUR STORIES | Willie Walton: “He didn’t deserve to die like a dog.”

• OUR STORIES | Taharra Patterson: Terrance Franklin “could have been my child”