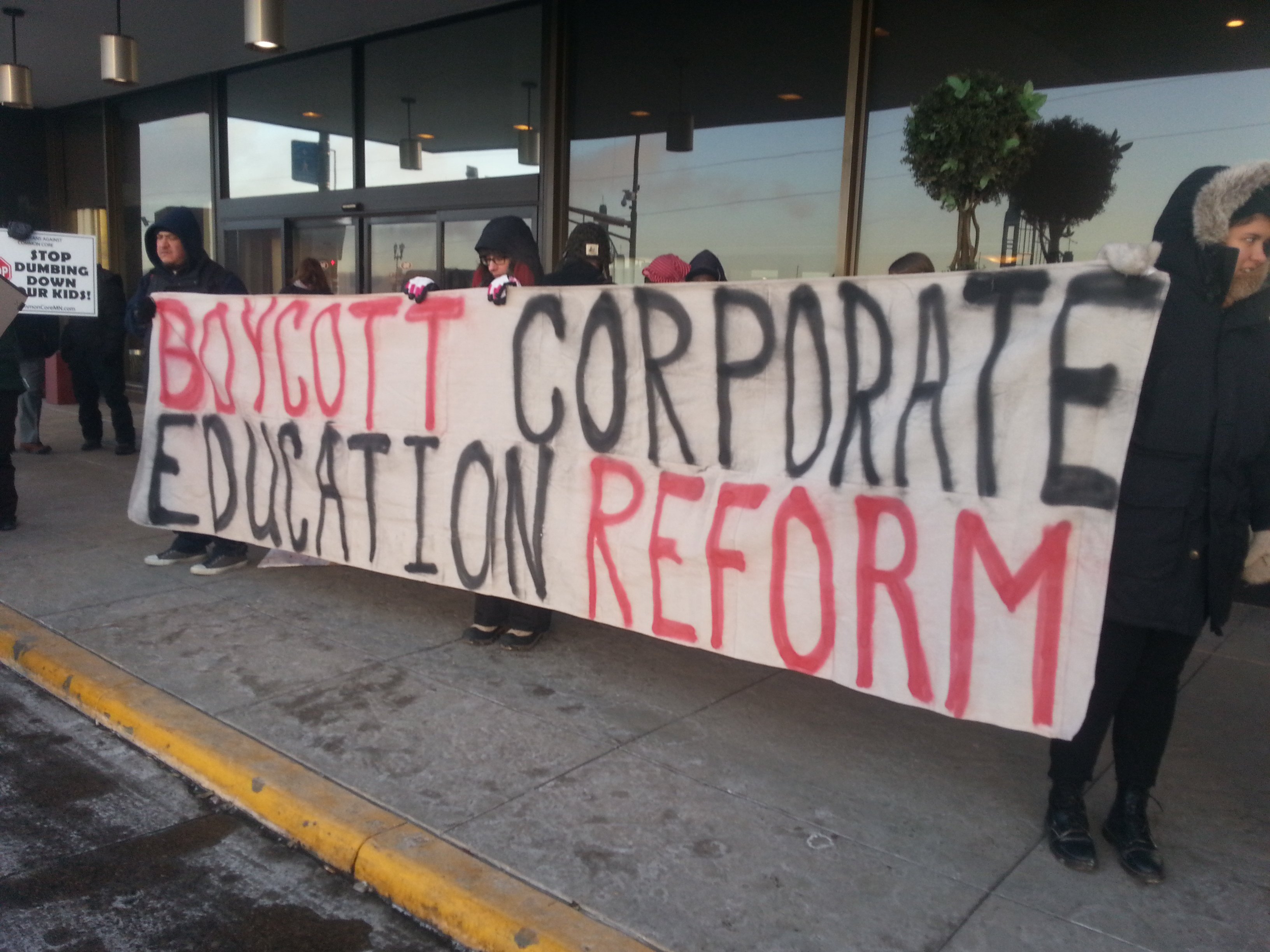 What was the most impressive thing I saw at the MN Chamber of Commerce’s Education Summit, held on February 6 in St. Paul?

It was not Michelle Rhee, who commands around $50,000 per appearance, or former Minneapolis mayor R.T. Rybak, who has transitioned into a new career battling the “achievement gap” at Generation Next. Instead, it was the small group of hardy local citizens who stood together in subzero weather to protest the Summit.

While I did not get to interview any of the protestors on the day of the Summit, I was impressed with their seemingly unified angle of protest, which I believe can be best summed up by a flier made for the event: “No conversation about us, without us, is for us!”

Some of the twenty or so protestors were there because they are strongly opposed to the implementation of the Common Core State Standards, which many believe were created and brought to the states in a very undemocratic manner. Some protestors were from the north Minneapolis based group known as NOC (Neighborhoods Organizing for Change), and they were objecting to conversations about the “achievement gap” taking place without the voices of those most affected by inequity in our society. Either way, the issue was a lack of representation and inclusion in discussions about what is best for “our” children.

Seeing this diverse group of people gathered outside in St. Paul in the early morning was an encouraging contrast to what I saw inside: a group of largely white, establishment-dwelling folks rubbing elbows, calling for more data, more accountability (for teachers and students, via tests, but not for society at large), and a greater focus on the children they see being “left behind.”

I believe that many inside the Summit do care about education and achievement in our society. Unfortunately, I also believe many have become convinced that they—meaning politicans, business people, and foundation fund managers, for example—are somehow best able to design education policies that will “liberate” the most powerless among us, all in the name of “college and career readiness.”

The education reform movement has relentlessly promoted this idea, and the notion that teachers and their unions are the sole masters of the “status quo.” That is why Rhee, her StudentsFirst employee George Parker, and other presenters so adamantly insisted that breaking labor policies, such as the infamous “last in, first out” lightning rod, will lead to greater student achievement.

It is strange, though, to have heard Rybak say that all students must graduate from college. No excuses, no exceptions. Why? Why is that our only definition of success? Why must all students be channeled through one narrow passageway on the road to adulthood? Whose dream is that, anyway? And how does a “relentless” (Rybak’s word) focus on test scores and data points help children become ready for college, which demands higher level thinking skills and self-awareness? Also, there was no discussion about who is going to pay for every single student to attend college.

As a witness to the Education Summit, I was dismayed by the lack of concrete, classroom-based policy ideas. Calling for more data, better data, and more accountability, which is what Michelle Rhee and the other presenters largely did, is nothing but a continuation of the market-based policies that have been defining federal and state education policy for years now. From a distance, it seems so simple, and like little more than a numbers game.