The Bureau of Land Management (BLM) is a part of the Department of the Interior. The BLM has proposed a draft of new gas and oil drilling rules. At this point the rules are very fracking-friendly. Fracking is the short-hand for hydraulic fracturing which is a process the gas/oil industry forces massive amounts of a toxic cocktail into oil/gas seams to force out the oil or gas.

The oil/gas industries are freaking out about the proposed rules:

So just how much will the proposed new fracking rule (for wells fracked on public lands) from the Bureau of Land Management cost drillers? The Western Energy Alliance hired the respected economics firm John Dunham & Associates to run the numbers. What they found was that if the new rule goes into effect as written, it will cost drillers an extra $96,913 per well on average, making it cost prohibitive to even bother drilling some wells. Perhaps that’s the intent? The new BLM rule will likely not affect Marcellus and Utica Shale drilling because there is very little federal/public land in the northeast. So why bother to report on it? Because Obama administration officials have expressed their desire to one day “encourage” (i.e. force) the new BLM rule to be used for drilling on private land as well (see Feds ‘Hope’ States will Use BLM Rules for ALL Fracking).

Fracking poisons drinking water and causes earthquakes. BLM doesn’t really take this into account. They’ve sided with the industry who have bought off locals with gag agreements. 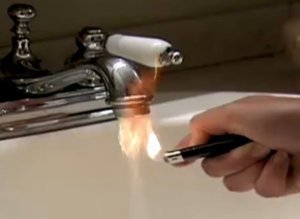 The gas and oil industries are urging the BLM to let states regulate fracking.

But others say states are well equipped to regulate fracking. They say the risks of fracking are overstated, and the impacts of fracking—both positive and negative—are mostly local, and different people balance them differently. So regulation should be left to the people who feel them most directly. Existing federal authority can handle whatever problems may spill across state lines, they say.

And that’d go well. Imagine a Republican Governor in neighboring state allowing rampant fracking near your mutual border which poisons the groundwater for everyone and induces an earthquake affecting both your states. Pass all the tough environmental laws you want, it wouldn’t matter.

What are the chances that the Dept of Interior or the EPA would step in to do anything?

-In the last draft of the rules, the BLM required companies to test the integrity and strength of each well bore to ensure they don’t leak fracking chemicals and hydrocarbons — and submit those results to the agency for review — before the well could be fracked. Under the new rules, companies can avoid obtaining or submitting this information for wells if they are similar to one that has been shown to have a strong enough cement job. Worse, companies don’t have to submit this information until AFTER fracking has occurred. Seems like a poor policing strategy for what has proved to be a major source of problems: Inadequate or incomplete well casings and cement jobs have been implicated in everything from gas and toxic chemicals bubbling up in local streams, to houses filling with methane and exploding.

Even state regulators and industry reps usually finger this as a more major issue than the fracking process itself, suggesting the need for really bomber regulation. “In almost all those cases where there was any indication that there were problems, it’s been tagged back to poor casing (the steel liner inside a well) and cementing,” Mike Paque, director of an Oklahoma-based group composed of state oil and gas regulators called the Ground Water Protection Council, told ProPublica and High Country News in a 2011 cover story.

-The new rules no longer cover some types of well stimulation techniques that may pose their own environmental problems, including acidizing, wherein acids are injected into a well to dissolve pesky sediments and mud solids that get in the way of hydrocarbon production.

-The new rule still requires companies to disclose the chemical composition of their fracking fluids after the well is fracked (again, wouldn’t you want to know that info BEFORE?). Now, though, it allows them to do it through FracFocus.org, an industry-funded website that even the Obama administration admits is not all that “facile” to search or compile data from. A Harvard study recently slammed the site as inappropriate for regulators to use. Moreover, companies could keep some chemical compositions to themselves as trade secrets, submitting only an affidavit claiming they are entitled by law to withhold it from the public. “If adopted, these disclosure rules would be much weaker than the rules in industry-friendly states like Wyoming and Pennsylvania,” writes Matthew McFeeley of the Natural Resources Defense Council. “Both states at least make companies submit trade secret information so that the validity of companies’ claims that information is proprietary can be evaluated.” The original federal proposal was, in fact, based on Wyoming’s rule, according to Environment & Energy Daily.

-Many environmental groups have also slammed the federal rules’ new deference to regulations drafted by states and tribes, allowing both to seek variances if their own are as or more stringent than federal standards. Given that this is similar to how parts of some bedrock national environmental laws (e.g., the Clean Water Act) work, though, it’s unclear that this is a bad thing, provided federal standards are strict enough.

Perhaps it should come as no surprise that the rules are more industry-friendly than before. According to E&E, Deputy Assistant to the President for Energy and Climate Change Heather Zichal met more than 20 times in 2012 with industry groups and company executives lobbying on the proposed rule, but only four times with environmental groups.

RWNJs in Congress are trying to pass a law to invalidate the BLM rules before they even get implemented. Hopefully, this is just as much of a waste of their time as repealing Obamacare. Sadly, the Obama Administration is fracking-friendly enough that this might get considered.

House Republicans this morning began a pre-emptive legislative strike to block new draft rules from the Bureau of Land Management governing the controversial but widespread technique of hydraulic fracturing for oil and natural gas.

Flores, who is the former CEO of Phoenix Exploration Co., a Houston-based oil and gas exploration firm, said blocking the BLM draft rule is critical to safeguarding the nation’s manufacturing renaissance and reducing greenhouse gas emissions through the increased production of natural gas.