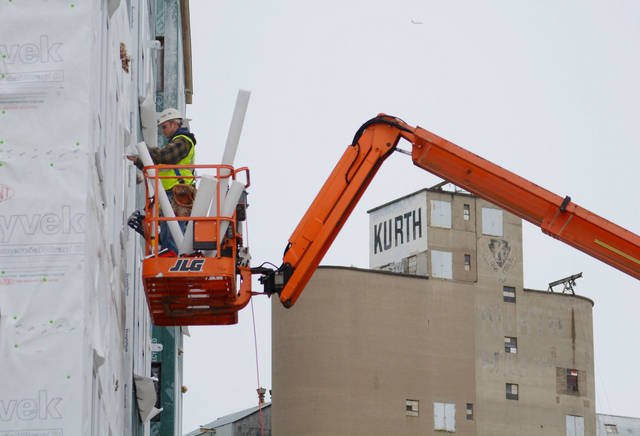 A construction worker in a cherry-picker works on the new student housing apartment complex being built by Weis Builders in Prospect Park on Tuesday afternoon. (Photo by Patricia Grover)

Prospect Park is welcoming major redevelopment and could look dramatically different in the coming years.

With the Green Line light rail cutting directly through the district open this June and property values on the rise, the neighborhood near the University of Minnesota is hoping to cash in and add density in the process.

The property that housed Habitat for Humanity was recently snatched up, with more likely to follow.

“The land is very valuable,” said Prospect Park 2020 Project Manager Brain Golberg, “and it’s just doing nothing but getting more valuable with the light rail coming.”

Prospect Park 2020’s top catch so far was convincing Brooklyn Center-based Surly Brewing Co. to build its $20 million destination brewery in the neighborhood just a few blocks away from TCF Bank Stadium. The brewery is scheduled to open in late 2014.

The neighborhood is far from finished, Golberg said, and 2020 wants to add 2,500 housing units, 1 million square feet of office space and an “adaptable” parking structure, with portions that can be transformed into residential or retail space.

“I’m not sure that there are any adaptable parking structures in the country that are designed that way,” he said.

Golberg said the district would share the parking structure, which will aid all incoming developments. He said the adaptable structure would provide Prospect Park flexibility over time in case mass transit and biking make parking less of a priority.

Prospect Park 2020 wants to exhaust all of Prospect Park’s unused land with high-density housing projects and businesses in order to attract a grocery store and make the entire neighborhood completely walkable, Golberg said.

“The neighborhood wants sort of New York City density,” he said. “That’s three times the amount you generally see in the Twin Cities.”

Aeon, a nonprofit developer specializing in affordable housing, will close on its $1.25 million purchase of the Habitat for Humanity site in April, with plans to demolish the building and construct a housing project, Aeon Vice President of Housing Development Gina Ciganik said.

The Cornerstone Group and Fountain Residential Partners are each building housing projects in the area with 200 or more units each.

Aeon is still determining what type of housing the five-story, 70-unit complex will provide and is discussing best use with the neighborhood group, Ciganik said, but the project won’t be student housing.

The project will gain funding during 2015 and begin construction in 2016.

“The neighborhood has a vision to really create a different model of a community there,” Ciganik said. “One that is sustainable.”