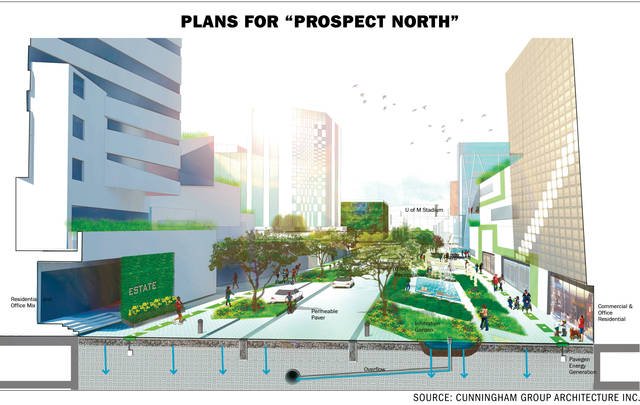 As some areas near the University of Minnesota grapple with preserving historic character, one neighborhood is attempting to redefine its presence with plans for a more futuristic community.

The plan, called Prospect North, is built around the idea of shared infrastructure. For example, that could include district systems that deliver heating and cooling to the entire neighborhood surrounding the Prospect Park light rail station and stretching northwest toward TCF Bank Stadium.

With the goal of heightened efficiency in mind, Prospect Park planners have already started setting goals for things like energy use, carbon emissions, transportation, water consumption and wastewater disposal, said John Carmody, founding director of the Center for Sustainable Building Research at the University.

“[The neighborhood is] not just trying to do one thing; it’s trying to do multiple things at the same time,” he said. “Ultimately they want to be a cutting-edge, sustainable community of the future … something that is resilient for the long run.”

Coupling advanced infrastructure with the neighborhood’s ideal location along the Metro Transit’s Green Line light rail and next to the University sets the project apart, said Dick Poppele, a collaborator on the project from the Prospect Park East River Road Improvement Association.

“The neighborhood organization started thinking about this area about 10 years ago, when we realized that the light rail would be going through,” he said.

Neighborhood leaders, like Poppele, have long recognized the potential for an “innovation park” but only recently formed Prospect Park 2020 Inc., a group of community and business leaders who are collaborating to guide the development and make the neighborhood’s vision a reality.

Prospect North will revolve around the “Green Fourth” project, a redesign of Fourth Street Southeast into a pedestrian- and bicycle-focused district with wide sidewalks and several public gathering places.

While much of the project is still in the primary planning stages, the Metropolitan Council has already approved funding for a storm-water management system, said the city’s transit oriented development manager, David Frank.

The $1 million grant awarded earlier this year needs to be spent by 2016, Frank said, leaving the neighborhood with little time to plan for extra additions to the existing infrastructure, like rainwater gardens along the street and some green roofs.

Aeon is one of a handful of developers involved in the project, and it has plans for a 65-apartment housing complex in Prospect North, Lehnhoff said, which may use a green roof to help improve energy efficiency.

“We want to build in a way that we’re still proud of these buildings in 40 to 50 years,” he said.

He stressed that building strong relationships between the neighborhood boards and developers is essential to transforming Prospect North into an area that provides an entire range of housing options, from affordable to market-price.

He said another key partnership for the project is with the University, with whom planners want to create a science park or innovation district.

“The hope was that this area could kind of become a living laboratory, beyond maybe even the arts and the sciences,” Poppele said.

Carmody said the innovation park could offer a watering hole for University researchers to share their forward-thinking ideas among themselves and with entrepreneurs and nearby business incubators.

“If you have this really cool, state-of-the-art development right next door … doing research on it and working in partnership with the University makes total sense,” he said.

Colleen Carey, president of The Cornerstone Group, which has plans for two sites in the upcoming neighborhood, said Prospect Park 2020’s unique, collaborative approach to revamping the area drew her company’s involvement.

“We are trying to get everybody to the table to create a whole new kind of city within a city,” she said, “an innovation district that showcases new kinds of technologies and new kinds of ideas of what a community ought to be.”